I this novel read back in 2013-2014. The context basically composed of a near future, where mankind had made contact with an advanced alien species. These aliens passed down technology in the form of a brain implant that was located in either the right or left temple (humans also had the choice of having the implant or NOT) that would store your memories/consciousness and then after you died, this implant would become warm and hum/vibrate. Your body was picked up and your implant would be beamed up these huge light towers. Then you would be resurrected to "explore the stars" with these aliens. You would be able to see your resurrected loved ones in a "room" before they left for good.

There were multiple characters with multiple story lines. I enjoyed the book so much I wrote down every character and backstory on the inside of the paperback cover. The title of the book was the same name these aliens called themselves. It was something like "Kathani", but I'm not sure.

Could this be Kéthani by Eric Brown?

It takes an alien race to show us what humanity truly is. This is the irony faced by a group of friends whose lives are changed forever when the mysterious alien race known as the Kethani come to Earth bearing an amazing gift: immortality. These superbly crafted episodes deal with human emotions in the face of the vast consequences of the alien arrival, and show how people across the world react to this benign invasion, how ultimately we evolve as we gain the stars. 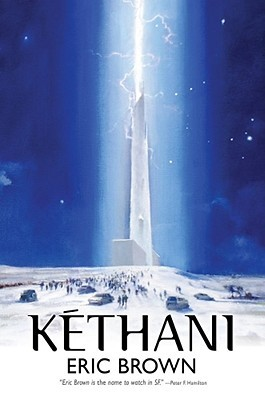 9
Children’s books, one in space setting, the other in a jungle
28
Novel set on a generational ship with a unique "chess"-like game
4
Novel scifi/detective series, near future, near space
3
Novel identification about a near future war between the west and Japan
15
Post apocalyptic sci-fi book where Earth is destroyed and humans from the Moon and Mars go on a rescue mission
9
Book where aliens implant a human brain in a fighting machine
3
Fairly recent SF novel set in the near future, Alcoholics Anonymous is involved
3
Paperback near-future sci-fi novel in which there is an ice age coming