How did Sela know that Data was captain of the Sutherland?

SELA: Yes I know and so does Picard. He's giving us exactly what we need and he expects us to take it. No. We won't step into Picard's trap. We will disable part of his network here, where they're weakest. We'll direct the energy burst right at the ship with the android Captain.

How did Sela know that Data was in command of the Sutherland? (other than the dramatic out-of-universe reason that it provided further tension to the C plot of Data's ability to command and interact w/ a horrible first officer) 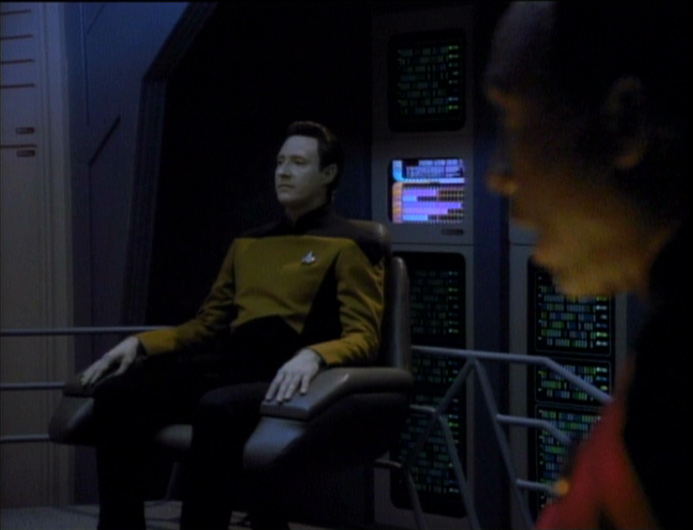 As far as I can tell, it was never explained in-universe or even out-of-universe, except as a dramatic plot device as you pointed out. There is no explanation in the episode, nor could I find any on Memory Alpha or Memory Beta.

However, given the efficiency of the Tal Shiar, they did manage to have one of their spy pose as a Vulcan ambassador for quite a long time after all, it isn't too far fetched to think that they managed to steal the information in some ways.

Given that this was a last-minute decision, I would guess that they intercepted the communication between the Enterprise and the Sutherland announcing the field promotion of Data as Captain of the Sutherland for the duration of this mission.

It's even possible, as Valorum pointed in his comment, that this sort of information isn't even classified.

11
How does Captain Picard "know" that Armus is immortal?
11
What happened to Commander Shelby after TNG episode Best of Both Worlds part II?
4
How can Data know nothing about the Orient Express?
24
How was the pronunciation of Data decided?
6
How did the Soong hologram know that Juliana Tainer left him?
24
How did Data not know what Aldebaran Whiskey was?
9
Was Geordi and Data's "invasive program" to annihilate the Borg ever attempted again?
31
How does Data know about his off switch?
7
Doesn't Data know the Kobayashi Maru?