Where in the books does it say the first victor of District 12 was female?

This question is directly related to the other one I asked: Who was District 12's First Victor?. When I was researching about the victors I stumbled across this:

What surprised me about this was: "Unknown Female Victor". I have been struggling for a while now to find the book's reference to her.

It doesn't, in the original trilogy.

We don't really know anything about the other District 12 victor who wasn't Haymitch, except the facts that they existed and that they died prior to the start of the first book.

It's important to be aware that the Hunger Games Wikia is extremely unreliable. Even among Wikia sites, all of which are editable by anyone and many of which are unreliable sources of canon information, the Hunger Games Wikia really stands out as being full of unsourced and/or clearly wrong nonsense. For example, see this page (also this answer), which says (without a source, naturally):

According to the Capitol, Panem has a population of 4,556,778 people. However, adding up the known populations of the Capitol and 12 districts gives it a total of only 1,905,286 people.

So ... not only is the population of Panem known down to the last decimal place (which precise moment does this figure come from, I wonder - between which births and deaths?), but it's also a figure which consists of 4, 5, 6, 7, 8 in the right order? What are we here, statisticians or numerologists? I really can't take this seriously.

In this case, I can see one possible source for the misinformation: the following book quote.

In the history of the Games, there have been seventy- five victors. Fifty-nine are still alive. I recognize many of their faces, either from seeing them as tributes or mentors at previous Games or from our recent viewing of the victors' tapes. Some are so old or wasted by illness, drugs, or drink that I can't place them. As one would expect, the pools of Career tributes from Districts 1, 2, and 4 are the largest. But every district has managed to scrape up at least one female and one male victor.

It would be possible to misinterpret this as meaning that the two District 12 victors prior to the Seventy-Fourth Hunger Games must have been one female and one male. However, because this quote is from Catching Fire, in the context of the reaping, it just means that it is possible to get enough tributes for the third Quarter Quell. The "at least one female and one male" victor from District 12, in this context, refers to Katniss and Haymitch+Peeta. So it doesn't tell us that the first District 12 victor was female.

It does, however, state this in the prequel book, The Ballad of Songbirds and Snakes. Either the wikia entry was edited by someone with advance knowledge, or (more likely, especially given that when there was a name it was wrong), it was a coincidence.

As a supplement to Rand al'Thor's answer, you can follow the progression of the page in question to see what happened. The assertion that the other District 12 victor was female does not appear in the actual article. It only appears in the sidebar, and it was only edited in there in the last year. Below are screenshots showing the revisions which changed how the other victor was referred to:

When the sidebar was first added, the other victor was not listed at all: 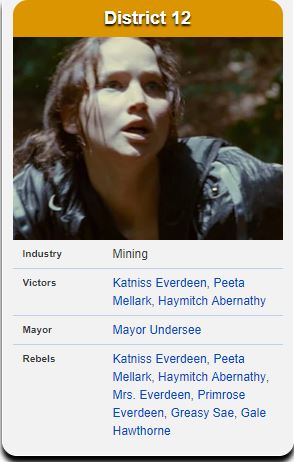 Then someone added the other victor, described as:

and another unknown victor 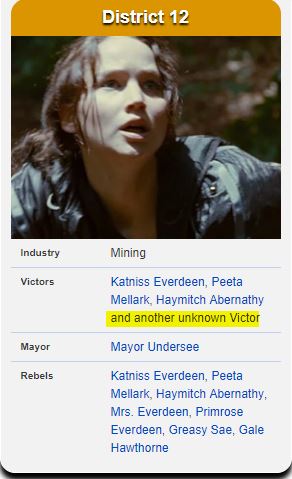 This was later simplified to: 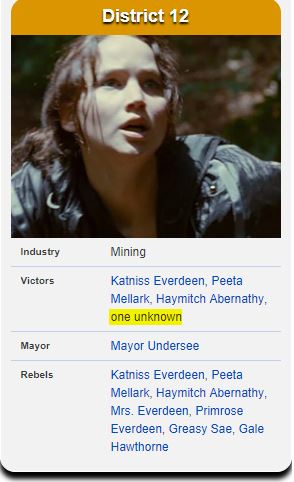 Eventually, someone added in a (vague) parenthetical source: 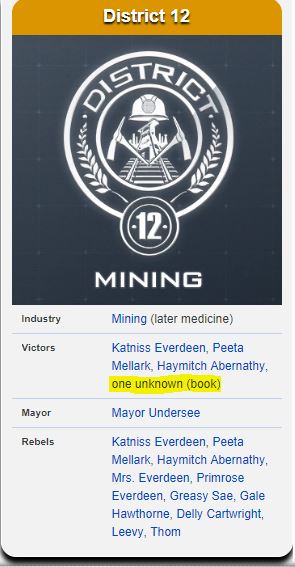 Then the victor was given a specific (female) name when it was edited to: 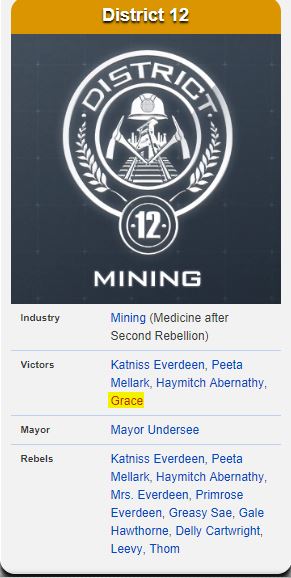 This was immediately (same exact timestamp as previous revision) changed back to: 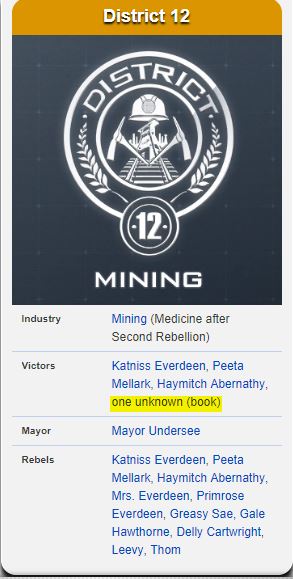 Then it was slightly modified to: 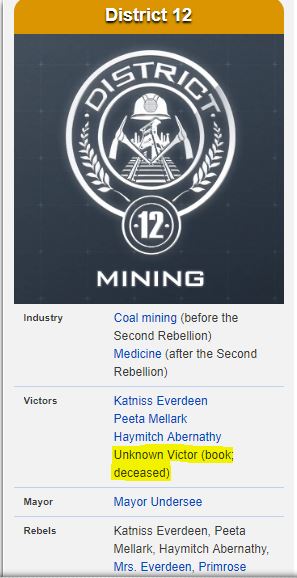 The next day the word "deceased" was removed: 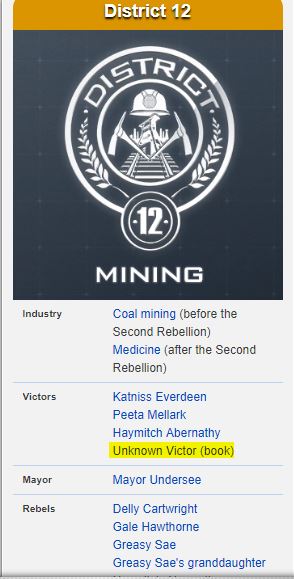 And finally someone threw in the word "female": 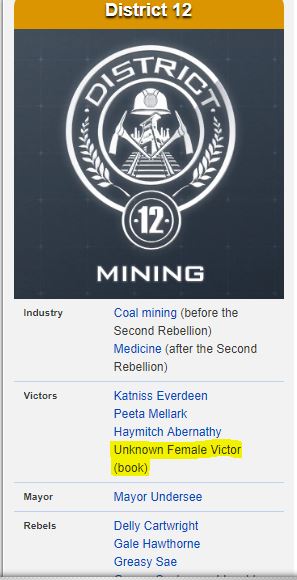 The user who made this edit does not seem to have provided any evidence for this change. (The parenthetical "book" was already there from the previous versions.)

9
Does music exist in Panem? And if so, what kinds of music?
14
Did they actually hold the 76th Hunger Games?
14
What is the population of Panem at the start of The Hunger Games series?
9
How long did the 74th Hunger Games last?
5
Who was District 12's First Victor?

7
How many people guessed what Katniss was going to do at the execution?
7
Why was it so important to have a victor in the Hunger Games?
3
Why couldn't Peeta's tracker have been removed on the way to District 13?
6
Is President Snow sadistic or simply ruthless?
9
Why did both Cashmere and Gloss take part in the third Quarter Quell?
6
Why did Madge give Katniss the mockingjay pin?
11
Where is the ruin in District 13 in The Hunger Games Mockingjay Part I located in real life?
5
Who was District 12's First Victor?