A dozen years ago, I caught about two minutes of an animated show on television. I don't know the name of the show or which channel it was on, but I do know that it was quite late at night in spring 2006 and I've been wondering about it occasionally ever since.

What I do have is a fairly narrow time frame for when I saw it, because I was at the first bar to re-open in Bay St. Louis, Mississippi after Hurricane Katrina, so it was definitely between April and June of 2006, well after dark but before 1am Central Standard Time (there was still a curfew in effect). It must have been available via satellite because the cable companies still hadn't reconnected that part of the coast. The bartender was channel surfing, so I didn't catch much, and I wasn't able to hear any of the sound due to the noise at the bar, but it looked incredible, and I remember only the following:

That would be Korgoth of Barbaria, an animated pilot that was not picked up. It aired in the summer of 2006.

Korgoth is infected with a deadly parasite by Gog-Ma-Gogg and extorted to steal an item known as "The Golden Goblin of the Fourth Age" from the wizard Specules, who Gog believes to have recently died. He journeys with a group of Gog-Ma-Gogg's henchmen to Specules' castle, picking up a girl and killing several things along the way. The group reaches the castle and begin to plunder it. As Korgoth searches for the Golden Goblin, Specules returns, explaining that he was on vacation. Specules uses his magic to kill or incapacitate all but Korgoth, who proves too strong for the ridiculous creatures that the wizard conjures through chewing gum. As a last resort, Specules uses his magic directly against Korgoth; however, he is knocked off-balance and accidentally kills Korgoth's girl. Angered, Korgoth takes a two-pronged candle stick holder and impales Specules through the eyes, only to find that the wizard has magically transferred his head onto the dead girl's body. Specules proceeds to fly out the window. Korgoth returns to Gog-Ma-Gogg with the Golden Goblin (a simple novelty item) and gets the elixir for the deadly parasite, though the elixir takes many seasons to take effect. Korgoth is last seen walking away, pulling a cart full of medicine bottles.

The full episode is available from adultswim.com.

As correctly identified in this answer, the show was indeed Korgoth of Barbaria (NSFW). The 22 minute pilot episode aired on Cartoon Network's Adult Swim on Saturday, June 3, 2006 at 11:30 PM CST, which was definitely when I saw it. The short glimpse I caught of this show (even without sound) stuck in my mind for over 10 years, probably because it mirrored the surreal surroundings of the destroyed town I was living in at the time. I'm adding this answer to fill in some of the blanks from my question (and my memory). 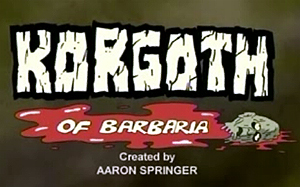 From the IMDB entry for Korgoth of Barbaria (2006):

Unsold TV pilot and a dark, violent and gory sword and sorcery spoof set in a post-apocalyptic new dark age about a Conan-like barbarian warrior hired to steal a golden goblin from a dangerous wizard who lives in a tower in the sky.

The pilot was written by Aaron Springer (Samurai Jack, SpongeBob, Gravity Falls) who also co-directed the episode with Genndy Tartakovsky (producer of Samurai Jack and Primal). The voice actors included John DiMaggio (Samurai Jack, Futurama, Gravity Falls, Disenchantment, Rick and Morty) and Tom Kenny (SpongeBob, Adventure Time, Rick and Morty) and featured an absolutely epic thrash metal soundtrack, composed by Lee Holdridge (Beastmaster, Moonlighting, The Mists of Avalon). The episode was produced by Cartoon Network Studios and Williams Street and was rated 'TV-MA'. Korgoth was originally scheduled to run as a full season in September 2006, but was never picked up by the studio.

A description of the show from Adult Swim:

In a dark future wasteland, the great cities have risen and fallen, primordial beasts have reclaimed the wilderness and thieves and savages populate sparse, dirty towns. From the frozen north emerges a warrior known as Korgoth, and his merciless savagery may be his only key to survival.

The above quote is basically a paraphrased version of the voice-over in the title sequence:

The Great Cities have risen and fallen. Civilization's grip on mankind has grown weak and arthritic. Dark forces seek to renew forgotten covenants, and primordial beasts reclaim the wilderness. Out of the frozen north, a man emerges - a man of a barbaric age, whose merciless savagery may be the only key to his survival. They call him...Korgoth!

The official Korgoth of Barbaria poster (also a frame from the title sequence): 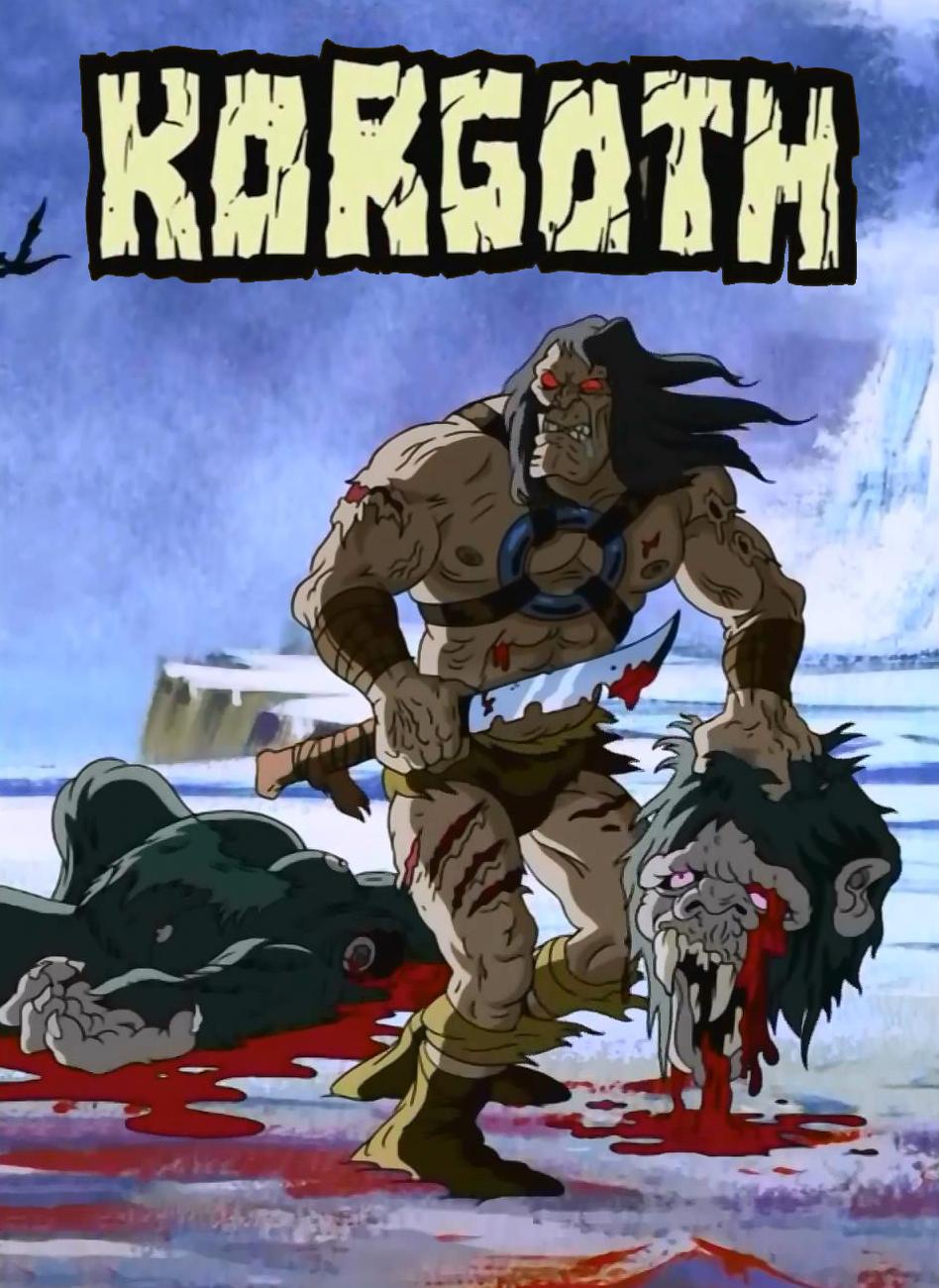 Reasons for not picking up the show

By the end of 2007, the only mention of the show on the Adult Swim website was the following graphic: 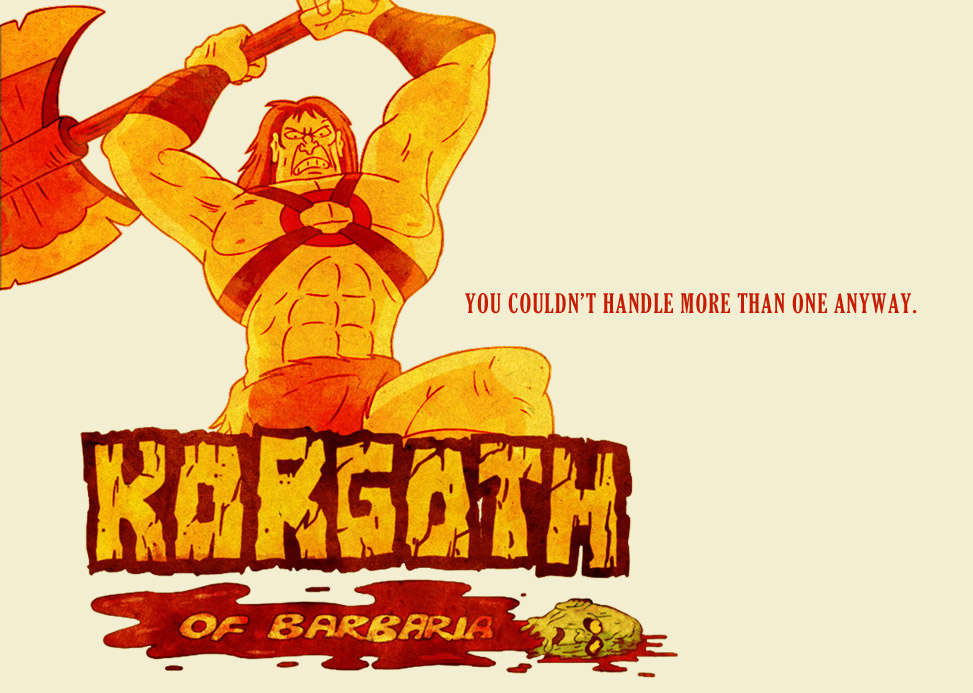 On October 31, 2010, Adult Swim aired a 15 second bumper listing shows that were not picked up: 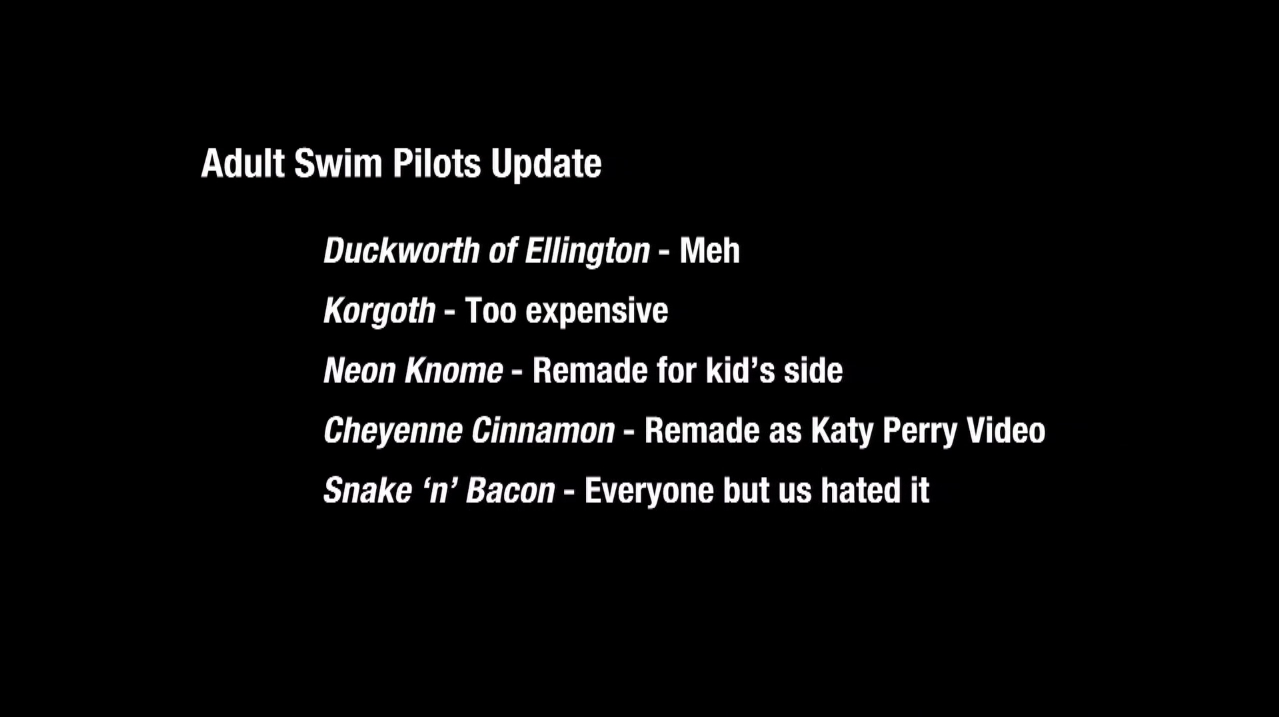 A comment on the pilot episode on YouTube (by ChiotVulgaire, June 2018) provides some excellent insight into the context of Korgoth's cancellation:

...this show's production costs were simply too big. It's hand-animated with the vast majority of its assets originally made for the show, and it doesn't use any time-and-money saving techniques like tweening or digital coloring. Even the backgrounds are classic handmade matte painting. Not to mention they kinda shot themselves in the foot with some big-name voice actors (I hear John Dimaggio, Tom Kenny, and Diedrich Bader). To make matters worse, CN is still trying to move to smaller production value stuff including more live-action content and shorter episode formats. Essentially, Korgoth is everything they were trying to move away from, which is a shame because as awesome as everything is, the show itself is more than the sum of its parts. There's a reason they still show it now and then on Adult Swim.

Maybe if Korgoth got picked up by an animation studio that is good at doing this kind of work for cheap it could live again, but there's simply no way CN in it's current state will even attempt a second episode of this show, let alone an actual season.

The painted backgrounds in the pilot episode were sketched by Justin K. Thompson and painted by William Wray, and several of Thompson's early concept sketches for the show are available here (original source here, and compare to one of his earlier works from 2004): 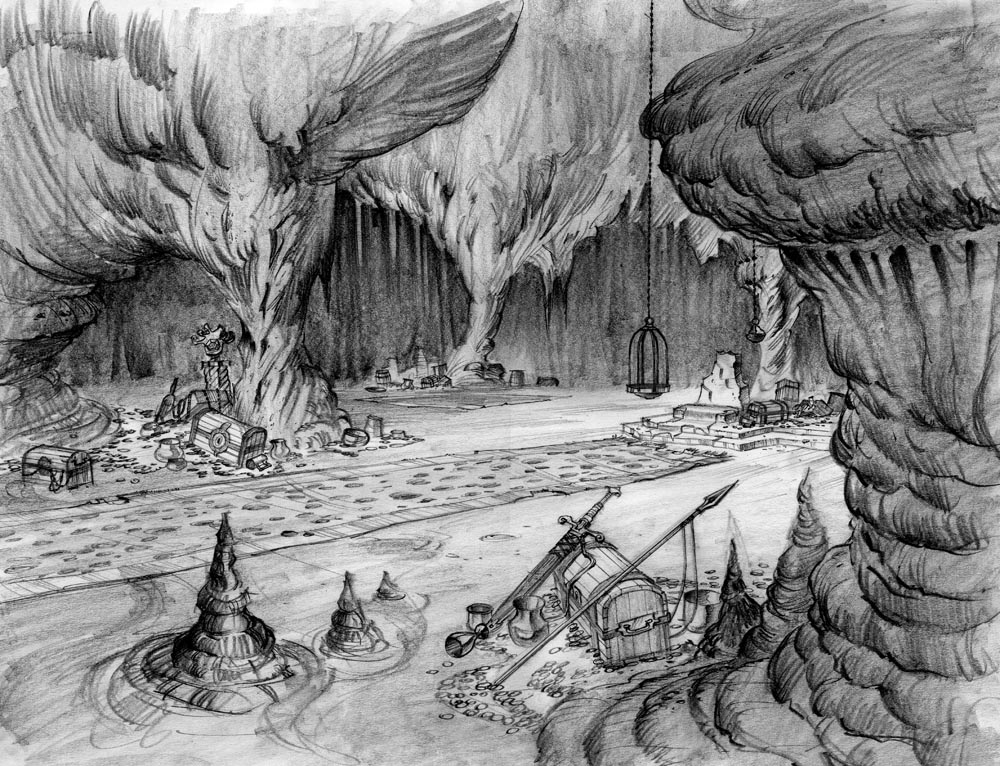 The backgrounds were layed out by one of the best young background artists out there right now Justin Thompson. I did some final paintings and some rough keys, here is a selection along with a fake title card. The big bar pan was cut for time so this will be the only place you will see it.

Wray additionally explains the time-saving process he used to paint the backgrounds, and pointed out that the Korean studios (typically heavily relied on for reducing animation costs) would not (at the time) use this process for time-saving. This explains the "too expensive" quote in the Adult Swim bumper:

90% Cell paint with some small digital enhancement. Mostly contrasts and soft light. Drove everyone crazy because everyone is convinced the Korean [studio] can't understand that concept. One of my goals in life is to drag them into the digital age. Mixing the two saves so much time and give[s] you so much more. I print the drawing out directly onto Water color paper and paint them up fast and sloppy for the vigor of it. Then I fix the slop and enhance on Photoshop. In a pinch in the end I just took the pencil directly into Photoshop and I think they look a little graphic, but still good.

And also indicated that the backgrounds could have been used better by the animation studio (likely involving scene framing and panning, or color use/style by the overlaid animation):

...the Korean [studio] did a preety (sic) bad job on the backgrounds, but that just kind of added to the joke of the show 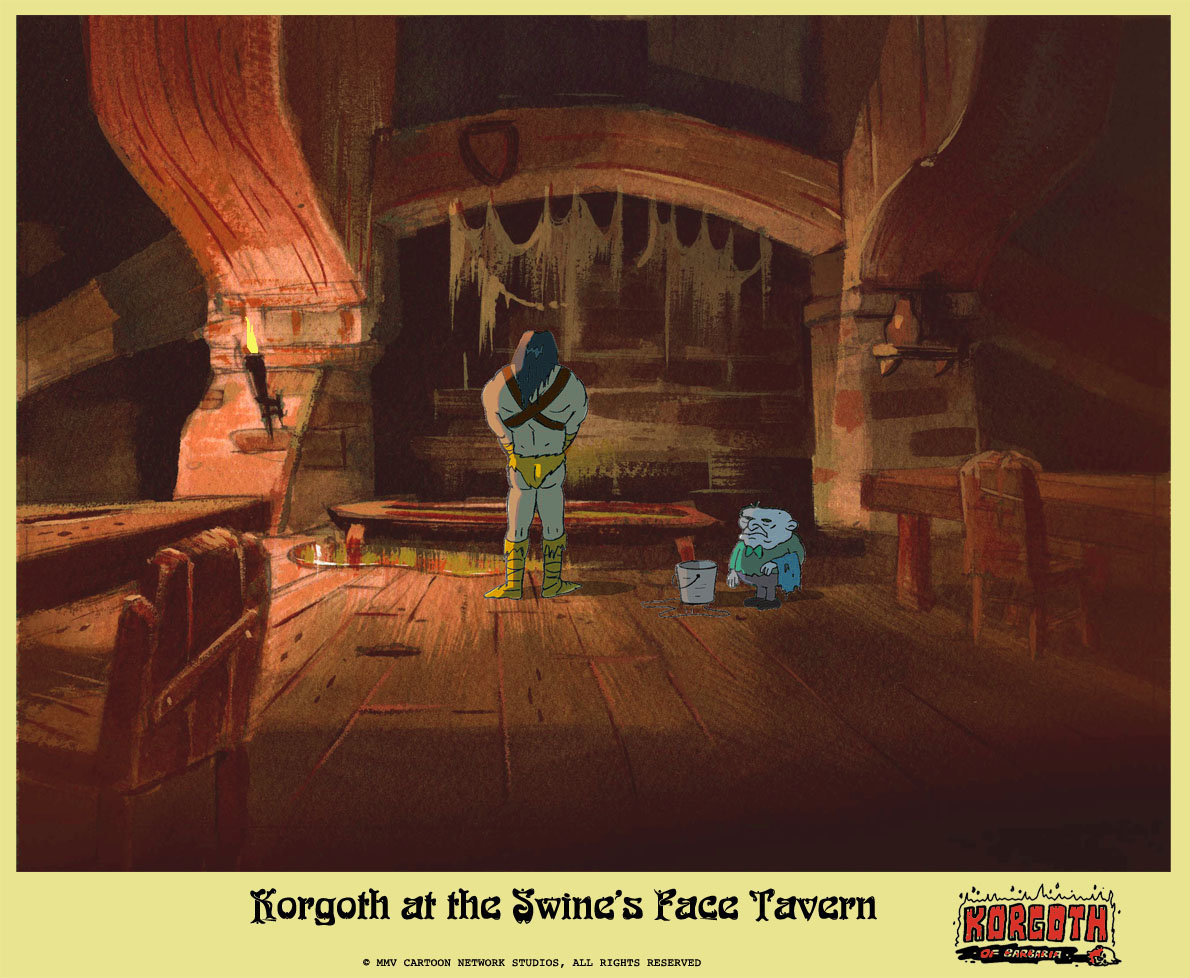 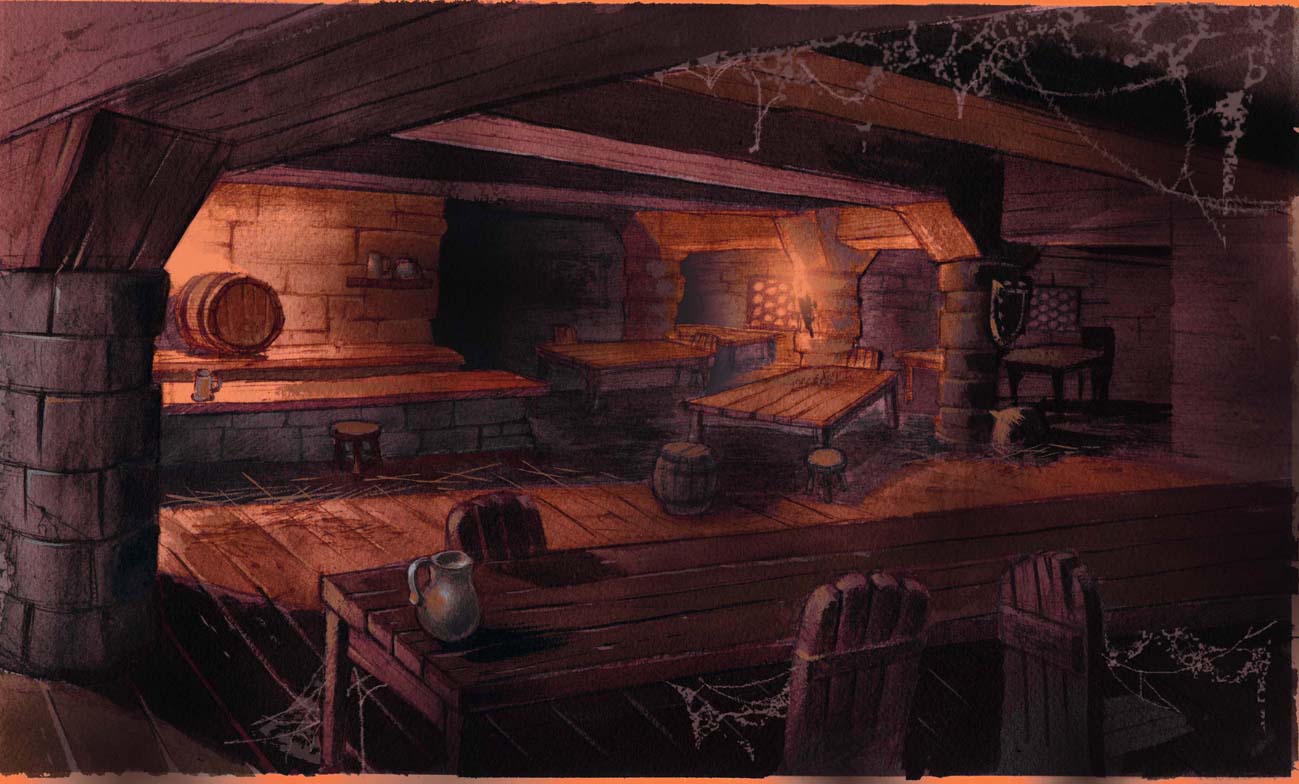 On October 27, 2009, the pilot episode of Korgoth of Barbaria was released on DVD as part of the 7-disc [adult swim] in a Box, with Korgoth and four other pilots included on disc 7. 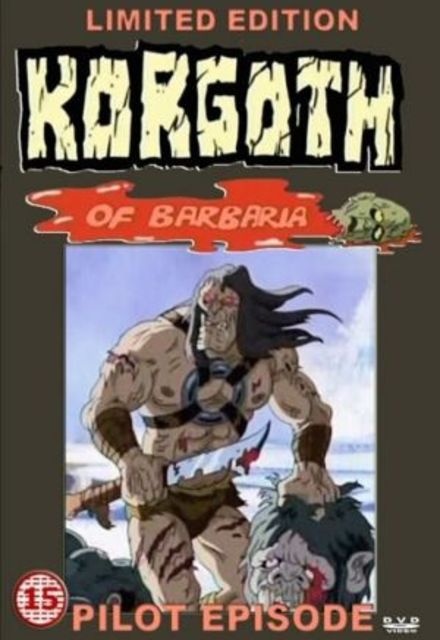 Since March 7, 2015, the complete episode can be streamed from the Adult Swim web site.

On October 7, 2019, Genndy Tartakovsky launched a new animated series on Adult Swim, named Primal (IMDB), which is available on iTunes Movies as a compilation of all episodes in a single "movie". In addition to sharing several artists and cast members from Korgoth of Barbaria, the design of the main characters (a caveman and dinosaur) bear more than a passing resemblance to Korgoth and the dinosaur from the opening credits of Korgoth of Barbaria, although the artistic style is less detailed and closer to that of Samurai Jack (perhaps this lowered production costs to address the problem with Korgoth of Barbaria). 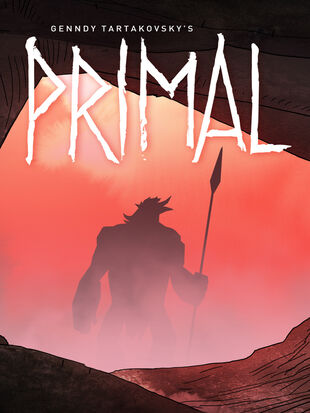 Additionally, the tagline of the show borrows several phrases from that of Korgoth of Barbaria:

Primal features a caveman at the dawn of evolution. A dinosaur on the brink of extinction. Bonded by tragedy, this unlikely friendship becomes the only hope of survival in a violent, primordial world. 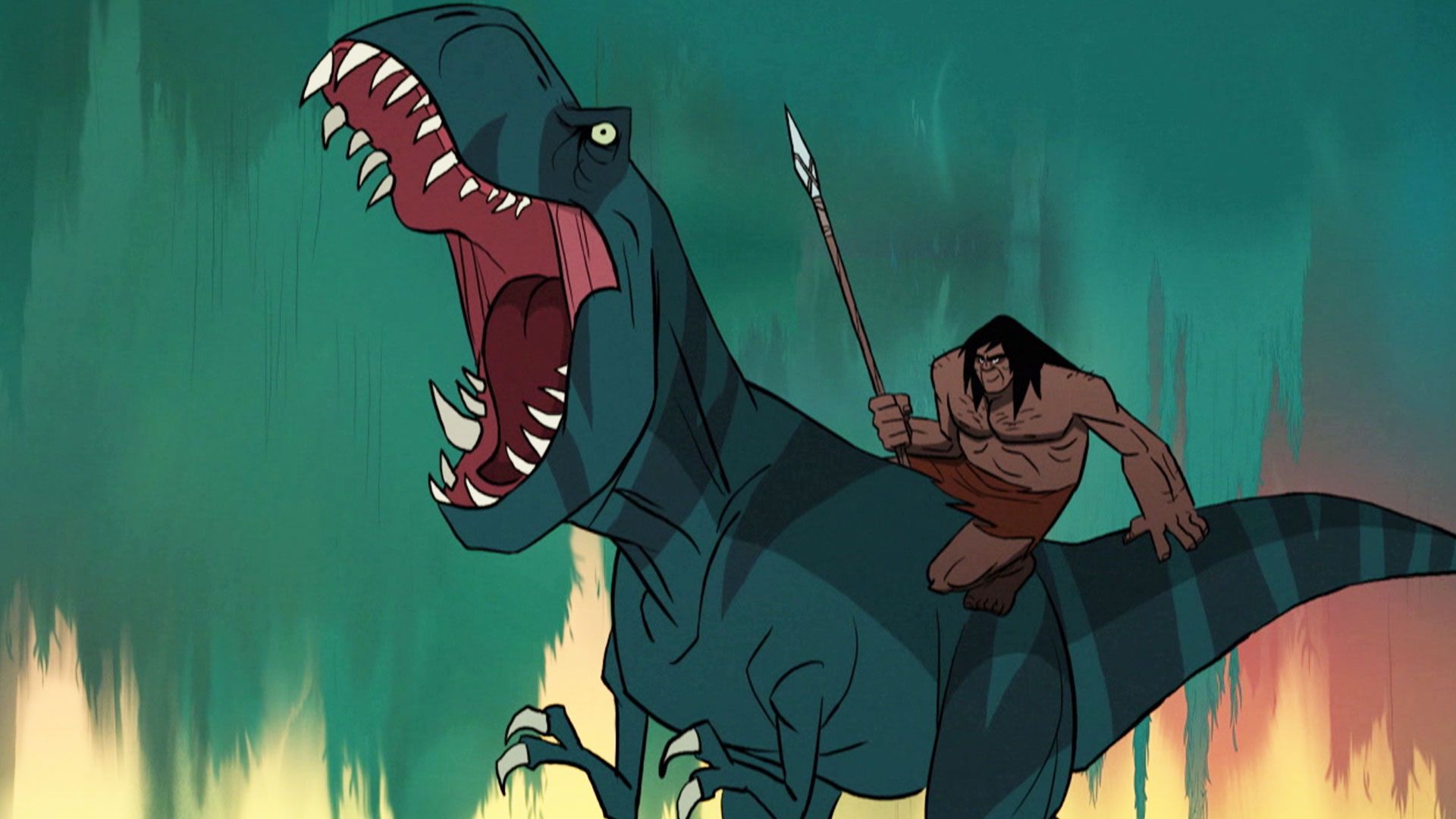 Compare and contrast the above to this opening credits scene from Korgoth of Barbaria:

There are stylistic differences but many of the same elements are present in the new show. That doesn't make Primal a true successor to Korgoth of Barbaria, but it looks like it may be the closest thing we're ever going to see. One thing in particular to note is the better match between the backgrounds and animation in Primal as contrasted to Korgoth (less detail, more stylized, better blending) - this is what William Wray must have been lamenting about the production studio's work on Korgoth.

Not the answer you're looking for? Browse other questions tagged story-identification tv sword-and-sorcery animated-series or ask your own question.

8
Are there any examples of feminist works in the Sword and Sorcery genre?

4
1990s film, knockoff of Alien and Predator franchises, included a jetpack and a fanged frisbee
8
Animated fantasy show about a red-haired girl and two boys
10
A short story that was a "Conan the Barbarian" parody -- kill the sorcerer Reh, "rescue" the princess
9
A Conan the Barbarian story about a city in which everyone is constantly high with some kind of lotus
5
Animated TV show about King Arthur and the Knights of the Round Table
10
Two Scenes From A Conan The Barbarian Story?