Why does Kif still work for Zapp?

Why does Kif still work as Zapp Brannigan's "assistant" if he hates his job?

Because it's pretty much the only life he knows. Remember the episode where they are stripped of their positions and he works for Leela? He can't stop going on and on about working for Zapp. It's not his ideal life, but he doesn't know anything else.

Because of loyalty and friendship from before Zapp became a terrible person.

In Futurama Comics #76 "Captain Brannigan: The Windbag Soldier" we learn that Zapp Brannigan was one of the finest recruits the DOOP had ever seen. 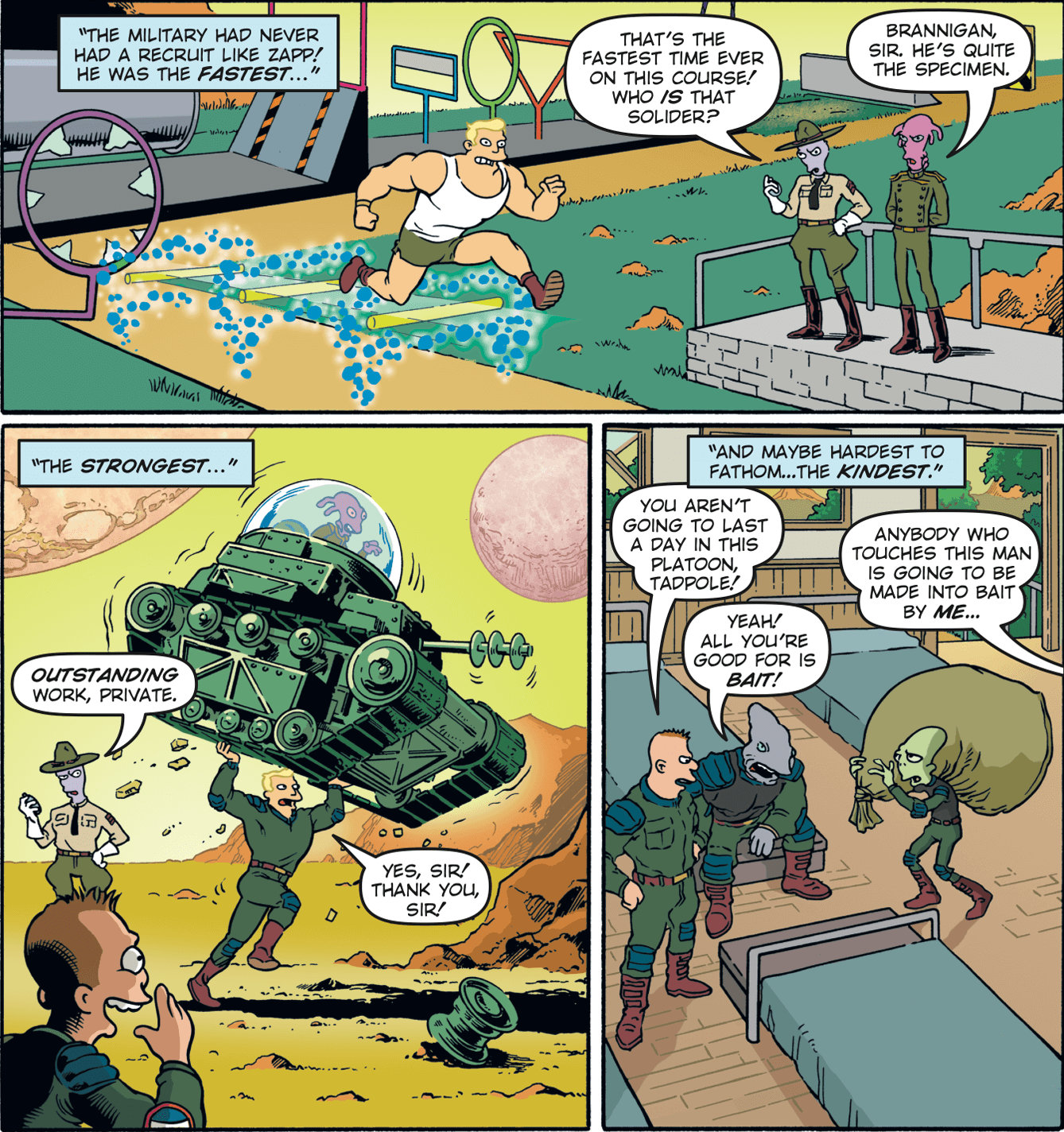 Kif and Zapp became friends when Zapp stood up to soliders bullying Kif, who was then a scrawny new recruit. Zapp trained Kif personally, and eventually they fought side by side as a team to keep Earth safe. 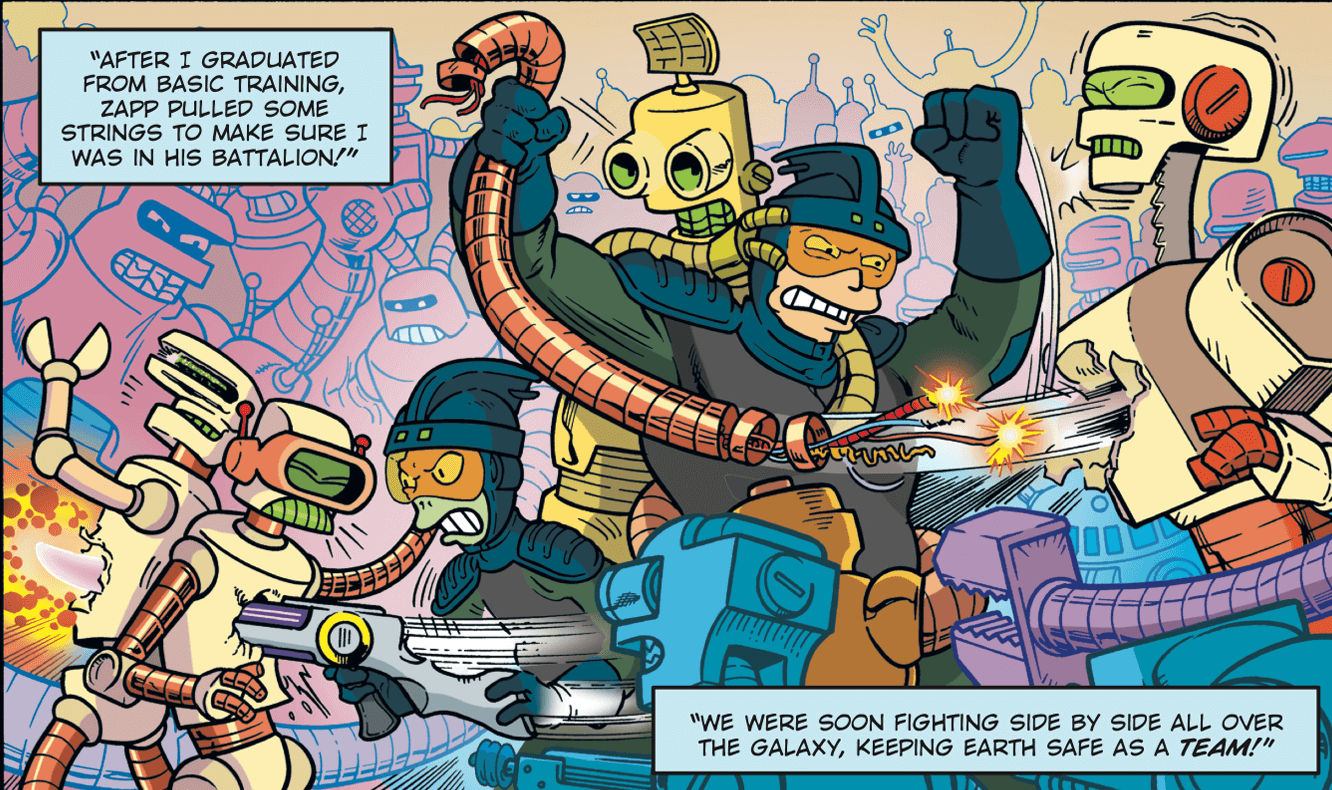 After learning of Brannigan's military prowess, Earth president Richard Nixon asked Mom to clone an army of Zapps to make the finest military in the world. When Mom chose Wernstrom over Professor Farsworth to head the cloning project, the jealous Professor sabotaged the cloning process. The sabotage caused Zapp's DNA to mutate, causing his clones to end up as horrific monstrosities and also affecting Zapp himself.

When Zapp started attacking other planets for no apparent reason, the DOOP used Zapp's clones to defend Earth, killing them all in the process. To hide all evidence of the cloning program, the DOOP then froze Zapp in carbonite and had Kif set him adrift in space. 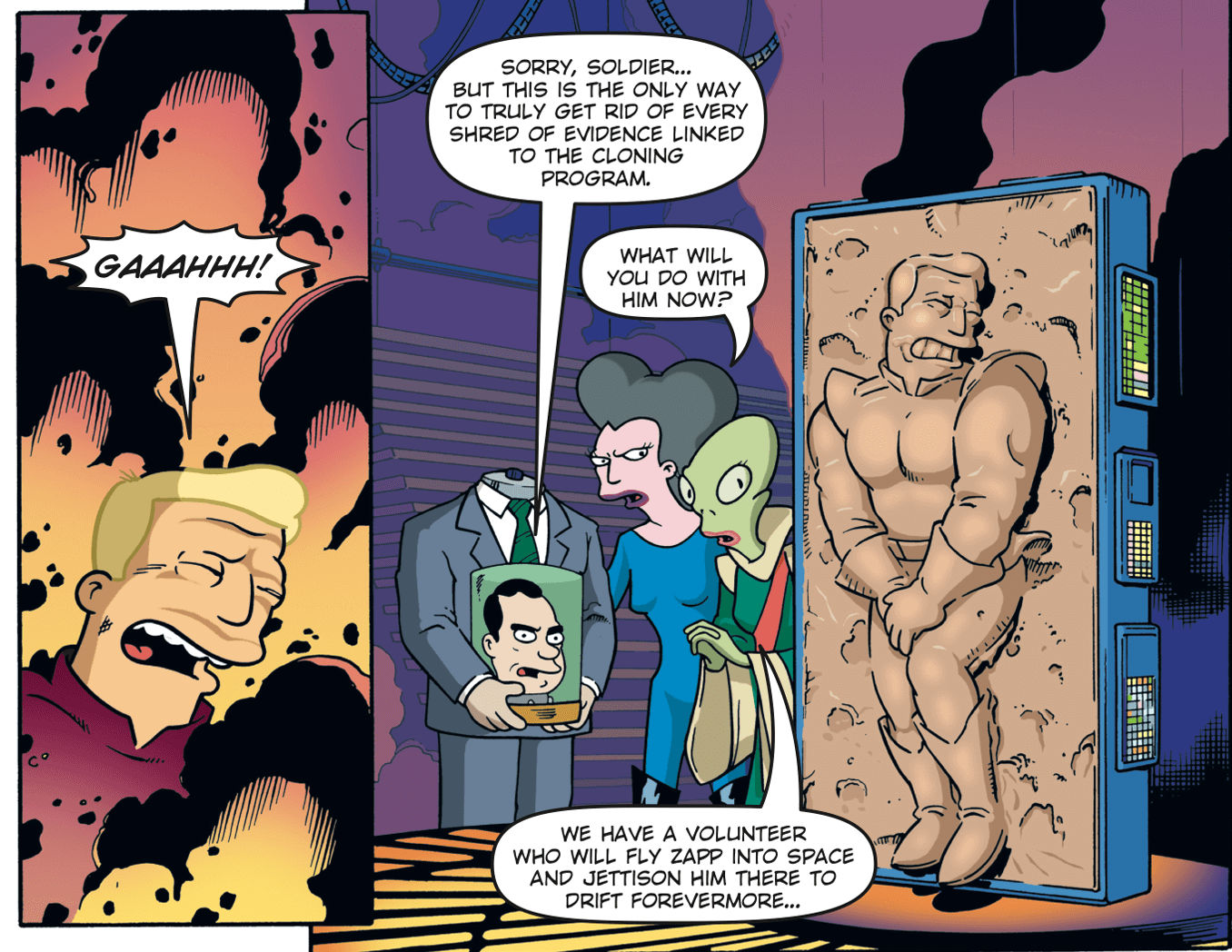 Months later, Zapp's frozen body was found by passing aliens, who defrosted him and brought him back to Kif. When Kif told Zapp the whole story, Zapp blackmailed Nixon into making Zapp captain for life of the DOOP fleet, with Kif as his first mate. 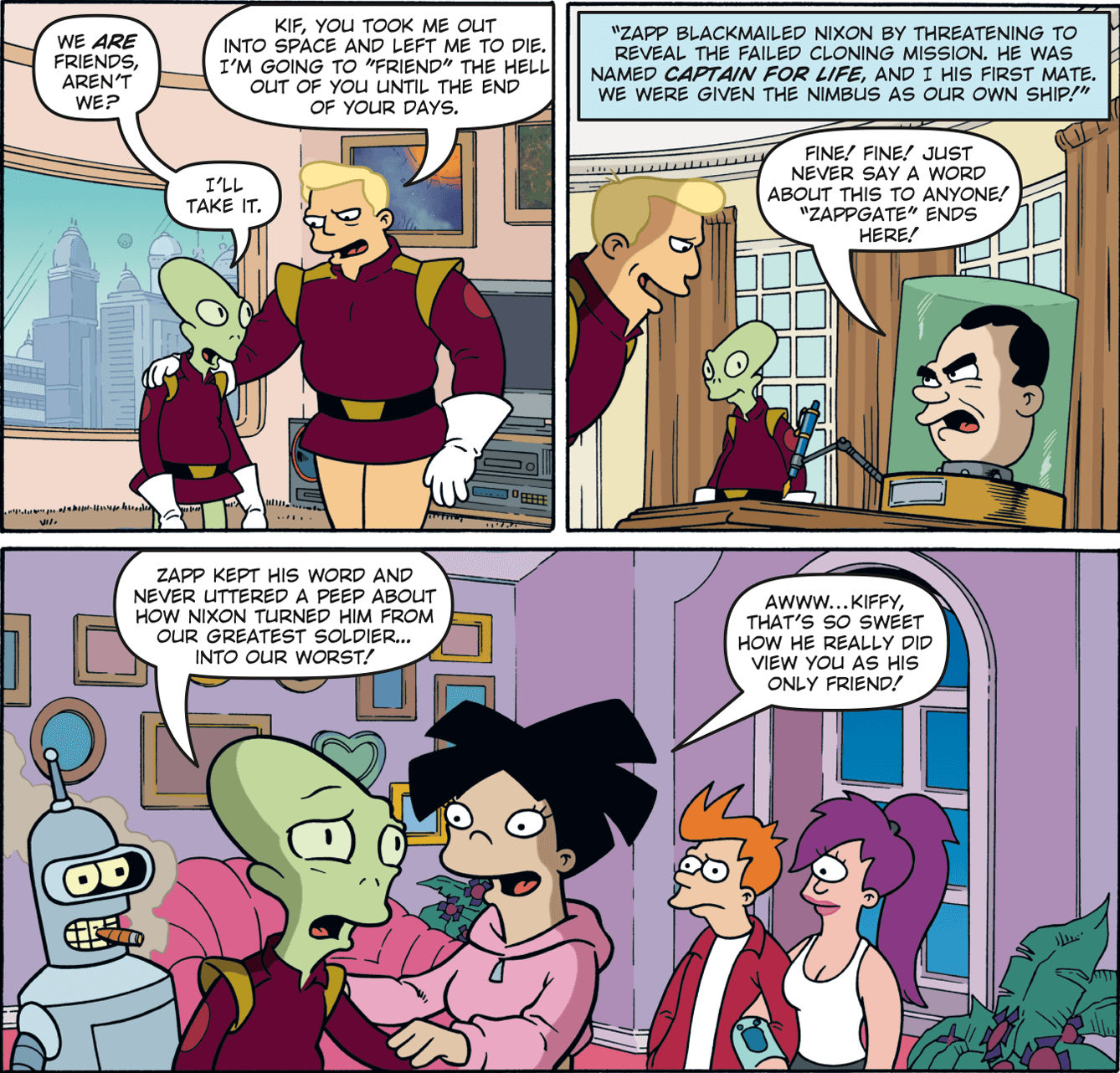 So, despite the humiliation and abuse, Kif has stuck with Zapp for the friendship they once had. 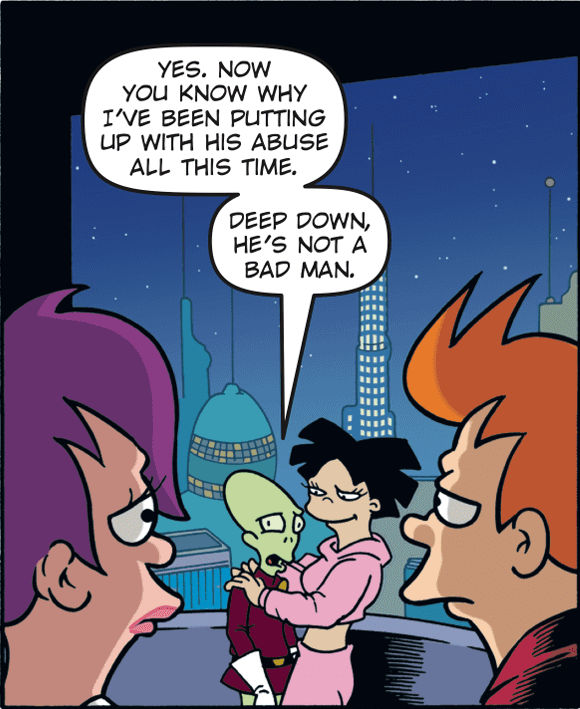 Note: This answer is entirely sources from the Futurama Comics series, which may or may not be considered canon. Also, Richard Nixon's presidency seems to be a continuity error, since the events of the comic occur years before his bid for presidency in the year 3000.

The most obvious answer is that Kif is stuck in an abusive relationship, in which Zapp holds all the power. He constantly denigrates and dismisses Kif as an individual and also takes advantage of his standing to throw Kif in front of the bus numerous times. Kif takes it because he doesn't know anything else, but I think deep down he also still feels flattered that Zapp relies on him, looks up to that "big, dumb, gross gorilla" and sort of buys into the mythology that surrounds Zapp Branigan as a famous space captain, even while knowing the truth is otherwise...

In addition to the answers above, they seem to be in some form of the military, most of the time. Kif likely has no choice in his duty assignment. Perhaps he did something very annoying to someone of very high rank, during his initial training, and they have assigned him permanently to Zapp as punishment.

Kiff was appointed to the position of Zapp's assistant by DOOP. By leaving that position, he quits DOOP(since the position has to be filled). Then he would become unemployed and he would need a new job. Since the show didn't show that he has any special qualities other than putting up the Zapp, Kiff would eventually need to go back to DOOP.

In another note, he probably cannot be reassigned because then Zapp would be shown in a bad light. Zapp is a hero to the people, Kiff's resignation or reassignment would shed some bad light on Zapp's career.

5
If Bender can survive as a ghost, why the concern for the lack of backup units?
3
How does human-robot sex work?
11
Why do Amy's parents dislike Kif?
12
How many battleships has Zapp Brannigan lost?
8
Why does Bender always say his name after he refers to himself?
16
What is the basis for Zapp Brannigan's uniform?
56
How was the cryogenization of Fry not discovered sooner?
7
When did Earth stop selecting jobs for its inhabitants?
28
Why does Kif appear at the end of “Where No Fan Has Gone Before”?