What was the length of the Time Tunnel in Irwin Allen's 60s Sci-Fi TV series?

In the 60s, when I was a kid, I remember watching the pilot episode of the TV series: The Time Tunnel. What really impressed me was the huge scale of the time tunnel in the subterranean complex; then, over the next months until its abrupt cancellation, I was a little disappointed with the show given that those initial shots did not recur again.

One thing that never made sense to me was that the depth of the tunnel in the regular episodes looked very short if compared with the long side view of the tunnel in the first episode. Obviously, given that I was just a kid, I had no idea that the real world repairs in expenses when it comes to fictional recreations, thus, I wonder if someone has grasp details about the concept sketches of the Tic-Toc project with the tunnel models, etc. in any media (Leinster's novel, Allen's script, comics, DVD, games) where the length of the tunnel is specified. 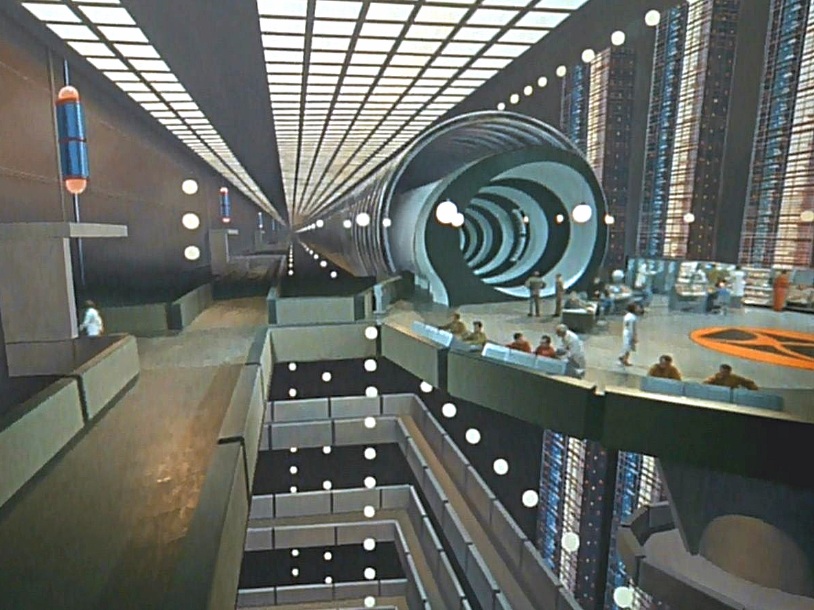 In the pilot episode, "Rendezvous with Yesterday", Senator Clark asks Dr. Douglas Phillips about the length of the Time Tunnel, and he also states then that it goes to infinity.

In season 1 episode 7, "Revenge of the Gods", one of the staff scientists (Dr Ann MacGregor, played by Lee Meriwether) mentions that the Tunnel actually extends to infinity.

Per the Irwin Allen Wikia:

This was the first episode of the series where the length of the Time Tunnel was mentioned. Even though it physically extends for a few dozen meters at the Project Tic-Toc base, once it is activated for time travel, its length is actually infinite.

After viewing the episode on YouTube, I can report that the following brief dialogue exchange occurs:

GENERAL HEYWOOD KIRK: Why? Because the instruments say so?

You're right about things being scaled down. Wikipedia gives information about the out-of-universe answer:

For the pilot episode, a large control room set was built, and a longer Time Tunnel was created using optical matte shots. After the pilot episode, location changes occurred for the production of the series; Colbert and Darren shot their scenes in another studio, on the 20th Century Fox backlot, or on location, while those who portrayed the Time Tunnel personnel filmed all their scenes on revised and smaller (due to the production having to use a smaller sound stage than used during the pilot filming) Time Tunnel control room set.

The impressive introduction to the scale of the project (over 36,000 people and huge underground buildings) is never seen after the first episode except for two clips (used over and over) of the giant power generator flashing, and Tunnel Security running across a walkway. Some of these shots were homages to the Krell complex from the classic 1956 MGM film Forbidden Planet, but new matte paintings and models were created specifically for The Time Tunnel pilot episode.

Not the answer you're looking for? Browse other questions tagged the-time-tunnel or ask your own question.