Trying to remember the title of a book probably from 90s or 2000s. English Paperback.

A Portal opens up in (Florida)? (Pretty sure it was Florida or another SE USA state)

Small dangerous alien creatures start coming through it and attacking people near it.

I 'think' it was just a spontaneity creation (i.e. Not cause by man) But it may have occurred as a result of some experiment that opened it.

Eventually police and SWAT come and start fighting the aliens and kill them all, But then Larger aliens come through and over run the police.

Eventually the National Guard sets up a perimeter, closes in and kill the new aliens. But then even LARGER ferocious aliens come through, and the US Army arrives with tanks, missiles, mortars, etc. and its a stalemate.

I Think the scientist by now have set up detection equipment that can see the radiation coming from or caused by the portal. And they report that they are detection more portals opening up elsewhere in the USA.

Except for the timing (2007), this could be John Ringo's Into the Looking Glass. 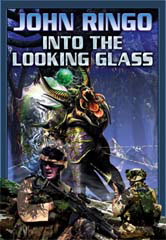 The novel begins with a large explosion at the University of Central Florida's science department, destroying the university and everything within a mile of it. Despite the indications of a nuclear weapon, from the devastation to the mushroom cloud, military personnel and emergency responders find no traces of radiation or EMP. Investigators find a mysterious sphere suspended in midair above a crater at what they determine to be the center of the blast. Unusual events build from there, culminating in an invasion of specially grown alien killing machines.

The President and his advisors rush to respond to the disaster. They contact Dr. William Weaver for his expertise and bring him to investigate the first anomaly. Weaver quickly explains that Ray Chen, a physicist at the university, was working on changing the laws of physics within a small space to allow him to create a Higgs Boson, essentially a particle containing its own universe. Whether or not he succeeded is unknown, however they have other problems as a new type of flat, traversable anomaly that comes to be called "Looking Glasses" begins to appear around the country, then around the world. While on the site, a little girl named Mimi comes walking out of rubble a few blocks from the explosion, carrying a giant spider on her shoulder. The investigators realize that something must have happened to her that allowed her to survive the explosion. They also discover that the spider on her shoulder is an incredibly intelligent being that seems to have formed a telepathic link with Mimi, as he is able to communicate thoughts to her without speaking.

Less than a day later, they discover that while the original 'Chen Anomaly' is traversable like the looking glasses and leads to an alien world, that gate isn't their only problem as a deadly new species begins to thunder through some of the various secondary gates, killing people and spreading a fungus-analogue organism that carpets the ground and buildings around it, devours every organic substance in its path, and proves resistant to most chemical and physical containment measures. Weaver and SEAL Command Master Chief Miller are among the response to a panicked call about 'demons'. A gate is discovered nearby. A team is sent through and triggers a fierce alien counterattack that the local human defenses barely manage to push back through the gate. Later, a second wave comes though this and other gates.

The Tor review goes more into length, and mentions both the portals emitting particles (Higgs bosons) and that the aliens are opposed by "the Army, National Guard, and every redneck with a gun handy."

Not the answer you're looking for? Browse other questions tagged story-identification novel alien-invasion or ask your own question.