When did the Thirteenth Doctor get her ear pierced?

Having watched the Season 11 opener The Woman Who Fell to Earth, the Thirteenth Doctor doesn't have an ear ring. In the subsequent episode The Ghost Monument, we see her running around with an ear ring (I can't tell if it's a clip-on or a piercing).

I didn't see this episode from the very beginning - did she suddenly get a pierced ear, or was this also picked up when choosing her new outfit at the end of the first episode?

Toward the end of the first episode of the new season, we see the Doctor travel to a charity shop to buy some clothes. She also seems to have had her ears pierced and her hair and makeup professionally done.

Noting that the real filming location of the shopping sequence is actually in Cardiff, not Sheffield, that same road contains at least two professional salons that offer nails, hairdressing and ear piercing. The closest is Beauty Nails, Cardiff. 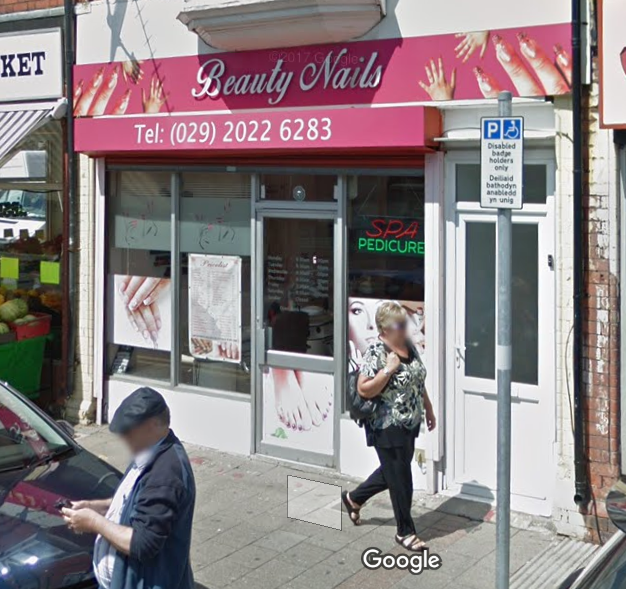 As to the (out-of-universe) meaning of the earrings, this was discussed in an interview with the BBC

Q1. What's the story behind the ear jewellery?

A: Jodie and I decided it would be great to have a single earring. I decided it should be bespoke and so needed a jeweller to help us design and make it. We met in his workroom and the three of us discussed what the earring should represent and we decided it needed to start at the top of Jodie’s ear and travel to the ear lobe. The story is that the stars are where the Doctor comes from, the chain is the journey and the hands of peace represent her love of humans. I wanted to make the hands two different colours to represent inclusivity so we decided they should be silver and gold. Jodie offered to pierce the top of her ear but we didn’t think that would be necessary and the jeweller did an amazing job of crafting a piece which clips over the top of her ear then the hands go through her pierced ear lobe and the chain is attached to the back butterfly. It took about 5 weeks from the first conversation to the end result and we were thrilled with it.