Has Star Trek ever had any battle droid-like entities?

While Star Trek has had android characters for some time (most notably Data and his Soong-type brethren), and we do see that such androids take part in combat from time to time, I realized that I can't recall ever seeing any purpose-built artificial combat creatures - that is, creatures that are made specifically to fight in a similar way that ordinary biological lifeforms do, whether hand-to-hand, with melee weapons, or with ranged weapons like phasers or disruptors.

I thought of the following, but they don't really match:

Did Star Trek ever portray an army of combat robots, androids, or droids in the manner of the Trade Federation droid army in Star Wars or similar?

The following do not count:

If a civilization deployed purpose-built mechanical creatures in a quasi-military or paramilitary context such as law enforcement, that can count.

If an android civilization, fighting for a political cause, survival, etc., built new androids specifically designed to fight for them, that can count. For example, if a coalition of Soong-type androids built a new, combat-optimized Soong-type prototype and started testing it out with an eye to mass-produce them and use them to hijack starships, that would count.

Offhand I can think of at least two examples, both of which killed their creators

The Doomsday Machine was a "miles long" planet destroying machine created by an unknown civilization.

SPOCK: She [the Constellation] was attacked by what appears to be essentially ... a robot, an automated weapon of immense size and power. Its apparent function is to smash planets to rubble and then digest the debris for fuel. It is, therefore, self-sustaining as long as there are planetary bodies for it to feed on.

They surmise that it was meant as a mutually assured destruction device that was meant to prevent war but eventually destroyed both sides of the conflict and has been traveling looking for more planets to destroy since.

Bones: It's a weapon built primarily as a bluff. It's never meant to be used. So strong, it could destroy both sides in a war. Something like the old H-Bomb was supposed to be. That's what I think this is -- a doomsday machine that somebody used in a war uncounted years ago. They don't exist anymore, but the machine is still destroying.

It's not an army but

If a civilization deployed purpose-built mechanical creatures in a quasi-military or paramilitary context such as law enforcement, that can count.

Aliens have them, but the Federation seems to have abandoned that technology. 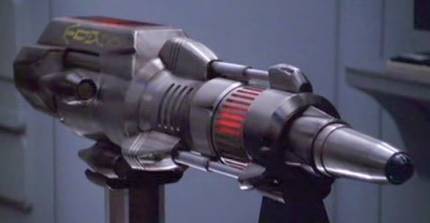 A Delta Quadrant species put antimatter warheads aboard self-aware missiles. As a conscious being intent on fulfilling its destructive mission at the cost of its own existence, each missile was comparable to a real-world suicide bomber. 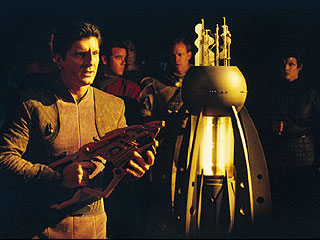 The Hirogen used Federation holodeck technology to populate a hunters' training facility with holographic prey. The prey, which by design emulated a number of dangerous intelligent species, were fully capable of violent resistance. The holograms rebelled and won their freedom. 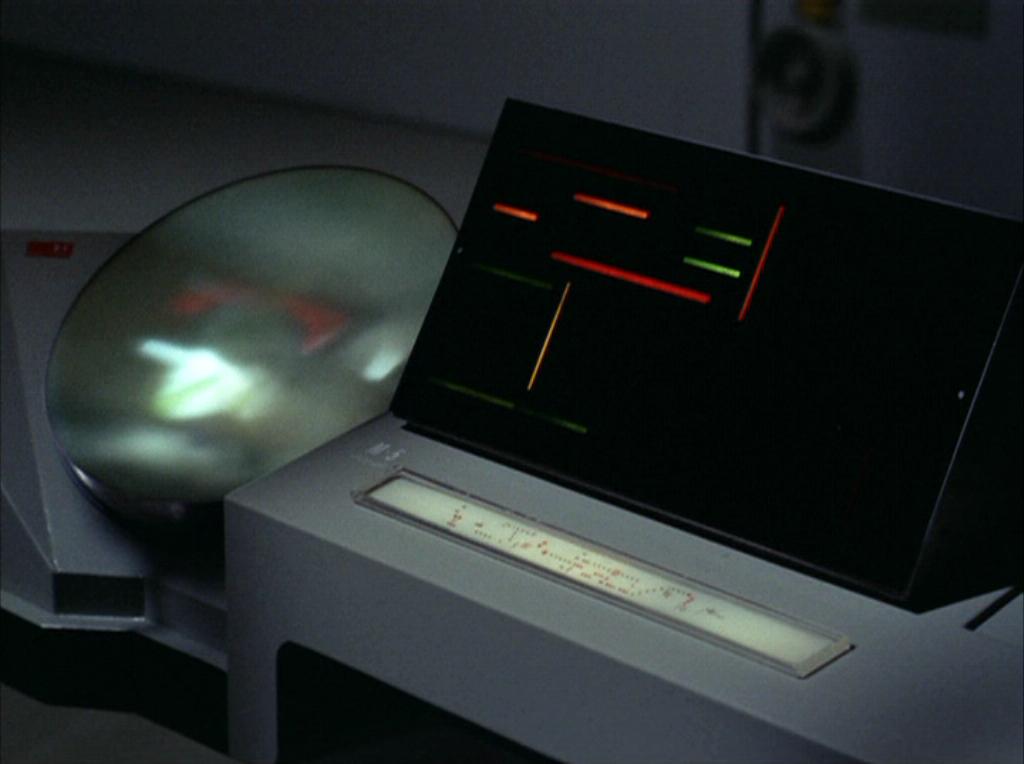 Starfleet experimented with thinking computers, placing Kirk's Enterprise under the complete, direct control of M-5 for a simulated battle against four other starships. M-5 treated the war game as a real threat, engaging with lethal force and killing everyone aboard one of the "enemy" vessels. In addition to catastrophically poor judgement, M-5 also displayed an inability to deal with feelings of guilt, choosing suicide once it had reconsidered its actions.

This TOS-era disaster, combined with Earth's conservative approach to innovation following early harmful failures(1), may have led the Federation to restrict the development of battle droid technology. 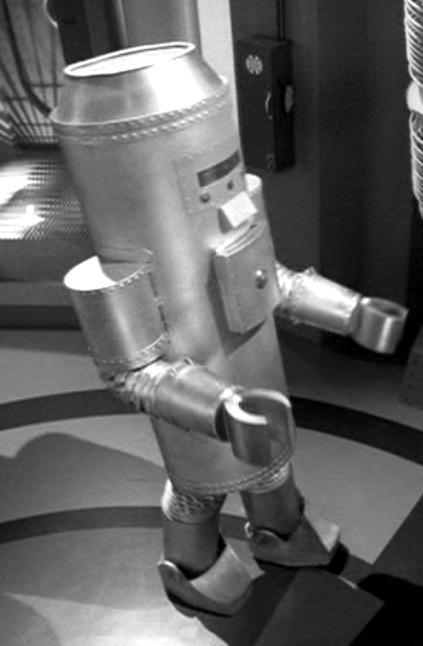 This is not a "real" in-universe example, but it may be circumstantial evidence.

Tom Paris wrote a retro sci-fi holonovel, The Adventures of Captain Proton, and filled it with tropes and over-the-top stereotypes of the genre. His depiction of the villain's clunky, stupid robot thug possibly suggests that 24th-Century humans do not have recent experience thinking of robots as a threat.

In this clip from "Night" (Voy 5x01), Satan's Robot demonstrates its role in Doctor Chaotica's security force, as well as its effectiveness against someone who won't play along with the Captain Proton storyline (Youtube: Paris & Seven vs Robot!, beginning at 0:21):

(1) Genetic innovation is still taboo during the DS9 era, centuries after the Eugenics Wars.

We rarely saw "robots" of any kind on Star Trek, at least while Roddenberry had any control. He didn't want to see any stories about mechanical monsters going all "Frankenstein", and he wanted characters with faces who the audience could relate to. The dispassionate Spock, far from unrelatable, served as a lens on the human condition, as did Data. Some mechanical battle bot or man/machine run amok could not have achieved this and would have dragged the show into cliched sci-fi stereotypes.

Battle bots appeared in Star Wars where epic battles were being fought. Epic conflicts of the kind we saw in the Star Wars movies weren't the kind of stories Roddenberry sought to tell. You can't tell big stories in a one hour time slot, and TV series never got and don't get the kind of budget to stage huge battle scenes in a pre-CGI world. The stories were always smaller and more intimate; a "soulless" battle bot would just not fit into that kind of storytelling.

After he passed away, the showrunners who carried on the Star Trek franchise seem not to have been bound by Roddenberry's views, which is why we saw a few examples of very nearly what Roddenberry wanted to avoid.

ST:Voyager episodes "Prototype" and "Warhead" introduced us to perhaps the closest thing in the Star Trek franchise to battle bots, and managed to do it on a personal scale, exploring the human condition and posing ethical dilemmas - very much what vintage Star Trek was all about in its earliest years.

ST:Deep Space Nine managed some epic storytelling with a somewhat serialized format and, thanks to CGI, managed to depict a big space battle or two, but not a battle bot to be seen in the most likely of contexts for one to appear.

In The Next Generation, the only devices which could be considered battle bots, at least in purpose, were the drones in "Arsenal of Freedom".

I've not mentioned the Borg because I assume "battle bot" to mean an artificial soldier set to war by its creator. Although the Borg were substantially artificial and were equipped with weapons, they were a race unto themselves, not an army at the disposal of some civilization somewhere.

I've also not mentioned the Jem'Hadar because they weren't robots; engineered beings, yes, but not mechanical - not androids.

When robots did show up in the original series, none were purposed as implements of war. The closest the show came to robot armies was: (1) "I, Mudd", where there was a planet populated by an "army" of benevolent servants, whose most violent impulses were limited to commandeering the Enterprise and keeping its crew confined, and (2) the presumed "army" of androids of whom only Ruk survived to be found by Roger Korby in "What are Little Girls Made of?". The Losira replicas of "That Which Survives" seemed to be a very limited production run (no more than a few), purposed to selectively defend the outpost, not wage a war.

There's the original series episode "That_Which_Survives" in which a species called the Kalandans created an artificial planet with automatic defense methods, one of which was the creation of droids in the image of a now deceased and last survivor Losira, who enabled the auto defense systems before she died, where a pre-programmed droid can kill a specific human with a touch.

Towards the end of the episode, the planet creates 3 of these droids, and I would assume it could have created more. (The planet also teleported the Enterprise 990 light years away).

In "I, Mudd," the crew of the Enterprise are held captive by a race of androids who have determined, based on the one example of Harcourt Fenton Mudd, that humans are far too corruptible to be left in charge of the galaxy. They set out to control humanity by serving them. Captain Kirk and company put on such a blinding display of illogic that they confuse the androids so badly that they lock up.

80
Why are there so few robots in Star Trek?

16
Has any Star Trek material had a serious in-universe discussion about the philosophy of transporter technology?
67
Has the phrase 'Star Trek' ever been used in Star Trek?
29
Has any Star Trek alien ever commented on humans' plain features?
5
Star Trek Original series # of encounters with entities having Q like characteristics
5
Which Sci-Fi work introduced the concept of an artificial, independent plurality?
11
Has there ever been a Star Wars / Star Trek crossover?
6
In Star Trek, has anyone ever weaponized a space-time anomaly?
7
Has there ever been any suggestion of any interaction or connection between the Q & the Traveler in Star Trek?
6
Is there a Star Trek episode that completely lacks futuristic technology or non-human traits?