One of the stories I am sure was called The Road and another was about a mysterious alien that a young girl named Ineed and her mother kept correcting it to Enid. I read it in the 70's or early 80's.

This book was an anthology book containing works by multiple authors, possibly a collection of short stories that had something to do with Isaac Asimov(?)

I recall the front cover displayed a man and some very odd looking plant-life (alien one presumes) against a pale blue background.

another was about a mysterious alien that a young girl named Ineed and her mother kept correcting it to Enid.

I have no idea about Asimov , but I hazard to guess that the story you are referencing above is "At the Bottom of the Garden" by David Campton. The story was first published in Armada Sci Fi 1 in 1975, and subsequently collected in several anthologies.

"At the Bottom of the Garden" was creepy as creepy gets. There is indeed a young girl, she indeed has a friend named Ineed who is... uh... not from around these parts, and her distracted mother indeed corrects her about many things including calling her friend "Enid". The story opens with the memorable line

"MUMMY, why has Ineed got furry teeth?"

The anthology SF1 (edited by Richard Davis) had pale blue cover depicting the protagonist from one story running towards the reader.

There was also a story about 4 sisters in a junior school who were essentially the same Being. The one in the lowest class wouldn't say "The Cat sat on the mat" because where she came from the cats were 10 feet tall.

There was one story about a cosmo-botanist on an unexplored supposedly desert planet who discovers a hitherto undetected lifeforms. 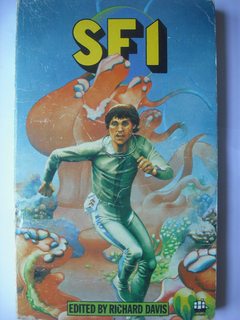 Not the answer you're looking for? Browse other questions tagged story-identification short-stories books or ask your own question.

3
Book about a human with black hair and a blue sword, and a blue/green striped alien
6
Short story - 20th century drug-addict recruited to fight in offworld gladiatorial games
10
Short Story about aliens who offer to save earth's animals by taking them to a sanctuary on another planet
14
Old (1950s? maybe 1960s) space adventure for boys anthology
38
Looking for an old time travel story which has a doctor pulling a gun on her new patient when he says something weird
16
Looking for an old story where humans conceal their newly-discovered psychic abilities from alien visitors
6
Looking for scifi story anthology, 1970s?
10
fantasy story collection from 1982 or earlier
6
Short story collection. Only remember part of two stories. One dealing with a war and one dealing with pollution