Why is the word “negro” so heavily used in the new Doctor Who episode “Rosa”?

Remember that it was only in 1955 that Rosa Parks famously refused to give up her seat and segregation was actually still legally enforced in Alabama at the time.

On Thursday, December 1, 1955, Rosa Parks, an African American seamstress, boarded a city bus in downtown Montgomery and sat one row behind the whites-only section. As the bus filled with passengers, the white driver ordered Parks to surrender her seat to a white man. Parks refused. Her defiance prompted the driver to summon the police, who promptly arrested her for violating the city's segregation ordinance.

The Encyclopedia of Alabama, Modern Civil Rights Movement in Alabama

In the mid 1950’s, segregation was widespread and legally enforced throughout the American south. Birmingham, Alabama was a hotspot of black activism in opposition to segregationist policies.

Further "negro" was used in the newspaper reports of Rosa refusing to give up her seat and so it seems rather accurate to me. 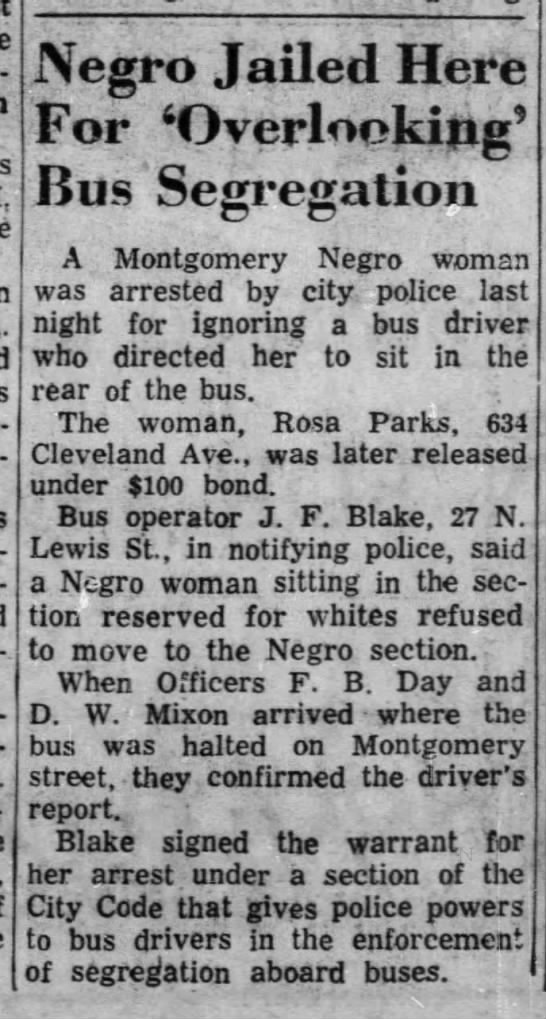 The episode is clearly set in this time period and location and so the words used are certainly because those sorts of words would have been used.

Montgomery, Alabama, 1955. The Doctor and her friends find themselves in the Deep South of America. As they encounter a seamstress by the name of Rosa Parks, they begin to wonder whether someone is attempting to change history.

The idea, apparently, is to make Doctor Who more educational for its younger audience, as was the plan when it launched back in 1963, and according to new reports in the Mirror the series may have as many as three episodes set in the past, with another three in the future and four on present-day planet Earth.

6
What was the Doctor's surprise (in the present) going to be?
16
What (if any) is the relationship between Gwyneth and Gwen Cooper?
14
Footage used in “The Magician's Apprentice” episode of Doctor Who
4
The Zygon Invasion/Inversion: is Truth or Consequences a real place?
62
When did pure-historical Doctor Who go out of fashion?
12
Why did the TARDIS take them to the Doctor's childhood and why didn't she want the Doctor to know where they were?
2
Why couldn't the Doctor save Adric?
10
Where Did Sonic Screwdriver Tech Come From?
1
Is there any information about why the nature of the villain was changed so much between the Doctor Who stories “Kinda” and “Snakedance”?