"The Shunned House" is one of my favorite stories by H. P. Lovecraft, although that is probably a minority opinion. One of the things that is notable about it is the detail with which he describes the eponymous haunted house, starting right near the beginning of the story. Despite Lovecraft's reputation, he did not usually lavish this much attention on the physical structures of buildings.

The house was—and for that matter still is—of a kind to attract the attention of the curious. Originally a farm or semi-farm building, it followed the average New England colonial lines of the middle eighteenth century—the prosperous peaked-roof sort, with two stories and dormerless attic, and with the Georgian doorway and interior panelling dictated by the progress of taste at that time. It faced south, with one gable end buried to the lower windows in the eastward rising hill, and the other exposed to the foundations toward the street. Its construction, over a century and a half ago, had followed the grading and straightening of the road in that especial vicinity; for Benefit Street—at first called Back Street—was laid out as a lane winding amongst the graveyards of the first settlers, and straightened only when the removal of the bodies to the North Burial Ground made it decently possible to cut through the old family plots.

At the start, the western wall had lain some twenty feet up a precipitous lawn from the roadway; but a widening of the street at about the time of the Revolution sheared off most of the intervening space, exposing the foundations so that a brick basement wall had to be made, giving the deep cellar a street frontage with door and two windows above ground, close to the new line of public travel. When the sidewalk was laid out a century ago the last of the intervening space was removed; and Poe in his walks must have seen only a sheer ascent of dull grey brick flush with the sidewalk and surmounted at a height of ten feet by the antique shingled bulk of the house proper.

The farm-like grounds extended back very deeply up the hill, almost to Wheaton Street. The space south of the house, abutting on Benefit Street, was of course greatly above the existing sidewalk level, forming a terrace bounded by a high bank wall of damp, mossy stone pierced by a steep flight of narrow steps which led inward between canyon-like surfaces to the upper region of mangy lawn, rheumy brick walls, and neglected gardens whose dismantled cement urns, rusted kettles fallen from tripods of knotty sticks, and similar paraphernalia set off the weather-beaten front door with its broken fanlight, rotting Ionic pilasters, and wormy triangular pediment.

But after all, the attic was not the most terrible part of the house. It was the dank, humid cellar which somehow exerted the strongest repulsion on us, even though it was wholly above ground on the street side, with only a thin door and window-pierced brick wall to separate it from the busy sidewalk. We scarcely knew whether to haunt it in spectral fascination, or to shun it for the sake of our souls and our sanity. For one thing, the bad odour of the house was strongest there; and for another thing, we did not like the white fungous growths which occasionally sprang up in rainy summer weather from the hard earth floor. Those fungi, grotesquely like the vegetation in the yard outside, were truly horrible in their outlines; detestable parodies of toadstools and Indian pipes, whose like we had never seen in any other situation. They rotted quickly, and at one stage became slightly phosphorescent; so that nocturnal passers-by sometimes spoke of witch-fires glowing behind the broken panes of the foetor-spreading windows.

Unlike so many of Lovecraft's stories, which were set in his fictional witchery-infested cities and towns—Arkham, Innsmouth, Dunwich—"The Shunned House" takes place in Lovecraft's real hometown of Providence, Rhode Island. He also mentions that Edgar Allan Poe must have walked many times past the frontage. The connection to Poe was possible because Poe really did live for a time in Providence, while he was courting Sarah Helen Whitman, whose house can still be visited. Given the detail with which he places the location of the house, it seems likely that the actual spot—and whatever structure(s) stood there in the early twentieth century—ought to be identifiable.

So, was there an old house answering to Lovecraft's description at the location in question, and did its appearance thus inspire him to write the story? And, if the house was standing in Lovecraft's time, what has since become of the site?

Yes, it was based on the Stephen Harris House, 135 Benefit Street, Providence. Here's a picture by Flickr user Andrew Kuchling: 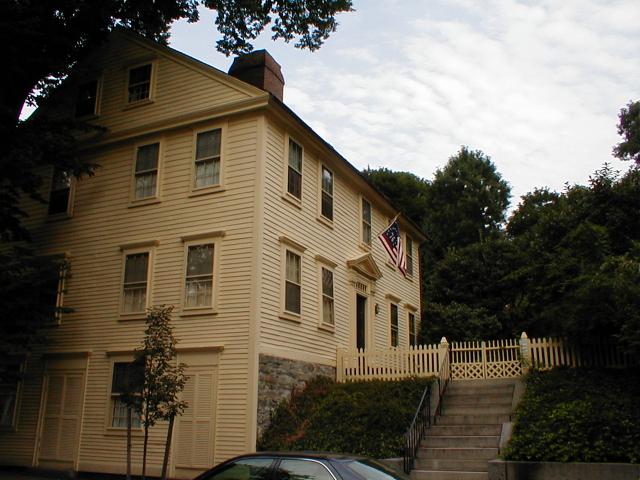 And here's Lovecraft on his letter to Lillian Clark, 4 November 1924 (from Letters from New York 82):

And on the corner of Bridge St. & Elizabeth Ave. is a terrible old house—a hellish place where night-black deeds must have been done in the early seventeen-hundreds—with a blackish unpainted surface, unnaturally steep roof, & an outside flight of steps leading to the second story, suffocatingly embowered in a tangle of ivy so dense that one cannot but imagine it accursed or corpse-fed. It reminded me of the Babbitt house [=the Stephen Harris House] in Benefit St., which as you recall made me write those lines entitled “The House” in 1920. Later its image came up again with renewed vividness, finally causing me to write a new horror story with its scene in Providence & with the Babbit house as its basis. It is called “The Shunned House”, & I finished it last Sunday night.

The 1763 house has been restored and is still inhabited; quahog.org has details.

I found out this via the wonderfully informative Facts in the Case of Alan Moore’s Providence blog [spoiler alert], without which 95% of the references in Moore’s Providence would have flown right over my head. I recommend both the comic and the blog for Lovecraft fans.

8
Has anyone finished Lovecraft's Azathoth?
5
Can't recall a particular event in Lovecraft's Reanimator novel
18
Was Half Life 1 inspired by HP Lovecraft's "Fungi from Yuggoth"?
5
Was Arkham Asylum inspired by Lovecraft's favourite town?
14
Real world location for the Dursleys' house?
12
Does the Miskatonic River match a real place?
65
What are some examples of Lovecraft's racism in his published short stories?
2
Was the directory in the Bradbury Building the real one in Demon with a Glass Hand?