Anyone know of this book, I thought it was called The Last Simolean but it's like unexisted now?

There's like an Amazon lady that bonks her head and like ends up a troll after being haunted by a talking sun, and a troll queen who uses her father's corpse.

This is a long shot, but I wonder if this is The Amazons of Somelon by Raymond Kaminski. 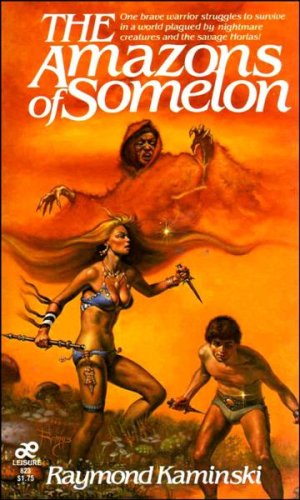 This kind of matches your description, but only if you've misremembered some elements of the book. The Amazon lady is Sheryl and the queen is Allukah, though Allukah is not a troll - she is the queen of a barbarian horde called the Horlas.

The Amazon Sheryl does indeed get a bash on the head. She is knocked unconscious when barbarians called Horlas attack the caravan she is guarding. But I can't find any reference to a talking Sun and Sheryl doesn't turn into a troll.

The chap who is castrated is Kio though he isn't exactly castrated just, erm, left rather mauled by Allukah's attentions:

As Kio shuffled along, the aching orbs between his legs slapped from one thigh to the next, swinging like pendulums. The entire foreskin was gone from his penis, shredded by Allukah's coarse hair, coarsened by her two sets of chapped lips, and gnawed by her crooked teeth.

The part with the dead father's corpse is when Kio finds the mummy of Allukah's father, though the penis isn't used for any rituals:

Kio found her father's body in a small room lined with stalls and white porcelain bowls, exactly where Allukah had hidden it. Lugging the stiff corpse ripe with embalming fluid all the way out to the light, he scooped a hole in a soft heap of rubble with his bare hands and placed the dead man inside. Kio was particularly careful to bring the mummy's severed penis along too. He knew what it felt like to be half a man, even if he didn't know what it felt like to be dead.

41
Book from the 70s: Battle/Balance between Light/Sun and Moon/Dark?
15
I'm looking for a sci fi book with a tribal woman, hermaphrodites, and implanting minds into new bodies
8
YA book about a human girl who saves an cat-like elf guy, deals with racism and magic and a prophecy
5
Book about a girl with magic and a boy a with curse
11
Fantasy book with young female protagonist, magic, matter manipulation, tasteless chocolate sandwiches and room with aquarium walls
5
Fantasy book, group of women meets group of (mercenaries?) men, has a shipwreck scene
5
Book about a demon and spooky stuff investigator with a musical instrument
3
Female protagonist is a mage, has a prophecy about her and dies, but is brought back by her soulmate