Book about the reincarnated spirit of a daughter of Apollo

The book entailed the reincarnated spirit of a daughter of Apollo. The story line involves the 1st party telling from a teenage girl who was the daughter of a screenwriter and had a step-mother. The girl (the reincarnated daughter of Apollo), her family and her best friend all travel to Mykonos, Greece on a trip where the two younger girls remember their past lives and their former rivalry. The book I think came out in the early 1990's I believe.

This is The Immortal by Christopher Pike. 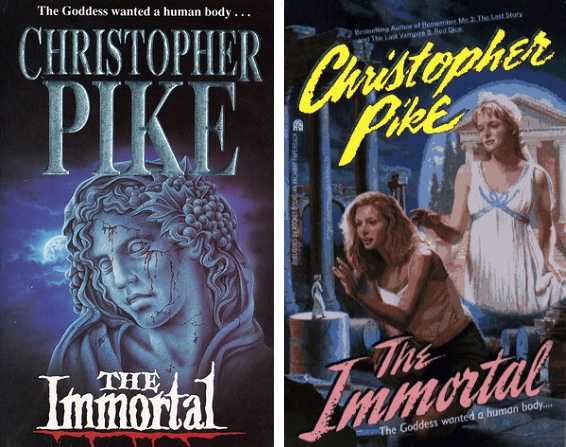 It was published in 1993 so it fits your time frame. The protagonist is Josie Goodwin and she goes on holiday to Mykonos with her friend Helen Demeten. Josie's father is a screenwriter, and he and Josie's birth mother divorced when Josie was ten. Josie's father has his new girlfriend along though they aren't married yet. The girlfriend's name is Sylvia though she likes to be called Silk.

The action kicks off when Josie finds a statue of Sryope, the daughter of Apollo, and takes it home with her. I'm afraid I forget the details and I'm not sure if Josie is actually the reincarnation of Sryope or whether Sryope possesses her. Anyhow, Josie and Helen's relationship recapitulates the struggle between Sryope and Pythia.

8
Book about a boy and future earth?
8
Dystopian YA book featuring female protagonist who reviews/endorses children's toys
7
Book about teens with powers
6
Seeking a picture book of short stories from the 1980s
16
Paradise planet of reincarnation results in global mass suicide
3
Book where the main character falls from a tower in a field of wheat but is unharmed due to her being unconscious
4
Book about a pair of girls who help a ghostly girl in a locked room move on
6
Book - A girl who gets possessed by a doll of a dead spirit in a coastal village?
10
1990s or early 2000s dystopian young adult novel, main character is teenage girl with a number as her last name