I have been looking for a movie that I've seen as a child. That must've been around 20 years ago now. I think it must have been from 80s or 90s - but not earlier than '84 I think. I would characterize it as horror SF. I am 99% sure it was english language and most probably US-made.

From what I remember the best, the cover featured the main couple of heroes on the front and in the back there was a smaller image of a bipedal, large walker-robot - it stuck in my mind, because the 8 or 9 year old me chose this VHS at a local rental just because of this walker-robot. I haven't finished the movie because it turned out it was a tad too violent for me back then.

So the story itself as I remember it, is taking place either on a different planet or on some sort of post-apocalypse Earth. The cast is just a small group of people, I remember pretty well a typical handsome guy as the lead, a lady with curly hair of the era, a chubby rando who's one of the first to die, and a wise-ass cynic who turns out to be a killer-cyborg.

How the story actually feels, brings to mind Total Recall (with it's setting), The Terminator (with the killer-cyborg posing as a human thanks to a living flesh cover) and The Thing (with the paranoia that anyone can be not who he seems to be, and also the fact that the location is desolate, the group is small and deprived of any form of outside communications - due to bad weather conditions or sheer distance, I think).

There is even a scene, when everybody left alive are testing each other, by cutting skin of the tips of their fingers to check if it bleeds normally. The cyborg guy actually says something like "I'll do it", he takes the scalpel, he then cuts his finger carefully and shows the others the blood saying something like "Is it red enough?"

Later when some people got separated from one another, he kills the chubby rando violently, e.g. ripping his arms off with his bare hands. This is the moment I started watching through my fingers.
The rest I almost can't recall, but I know the killer cyborg ends being stomped on by the large bipedal walker robot.

Here is a pic of the video cover which matches your description. It features the two protagonists in the foreground with a 'walker' robot in the background. 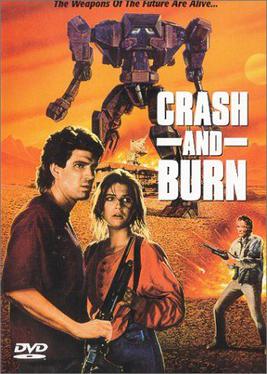 Here is the trailer from YouTube. It features the Terminator style cyborg and the walker robot.

11
I'm looking for the title of a sci fi film about a killer robot
6
HBO horror movie with a super-strong killer
7
Storyline involving killer robots that harvest legs
6
Anime of 80-90's name. Robot fight
4
Anime with a ship in a sky and people with abilities/powers fighting
9
Post-apocalypse animated movie involving cyborg and enhanced humans
13
Movie with cyberpunk-like villain set in jungle