In his "Tower of Babylon" story, Ted Chiang describes his square tower having two "intertwined" and recessed ramps, one going up, the other going down. He said that:

The upward and downward ramps wound around each other without touching, but they were joined by the corridors through the tower's body.

Can anyone explain how this is possible? The ramps are intertwined, but don't touch? If they are intertwined, don't they have to touch at the points where they intersect in a figure-8 pattern? If they are only joined by corridors linking them across the tower, then how are they intertwined? Granted, I'm a mathematically-challenged liberal-arts guy, but this doesn't seem possible. Is the tower's geometry somehow bent into a strange shape, like the fabric of the universe in the story (per the ending)? That doesn't seem to hold water, because the characters seem to view the world beneath the vault of heaven with the same geometrical perspectives and rules that we do. What, again, am I missing! Ack.

As Adamant says in the comments the ramps are indeed arranged like the helices of DNA with the base pairs as corridors. The mistake you are making is assuming that that the two strands touch, a common misconception generated by looking at a simple line drawing. If you take a look at a better, more 3d rendering like the one on this page https://geneed.nlm.nih.gov/topic_subtopic.php?tid=15&sid=16 for example you will see the two intertwined strands dont touch except where they are joined by the cross bars.

Around it wound a gently inclined ramp, cut into the side, that banded the tower like the leather strip wrapped around the handle of a whip. No; upon looking again, Hillalum saw that there were two ramps, and they were intertwined.
...
The upward and downward ramps wound around each other without touching, but they were joined by the corridors through the tower's body.

The implication is that the staircases form a double helix, the structure of DNA, and the 'corridors' between the two entwined staircases are analogous to the base pairs connecting the strands. Like the DNA Tower in Australia, but with the support discs between the towers replaced by 'corridors': 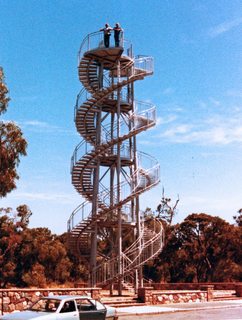 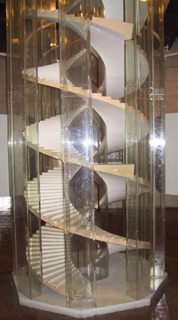 Not the answer you're looking for? Browse other questions tagged ted-chiang or ask your own question.