Fantasy book where two magicians travel to many worlds while being chased?

I remember reading this book some years ago, probably like ten or twelve.

In it, two magicians: I think it was a mind magician and maybe a necromancer, are on the run from some big bad (probably a monster of some sort), and they travel to and from many different worlds, while trying to get away. In the end, I think they decide to face off with said monster and defeats it.

Which book is this?

This sounds like Agents of Artifice: A Planeswalker Novel (based on Magic: the Gathering) 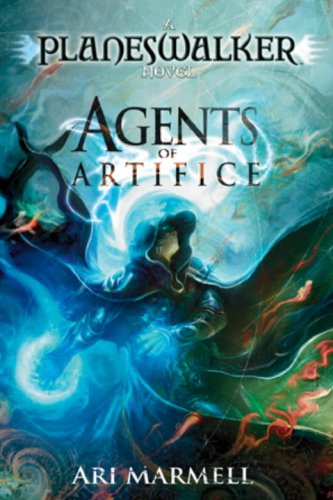 Most of the points match up pretty closely to your description:

two magicians: I think it was a mind magician and maybe a necromancer, are on the run from some big bad

The book focuses on the character Jace Beleren, a "mind mage," whose love interest in the book is a necromancer named Liliana Vess. During the course of the book, Jace is first involved in, then crosses, a group run by another mage (Tezzeret), and spend time on the run and in hiding from him.

and they travel to and from many different worlds, while trying to get away.

All three characters I named above are "Planeswalkers," who are able to travel between worlds.

In the end, I think they decide to face off with said monster and defeats it.

At the end, Jace finally faces off with Tezzeret and is able to defeat him.

At one point, Tezzeret takes Jace to a deal with another character, Nicol Bolas, a large dragon (who is also a planeswalker); the deal falls apart and ends with Jace and Tezzeret being forced to flee to save their lives.

I read it at least ten years ago, but I may have been published a lot earlier

The paperback is listed as published in 2009 on Amazon, which is close enough to your timeline.

Mind-swapping or body-swapping may have been part of the book.

Body/mind-swapping is a major plot point in this story; Jace has a close friend (Kallist) who is not a planeswalker, and when he and Liliana decide to flee their current plane, he conceives an idea to carry Kallist's mind in his own in order to save him, too. This naturally goes terribly wrong and results in the aforementioned body/mind-swap.

The different worlds were called planes, and those able to travel between them were called something along those lines as well.

Magic: the Gathering uses "Planes" and "Planeswalkers" extensively in their lore.

This is also a common element in the Magic stories, based around the mechanic of the actual card game (where players themselves are the ones summoning the creatures).

In fact, the only point where it doesn't match is:

It was not part of a series.

While I've included the current book cover as shown by Amazon, the earlier printing I own has a considerably smaller and more subtle "A Planeswalker Novel" heading, making it very easy to miss that it's part of a series.