Guy tries to enter village, loses his lover, finds a shipwreck, gets into prison, finally flies away

I’m trying to identify this movie for 15 years. I saw it on television in the nineties. None of the below mentioned details are sure, any of them can be a false memory.

The movie has some Scandinavian flavour and takes place in an overall gloomy, misty, muddy, dirty and barren land, looking something like Northern Europe in winter. The era is sometime around the 16-18. century.

The first part of the movie revolves around a middle aged man, who has beard and/or moustache and wears a big black hat, and has a raven. Or doesn’t have a raven but himself is called Raven because of his big black hat? He is, or said to be some kind of a wizard, but shows little sign of it. He desperately tries to get into or to get something from a walled village. The village is a very rundown, muddy place and it has a big, round pool in the middle, its edge slightly raised from the ground, with a low wooden or mud wall on its perimeter, full of disgusting waste to its brim. The man with the hat could not enter the village.

A bit later the man is already old and maybe blind, and has a young companion. They young guy maybe gets captured by the villagers and gets tied at the side of the waste pool. He makes a trick, making the big ugly boss of the village believe that there is something valuable in the waste pool, and manages to drown the boss.

After that, the young guy has a lover, and they are expecting a baby (or not). They somehow get separated. The guy tries to find the woman, who meanwhile gets married to a high ranking man, some kind of governor, or military person, maybe for the benefit of her newborn baby (or not).

The guy reaches the sea, and finds a big old wreck of a sailing ship on the beach. For some reason he decides to repair it, unsuccessfully. Guy gets locked up in prison somehow. The woman visits the prison with her child, probably because she finds out that the guy is there. In the final moments of the movie, the guy climbs the high stone walls of the prison, higher and higher, and finally disappears or flies away, or something like that. The end.

The first half of your description sounds very much like the 1985 film Ladyhawke, about a cursed man who is a wolf by night and his girlfriend who is a hawk by day.

some Scandinavian flavour and takes place in an overall gloomy, misty, muddy, dirty and barren land, looking something like Northern Europe in winter. The era is sometime around the 16-18. century. 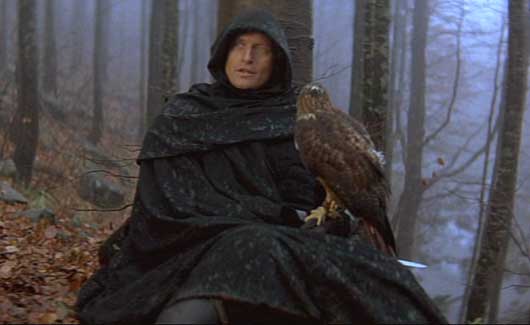 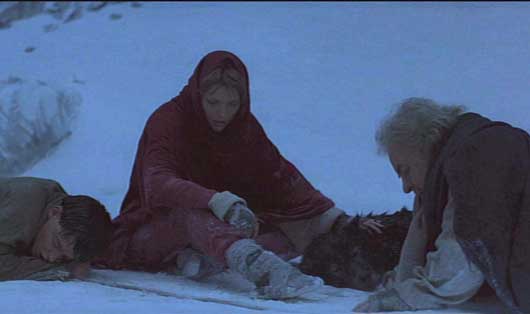 The first part of the movie revolves around a middle aged man, who has beard and/or moustache and wears a big black hat, and has a raven.

Hawk.
No beard, but he does have a black hood. And the film features plenty of bearded men, notably Cezar the wolf hunter, so maybe you are mixing up people.

He desperately tries to get into or to get something from a walled village.

Yes, In the words of IMDB, "Because Phillipe escaped from Aquila, Navarre wants the thief to help him enter Aquila so he can kill the Bishop." because "The jealous Bishop cursed the lovers with black magic, making Navarre a wolf by night and Isabeau a hawk by day. In their human forms they do not remember anything about their activities as animals and can never touch each other as humans and are so forbidden to be together."

The village is a very rundown, muddy place

They young guy maybe gets captured by the villagers

Yes, that too. But that's about it, the rest of your story doesn't match. Could you have been watching two films in succession?

5
Anime movie about a boy in a ghost town
4
Movie about a haunted house involves killing in dreams / Swimming pool
12
Looking for a film where two lovers are told to wait 10 years for each other to see if they really love one another
7
Movie identification: a girl who grows up very fast
11
Guy eats something and a creature comes out of his belly and flies away
15
Movie where lightning brings people back to life as "blue people"
4
Manga where the main character dies and gets reincarnated as his younger self and tries to save his village from the demon army or king
7
Sci-fi movie where a guy loses a girl, tries to hijack a train, finds the girl but she leaves him