TV episode with characters similar to the Smash Martians [duplicate]

I am trying to identify a TV show I watched as a child in the UK. It is rather obscure.

The show aired on the ITV network in the late 1970's, I would guess between 1978 to 1973 and definitely shown on a week day afternoon as I recall watching it after school.

It may have been a one off TV special or a very short run of episodes and I only caught the final one because I clearly remember tuning in the follow week and being disappointed it was not being broadcast.

Regarding the show itself, it was a mix of puppets and live action. If memory serves (but it is rather blurry) the main characters were a group of robots or aliens reminiscent of and puppeteered in the same manner as the Smash Martians. For those who don't know, Smash was a brand of instant mashed potatoes and was advertised by puppets meant to be martians. Here is a link to one advert on YouTube. I can be sure it was not simply an advert I watched as it was around 25 minutes long. A fairly standard length for a UK children's TV show.

Plot... I cannot recall many details sadly except that one scene involved the hero group of puppets being caught and imprisoned and another with a character who I think was simply a metallic ball with black eyes glued on teleporting into various places in search of something. At one point it surprises a woman in the bath who throws soap suds at it and screams.

It is possible I am conflating one or two different shows, the Children's Film Foundation film "The Glitterball" may account for some scenes but not all.

Could this have been Button Moon? Note in particular the character of Mr Spoon, the left most figure in the following picture: 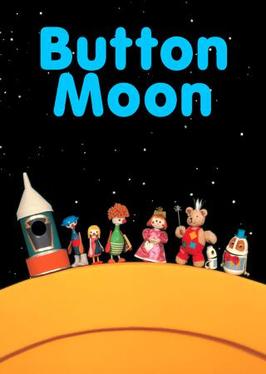 Compared to a Smash Martian: 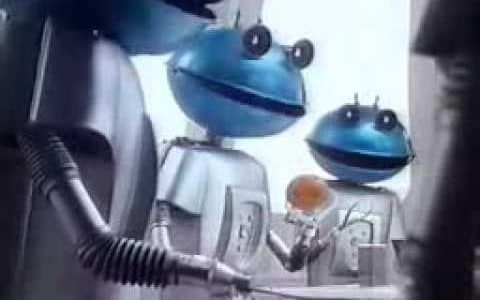 From the wikpedia article:

Button Moon is a British children's television programme broadcast in the United Kingdom in the 1980s on the ITV network. Thames Television produced each episode, which lasted ten minutes and featured the adventures of Mr. Spoon who, in each episode, travels to Button Moon in his homemade rocket ship. All the characters are based on kitchen utensils, as well as many of the props.

Once on Button Moon, which hangs in "blanket sky", they have an adventure, and look through Mr. Spoon's telescope at someone else such as the Hare and the Tortoise, before heading back to their home on 'Junk Planet'. Episodes also include Mr. Spoon's wife Mrs. Spoon, their daughter, Tina Tea-Spoon and her friend Eggbert. The series ended in 1988 after 91 episodes.

Not the answer you're looking for? Browse other questions tagged story-identification tv robots or ask your own question.

4
Goofy looking alien robots lose a "Kleptonite Ball" towed behind their spacecraft
6
Children's science fiction book series and tv show
4
What UK 80s TV kids show had a ghost in a hat and coat looking for treasure?
10
90s/early 2000s animated Superman TV show episode in which Superman goes rogue under the influence of a sea star-like creature
4
British TV series with robot dog and post-apocalypse
7
British kids's movie or TV show, teleporting into Tower of London
19
TV series involving some kind of global phenomenon affecting people, in which there are also mass deaths of birds
13
British Kids TV show involving collecting pieces of a MacGuffin over a series
9
Episode titles of "Luna"