I read the book trilogy in paperback and perhaps they only were available in “bulk” paperback. They were from the 60's or 70's. I remember one book cover - an older man dressed as a typical wizard - long brown robe with hood, long grey hair and beard wearing a sword and holding a long cane or stick is sitting at some fellows kitchen table.

The wizard is from a different world and comes to ours. He returns to his bringing along a young man and woman. It’s the young man who owns the small house and kitchen table the wizard is sitting at - big shock to the young man when he turns on the light and sees this wizard character sitting there. At his home world the people are under attack by something like giant bats that sort of fly and float about. If they catch you they take away your ability to think. Eventually you’ll walk off a cliff or drown or starve since you aren’t human any longer.

So the people are fleeing to these giant, “keeps” their ancestors made long ago when these creatures first attacked humanity. Oh yes, the creatures/bats live in massive numbers deep underground and of course the wizard and our young man get to climb down a bazillion stairs into their nest for some important reason.

This is The Time of the Dark by Barbara Hambly. 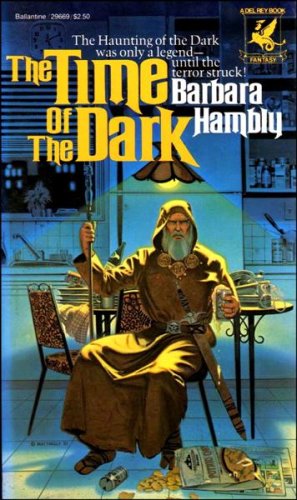 The protagonist is a lady, Gil Patterson, not a man but apart from that the book matches your description, and you remembered the cover artwork perfectly.

The scene where Gil meets the wizard is:

Wrapping it about her, she padded silently into the dark kitchen, her feet finding their way easily. Her hand found the light switch by touch in the darkness and flicked it up.

The wizard Ingold was sitting at the kitchen table.

She knows who the wizard is because she has already met him in a dream. The giant bats are described by Ingold as:

"What can I say of the Dark, Gil? What can I say that you don't know already? That they are the sharks of night? That they pull the flesh from the bones, or the blood from the flesh, or the soul and spirit from the living body and let it stumble mindlessly to an eventual death from starvation? That they ride the air in darkness, hunt in darkness, and that fire or light or even a good bright moon will keep them away? Would that tell you what they are?"

The nests of The Dark are indeed called Nests in the story and are reached down long stairs:

"I—I dreamed of them." Gil stumbled on the words, finding it unexpectedly more difficult to speak of that first forerunning dream to one who understood than to one who did not "Before I ever saw them, before I ever knew what they were. I dreamed about a—a vault, a cellar—with arches going in all directions. The floor was black and smooth, like glass; and in the middle of that black floor was a slab of granite that was new and rough, because nobody ever walked on it. You said they came from—from beneath the ground."

"Indeed," the wizard said, looking at her with an alert, speculative curiosity. "You seem to have sensed their coming far ahead of its time. That may mean something, though at the moment I'm not sure . .. Yes, that was the Dark, or, rather, the blocked-up entrance to one of their Nests. Under that granite slab—and I know the one you're talking about—is a stairway, a stairway going downward incalculable depths into the earth. It was with the stairways, I believe, that it all began.

The Time of the Dark is the first book in the Darwath trilogy. The other two books are The Walls of Air and The Armies of Daylight.

7
Trilogy where people went to another world via portals and had gems embedded in them
8
What book has a man in a world on the brink of an ice age with a wizard mentor?

6
Book about a would-be toy designer being stalked by his creations
7
Identifying a film that involved a giant man-bat with lower human limbs
6
90s sci-fi novel with two worlds, one grim another pastoral with the war-cry "Ire, Iron and 'voorstrod'"
6
A fantasy adventure book based on Old Greek Myths and Medusa
5
Science fiction trilogy: endless corridors, humor, speeding vehicles, assertive woman
8
Movie where a woman escapes from a dream pod into a red-sand filled world
30
Novel involving a sentient AI, alien hogs, and a Chinese colony governed by OCD
11
Science Fiction book about large space... creatures