Where did the idea of using bottle caps as money come from?

Being a fan of both the DuckTales and the Fallout series, I have only recently noticed that in the former there was an episode The Land of Trala La where the main characters introduce a concept of money (in the form of bottle caps) to an isolated society.

It is well known that in all of the Fallout franchise, bottle caps are the most popular type of currency in the post-apocalyptic world.

Given that the episode was released about 8 years before the first Fallout game, is there any indication that it was inspired by DuckTales? If not, what was the inspiration for this concept in the Fallout series?

The DuckTales episode is based on a classic Scrooge McDuck story by Carl Barks from 1953, entitled "Tralla La". This is a very well known story for older readers and much more likely to be the inspiration for Fallout than the DuckTales episode. You would have to ask the developers of the game to know if that was the actual inspiration. 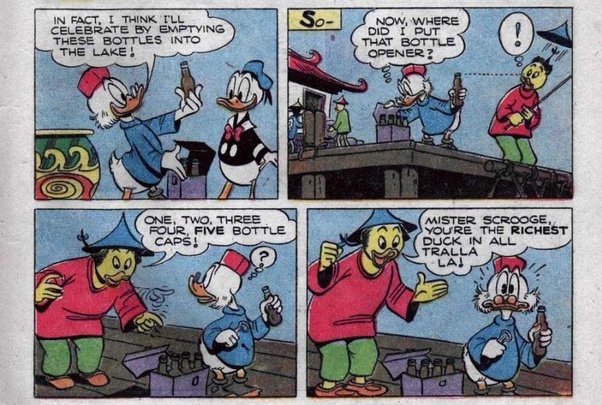 The idea of using an item as currency that in most cultures is considered of little or no value is not unique to DuckTales, as seen by this TV Tropes page: Weird Currency.

In fact, "weird currency" isn't even unique to fictional media. There have been a variety of things used as currency throughout history, from shells to rocks.

Bottle caps have even been essentially used as currency in Cameroon. This had nothing to do with the DuckTales cartoon nor Fallout, and everything to do with the fact that drink manufacturers were having a "promotion war" where prizes were available on the underside of every bottle cap.

Furthermore, Fallout is a property known for its critical satire on things like capitalism and consumer culture. Therefore, I wouldn't be surprised if the idea was just another satirical jab towards the fact that so much of people's lives are centered around something so quintessentially consumerist as soda, that even their economy depends on it. Perhaps the particular image of the bottle cap was inspired by DuckTales, but I was unable to find any commentary on this.

Hypothesis: Bottle-caps-as-money is a modern example of Shell Money. And the 1953 cartoon, which Klaus Æ. Mogensen posted as his answer, has the Chinese angler (see: hat, hair queue) representing the historic Chinese use of cowry shells as currency:

In China, cowries were so important that many characters relating to money or trade contain the character for cowry: 貝. Starting over three thousand years ago, cowry shells, or copies of the shells, were used as Chinese currency. The Classical Chinese character for "money/currency", 貝, originated as a pictograph of a cowrie shell.

(As such, it's a mildly racist cartoon - America, founded by men who understood that the financial underpinnings of society would make or break it - sneers at people who use shells as currency or, say, accept glass beads as payment for land.)

Bottle caps make a very straightforward modern re-interpretation of shell money because they're correctly shaped and sized, and have the same implication of "trash that you can just pick up, made valuable by treating it as money."

Not the answer you're looking for? Browse other questions tagged inspiration money fallout ducktales or ask your own question.

11
Why was Deadpool dishonorably discharged?
5
Why is the distance that shots fired by the (Presger) Garseddai gun can penetrate through an object 1.11 metres?

4
Did Richard A. Knaak get the idea for Warcraft from J. R. R. Tolkien?
22
How much did Larry Niven's Ringworld inspire the Halo game franchise?
9
Where do the children in Little Lamplight come from?
12
When did the writers of Star Trek decide the Federation doesn't use money?
6
What do we know about Huey, Dewey and Louie's parents?
4
Where does this rhyme about Quatermass come from?
9
Where did the Prime Directive come from?
6
Was the Flame and the Void inspired by military techniques used in the Vietnam War?