From where do the original Symbiotes from Klyntar get their names?

There are several Symbiotes in the Marvel universe (or multi-verse if you'd prefer) including Venom, Carnage, Toxin, Anti-Venom, Scream, Riot and many many others.

The Symbiotes that were genetically created by the Life Foundation (i.e. Scream, Riot, Phage, Agony and Lasher) were given code-names (by the scientists I'd presume). As mentioned here,

The Life Foundation was at one point researching a way to create "super-cops" to police their new Utopia. Towards that end, they probed the Venom symbiote and extracted the last five of its "seeds" -- the basis for later spawn as the symbiotes reproduce asexually. These were cultured and bonded to five of the Life Foundation's best security personnel to form the Guardians. The individuals eventually became known by the code-names Scream, Riot, Phage, Agony and Lasher. Either due to the extraction process, the effect of the Earth environment on the spawn, or both, these symbiotes proved to be even more mutated than Carnage.

But from where did the original Symbiotes from Klyntar get their names (e.g., Venom and Carnage)?

There's no clear source for most symbiote names. Some have been named by themselves and/or their host; others have taken on names provided by others.

From this, it seem most likely that the symbiote accepts a name suggested by the host, although it may have influence over the decision. Certainly, once a name has been selected, they don't seem to want to change it. Venom has had several hosts but has kept the same name; Toxin at least two, but has kept its same name (of course, the second host gave it its name).

Sleeper did have three hosts; the first two short-term, and the third in no position to choose anything beyond the first few minutes. He could have pulled that name out of any of the three, however. It's also possible that Eddie had the idea for the name, but didn't really push it as he knew he'd take back the Venom symbiote as soon as it could be rescued; Eddie was the only one the symbiote had been bonded to at the point the name appeared in the "Previously" description in the comic.

(Of course, we have to keep in mind that these are all offshoots of extremely damaged Klyntar (with the possible exception of Sleeper; Venom has been through a healing ceremony, though his time with Lee Price may have caused new damage). Klyntar brought up on their homeworld, under normal circumstances, may be given names the equivalent of Caitlin and Bryce by their parent.)

TL;DR: Symbiotes' names when they're just black Klyntar goo are unclear. As for when they're bonded, it's unclear whether their names are "inherent" or resulting from the symbiosis - save for Venom, which was a deliberate choice.

In the early appearances of the Venom Symbiote, it wasn't referred to with a name ("the alien costume", "the Symbiote", etc). This might be a matter of the writers not having a definite idea, or just a storytelling perspective, but later on when the Symbiote lore grew more consistent, the Symbiotes were still not referred to with names of their own.

For instance, when Knull, the "God-Host", addresses Eddie's Symbiote in Venom #4 (2018), he always calls him "my child". While it could be argued that it's only him being condescending, he does address Eddie both as "host" and by his civilian name.

Furthermore, Symbiotes operate in a hive mind. Without dwelling into the various "hive mind" definitions, most of the time it strips its members of individuality. If all your thoughts are connected/shared, does one need a name?

Although it might be possible they do have names, just not "as other civilizations would understand it", as it's the case with their culture (Venom #3, 2017). Such names could be understood by hosts, though (see Toxin example below).

In Venom's big reveal in The Amazing Spider-Man #300 (1988), Eddie gave a little backstory of what he became after Spider-Man proved a big article of his wrong, which led to to Eddie being fired. As one still needs to pay the rent, Eddie wrote for cheap newspapers, with lurid "I was abducted by aliens" articles and the like. For a journalist at heart, that counts as spewing out venom, hence the name. 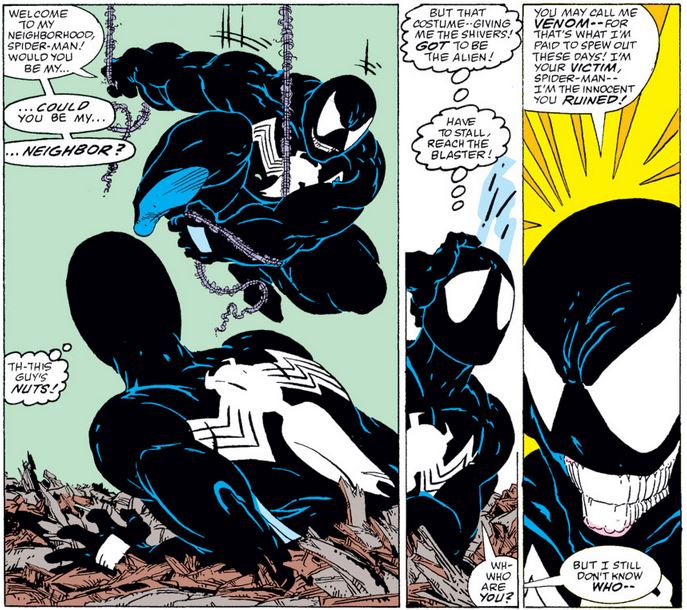 In-universe, Pat Mulligan (human part of Toxin Symbiote) refers to Carnage as a Symbiote entering Cletus Kasady. This might imply that Carnage's name was already is own, but as he says the same of Venom, it's possible he's just mistaken and thinks that the Symbiotes' names are their own - Venom's wasn't, as explained above. Panel is from Toxin #1 (2005). 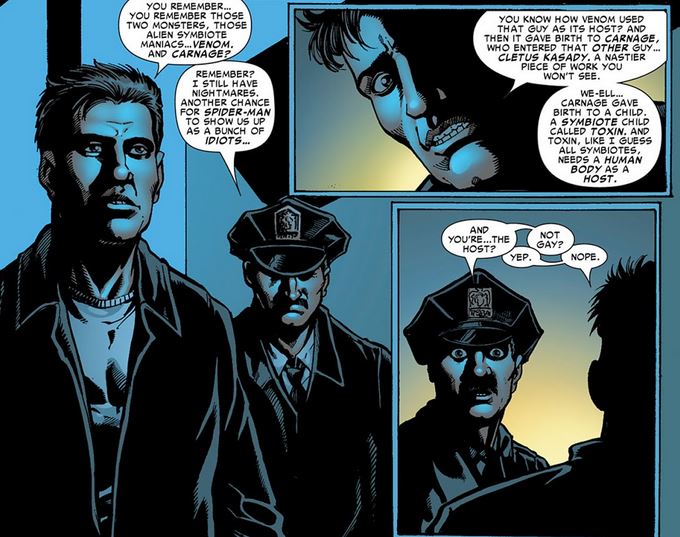 Out-of-universe, Carnage's name was a bit of a debate, as revealed in an interview given by Danny Fingeroth (former Marvel Comics editor) to Syfy. Some names which would fit a psycho killer like Carnage were already taken, such as Chaso and Ravage. The writers settled on Carnage.

Prior to settling on the name Carnage, Fingeroth said, the creators at Marvel cycled through several other names, including Chaos and Ravage, which were in use elsewhere in the Marvel universe.

This one is self-explanatory. Eddie "purged" the Venom Symbiote out of his body, but some remnants still stayed, and when he underwent a shady cancer cure, those were turned into all-healing powers cells. Especially, they meant to cure the "poison, the disease" Venom was, as shown in The Amazing Spider-Man #569 (2008). What a better name than Anti-Venom?

Toxin was given his lovely name by his grandfather, Venom, in Venom vs. Carnage #2 (2004). How Venom came up with Toxin instead, of, say, Little Bobby Tables, seem pretty obvious.

Not the answer you're looking for? Browse other questions tagged marvel comics venom or ask your own question.

8
Where does magic come from in the Marvel universe?
5
Are female super heroes often referred to by their common names?
16
Where do Green Arrow and Hawkeye get their arrows?
14
Where do the X-Men get all their money/funding?
3
Where does Beast bring 5 original X-Men from past to present?
8
Where does Captain America get his bulk from?
26
Where did Magneto get his helmet from?
8
Do the Marvel symbiotes canonically drain the life force from the user?
9
Where did the inquisitors get their lightsabers?
5
How did they capture all of the Symbiotes in the Venom movie?