Can Mastadge herds be found in the Pegasus Galaxy?

In the pilot for "Stargate: Atlantis", the Wraith Queen's dinner table has what appears to be the head of a Mastadge for a centerpiece. The creature appeared in the 1994 movie "Stargate" (it was the large beast that took a liking to Daniel), but didn't otherwise appear in the series. However, the creature was seen on Abydos, which is located in the Milky Way galaxy... a galaxy that the Wraith have no knowledge of at this point. 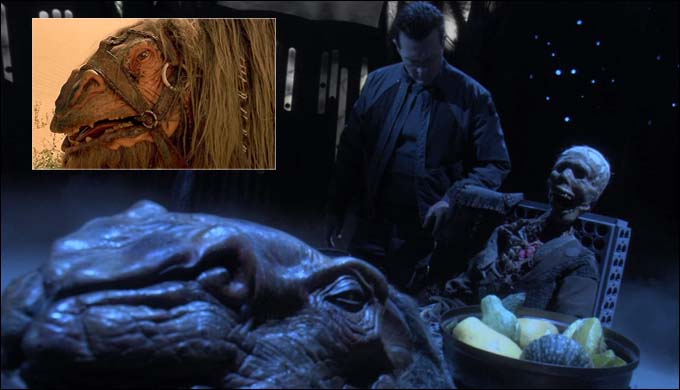 This is probably just a tip of the hat to the film that started it all, but it also makes me wonder what the Wraith Queen is doing with an animal that's indigenous to a world they can't reach.

Is the Mastadge head merely a nod to the original movie, or can this animal also be found in the Pegasus galaxy?

Browse other questions tagged stargate stargate-atlantis or ask your own question.

44
Why does everyone on almost every planet in the Pegasus Galaxy speak English?
13
How Do Stargates in the Milky Way Galaxy, the Pegasus Galaxy, and on the Destiny Differ?
6
What are the abilities of the Pegasus Galaxy's species, the Wraith?
14
What Was the Rationale of the Ancients for Eliminating Manual Dialing of Pegasus Stargates?
12
When did it become common knowledge that the Atlantis Expedition were from another galaxy?
7
Where does a jumper-activated Pegasus Stargate get its power?
6
Are the Stargate glyphs different between Pegasus and Milky Way galaxies and how does it affect the DHD on puddle jumpers?
16
Why didn't the Ori invade Pegasus as well as the Milky Way?
10
Is there any in universe reason or rational for why the Wraith ignore Atlantis for the 10,000 years after the Ancients abandoned the Pegasus Galaxy?