I caught the tail end of a strange horror or sci-fi movie and the credits were cut short because of commercials so I never found out the title.

The overall look and feel was campy and of the late 80s to early 90s. The lead female character appeared to be Madonna or someone else with a similar look (ie dark red lipstick, white face cream or powder and blonde hair).

The ending scene that I saw was likely the climax of the movie with the villains being a vampire-like character (similar looking to Al Lewis from the Munsters) and apparently the vampire's (or whatever) daughter. The scene took place in a brightly lit factory of sorts in which old steam press machines were running. The heroes of the movie were gathered in a group adjacent to one of these machines. For some reason unknown to me, the vampire-like villain sat on a wide belt at the front of the machine. He moved mechanically in sync with the machine, though his daughter was distressed by this. The good guys were mostly passive.

Not long after this the vampire character became caught in the machine and began struggling to get free. He was still moving in a stiff, mechanical fashion but was also showing signs of distress. After a short period he was pulled into the machine which was blowing steam as it cycled. A close shot of the machinery showed blood oozing out of its rollers and gears. The vampire's daughter was overwhelmed by the events as the heroes watched with their mouths agape. A large blast of steam was released from the machine likely indicating the death or dissolution of the vampire character and the machine ceased operating.

This was the climax of the scene and the indication that the villain was vanquished. It wasn't clear what became of the vampire's daughter though she may have vanished with her father. Upbeat 80s/90s music began playing and the movie ended.

I haven’t seen it, and it’s not an exact match, but could you be thinking of The Mangler, based on a story by Stephen King?

It features Robert Englund looking a little like Al Lewis from the Munsters and features a possessed industrial laundry press which kills Englund’s character. 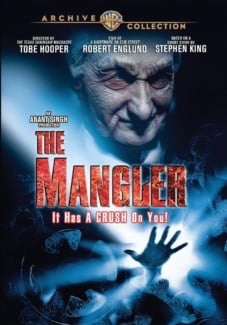 4
80s era Sci-Fi/Horror film featuring several unrelated stories (not Creepshow)
7
1980s/90s animated sci-fi movie where people trapped in an egg escape by dropping a bullet which grows spikes
13
Scifi movie from 70s, 80s or 90s – A scientist measuring intelligence
11
80s/90s Sci-Fi TV/movie where a man gains the ability to have his wishes granted whilst in a record store
15
'70s era movie about pandemic and extermination system
20
80s SF/F movie with exotic cult, soldier of fortune
15
Looking for a horror movie about a serial killer with an African mask