Book with lasers on pyramids for electricity generation, sun flare ending the civilization, genetic engineering of pets and rebirth of civilization

An ancient civilization uses lasers mounted on pyramids to generate electricity. When a sun flare causes an uncontrollable cascade which ends their civilization, some escape to space. One group, which includes a woman with a genetically engineered cat, depart in a fleet of crafts capable of nearing the speed of light. Another group, which include a man with an engineered dog, remains behind.

The man's group works to repair the damage caused by the cascade and then aides in the evolution of mankind. They even cause the flood to reduce atmospheric radiation. Later, the ships that left start to return to find the Earth renewed but occupied by a new human civilization on the brink of repeating the whole thing.

I've never read it, but having seen one of these answers previously, it reminded me of Siva! by by Leigh & Walt Richmond. Previous title was The Lost Millenium. 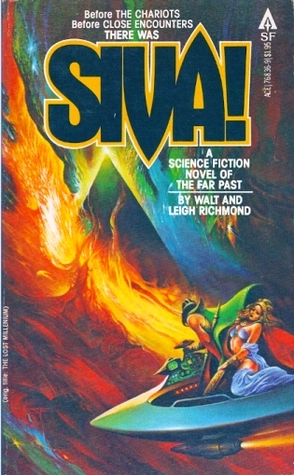 The Piri Reis maps: ancient cartographs that show Earth as seen from polar orbit - they have recently been confirmed by satellite photography.

Myriad proofs that Earth has changed its axial tilt during near-historical times: perhaps as recently as 1450 B.C.

In 1962 Walt Richmond developed the theory of the "solar tap": a source of electrical power so great that one installation could provide the world's power. In 1963 his research papers were labeled "Top Secret." The Richmonds refused to work under conditions of secrecy, but Walt worked out on his own the ideal structure for a solar tap.

The Result: an exact replica of the Great Pyramid.

The kind of power postulated by the Richmonds' findings makes all the anomalies of history fall into place. This book was written as science fiction. Whether the story approaches the actual beginning of our civilization is something for each reader to decide for himself...

There is a discussion/critique of the ideas and the book under it's original title, The Lost Millenium here.

It has been suggested as an answers for questions here and here.

There is a book search on Goodreads that is listed as solved with this as the answer. The original description is below.

The premise of the book is that when the earth was all one continent, there was a very technologically advanced civilization that was sending out spacefaring colony ships but had a massive power surge that broke apart pangea. They built all of their structures from stone because metal buildings disrupted their power supply. The spacefarers came back to earth from time to time and tried to re-civilize the survivors which is why there are stone pyramids all around the world (egypt, cambodia, latin america, etc). Also, some people survived the cataclysm on a submarine called an ARK.

Not the answer you're looking for? Browse other questions tagged story-identification books genetic-engineering or ask your own question.

19
Seva, the fictional Greek Goddess of Destruction, in a pre-1955 book
4
I'm looking for a Fiction book about pyramids

8
Looking for a time travel book where future generation travels and conquers the past
12
Looking for a book with two main characters and dragons in the plot
33
What is the title of this book, whose title had something to do with measurement and a number, and civilization is in a geometric shape?
3
Book about boy with the genetic ability to see present and past timelines of living things as color
8
Looking for the title of a book about alien invasion, mining asteroids and using lasers to defend earth
2
Looking for a specific novel/series about (supernaturally) "Gifted" children (possibly children "of the Sun"?) with an older sister, twins and a baby?
4
Book with a school for teenage vampires who can't go out during the day or they'll burn; and heroine falls in love with the teacher
13
Looking for title/author of fantasy book where the Sun is hidden by pollution and it is always winter