Did we ever see Droid Maintenance?

Apparently, according to the Galaxy class deck blueprints, as shown on Memory Alpha, Deck 36 houses a "Droid Maintenance" room. A series of convention notes from Rick Sternbach's panel at AnimeCon '91 also mentions it:

Going into the bowels of the ship, you will eventually find a door marked DROID MAINTENANCE...

What exactly goes on in Droid Maintenance, and has it ever appeared on-screen or in written materials?

The only "droid" we regularly see is Data.

Ideally I'd like the purpose explained both in and out of universe, or at least an in universe mention. Even just the door tag appearing briefly would count. I would accept any published sources, including novels or comics if no canon references exist. Out of universe, my guess is it was just a comical reference to Star Wars. (the production crew filled the ship with various references) Some kind of statement confirming that would be nice.

The Constitution class Enterprise NCC-1701 did have DOT-7 droids which deployed through portholes in the hull to conduct underway hull maintenance. These have been mentioned in several comic books however we did not see them on screen until Star Trek: Discovery Such Sweet Sorrow. 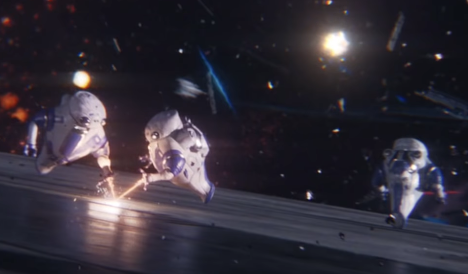 NCC-1701-D was a self-cleaning ship which likely used robots but they were never seen. According to First Officer Riker:

BRENNA: Men! Always talking when there's work to be done. And shouldn't you be flying this ship, or whatever it is you do?

RIKER: Sir, I think I'll stay and give her some help.

(Picard and Worf leave. Riker goes to where Brenna is using hay to clean up what animals leave lying around naturally)

RIKER: That isn't necessary. The ship will clean itself.

BRENNA: Well, good for the bloody ship. (long pause as she appraises him) Tell me, Commander Riker, where does a girl go to wash her feet on this ship?

Droids have rarely been featured on screen, and like most custodial workers they simply conduct their maintenance after the work day is done so they don’t disrupt the crew.