There's a movie, that I watched in the mid 90's, with a scene where a killer robot wears the face of the friend of the main character.

The scene I remember is on a planet e.g. the moon, and that the main character is in a white dome like structure hiding from the robots. The robot walks by with the friend's face on and peers through the little window on the door of the dome. The robot was a metal structure with long metal legs and only the face was human.

I thought it was Screamers, with Peter Weller, but I've just watched the whole thing and it did not happen.

Per FuzzyBoots' comment in your original query, that scene is indeed from MoonTrap (1989).

Warning: NSFW for gore and hilarity 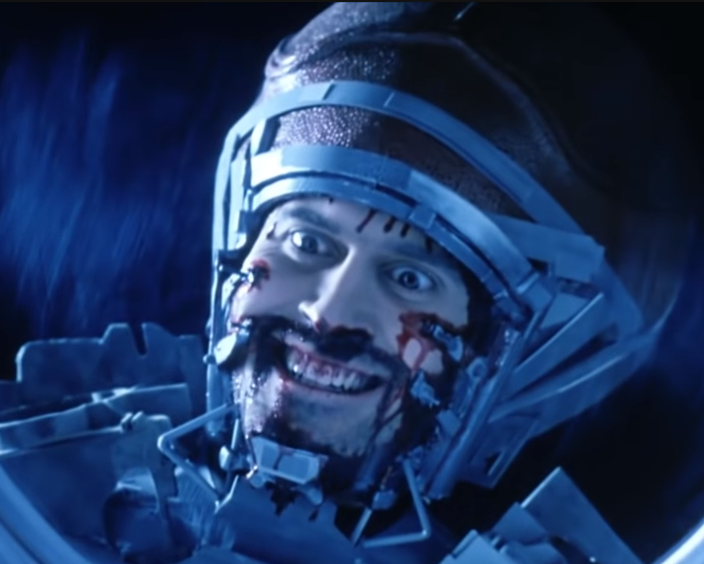 Not the answer you're looking for? Browse other questions tagged story-identification movie robots or ask your own question.

12
Cartoon movie where the main character had a robotic arm
7
Storyline involving killer robots that harvest legs
13
Looking for TV Series or Movie about AI taking over the earth, probably aired in the 90's
6
Anime of 80-90's name. Robot fight
8
What is this 50's or 60's "alien invasion" movie
13
2 War machines survive the destruction of humanity, try to build a robot to repair themselves
4
Mid-90s mecha action anime with wearable sentient robot suits
12
Looking for the name of an anime where the robot head is also an airplane
10
Animated featurette about a boy who befriends old junky, clumsy robot in a Jetsons-like future setting