What's the name of that comic team with genetically engineered government agents?

The story starts with a family living in a cabin in the woods. There's a mom, a dad, and a boy, but the boy is about twenty years old or something. They're talking, I think the boy is bringing up an old argument about going out and trying to find other people, but his parents don't want him to.

Right in the middle of the conversation, for no reason at all, the kid gets up and goes to a cabinet and swallows a pill. It's an iodine pill. The parents wonder why he swallows the pill, and the kid dosen't know why. It's about then that we learn that the kid has the ability to predict the future in some fashion, acting to do things in preparation for a tragedy that hasn't happened yet, but will, in the next few minutes. Apparently he did this to save his mom's life once when he was very young. Since the pill was supposed to mitigate the problems of radiation, the parents thing they're about to be hit with a radiation weapon, leaping into action like professional preppers.

In the next few pages the parents are taken out by a swat team in suits with sci fi weapons and super powers. I'm not sure if the parents die, but they're out of the picture now. During the confrontation the parents nearly kill their kid, I think, to keep him out of the government's hands. It's then we learn that he isn't even their kid. The parent's are terrorists, and they kidnapped him because he was superpowered and raised him as their own to be an anti-government weapon, all unknowingly. They had a bunker full of weapons and a big bomb and everything. And they trained the kid well too, since he was able to take out several of the attacking soldiers with karate and precognition, but as if it were a normal education. Shaken with the shattering of his entire worldview he goes with the agents to their base.

On the way out, we learn that the terrorist parents fed the kid a whole slew of lies and terrorist conspiracies as if they were facts. He dosen't know how many days there are in a work week. WW2 did not happen, there are more people out in the world, the TV has more than 3 channels, and so on. Even the names and dates of famous events are wrong. Yet, his head is also full of top secret information about government projects that also makes him both a valuable asset and a danger to everyone around him. Because of this he cannot function in normal society, and the agents can't psychoanalyze him to figure out what's going on in his head. This is actually a pretty clever tactic on the writer's part to get the people reading the book interested in the comic and introduce them to its world and create a very unique character.

Just as the kid gets to the base we learn that the boy is just one of a group of genetically engineered / superpowered people. The soldier that's explaining this, a woman, the one who's in charge of this government authorized task force, drops the backside of her pants to show this tattoo at the top of her ass. Everyone who has powers was genetically engineered, and this is a marker that proves it. He has one as well. We also learn that one of the other soldiers can make other people see illusions, so the team can look like anything when they're out in public, like electricians or firemen, that way people don't freak out about the soldiers with the guns and trucks. The man then makes the soldier lady look like she's in a french maid costume for a few seconds, and she's completely unaware of this when he does it.

The kid is running high on paranoia and military training. The only reason he's willing to listen is A, they've got all the guns, and B his parents lied to him and, I'm pretty sure, tried to kill him with a radiation bomb. He certainly dosen't want to join either of them at this point.

Then he gets a tour of the base. Inside the middle of the place is a really fat dude watching TV stuffing his face, who the woman soldier explains has a power capable of canceling/ absorbing other people's powers, or else many of the people on the base wouldn't be able to live as their powers rage out of control. As one of the few superpowered people who can walk through a crowd, look normal, and control his abilities, he's expected to help out. Because without his help more people will die.

His fist mission is somewhere in africa where a girl born from two other supers lived her whole life in the crash site of their aircraft. She inherited two powers. The first is the ability to absorb or bend light. The other is to rapidly age and kill things that get near her. She's never heard a bird call because her area of effect is huge. Every once in a while a nearby village sends a sacrifice to her with food, the young boy aging into an old man when he gets to her, then falling down and rotting away to dust. The food is okay though and she eats it.

So the kid goes into the jungle and makes his way towards the invisible, now migrating, eight year old superpowered death aura. He's incomplete communication with his superior, the soldier woman. He's wondering if his other powers, a mimic reflection, will work when he gets there. But nobody knows.

So he gets there and he meets the kid, his own power canceling, reflecting, mimicking, making him immune to her death aura. She's never heard a person's voice before and totally trusts him because she dosen't know what fear is. And he leads her out of the jungle and away from the city she was headed to.

Then a military sniper from several miles away shoots her in the head. The kid is pissed at the woman soldier who was in charge of the operation and she lays down the law. The girl had no language skills or ability to communicate. They didn't have the ability to take care of her. Her life would be in complete isolation and there was no way to guarantee that the fat man could cancel her death aura, since his area of effect is smaller than the girls. Not when she kills everything in a many mile radius. They couldn't even move her out of the area. And she wasn't the first super whose out of control powers threatened to kill millions of people accidentally who they had to kill.

And that's about all I remember.

The comic book I'm looking for came out, I believe, when people were doing their X-MEN ripoff on TV with Mutant X. Later on I saw Painkiller Jane and thought, "Hey, that's like that comic I saw once." and I've been looking for it on and off.

The series was called Hunter-Killer. Written by Mark Waid, with the first several issues drawn by Marc Silvestri. It began coming out as a Top Cow production (released through Image Comics) in 2005.

I read the first issue, several years ago, and it starts out just as you describe. The nuclear family of Mom, Dad, and a son named Ellis, all living in a remote cabin out in the woods, for reasons the son has never quite understood . . . and then it becomes clear that someone has finally tracked them down and bad things are about to happen . . . and then things get really crazy, what with the parents suddenly demonstrating scary superpowers which Ellis had never known about before. 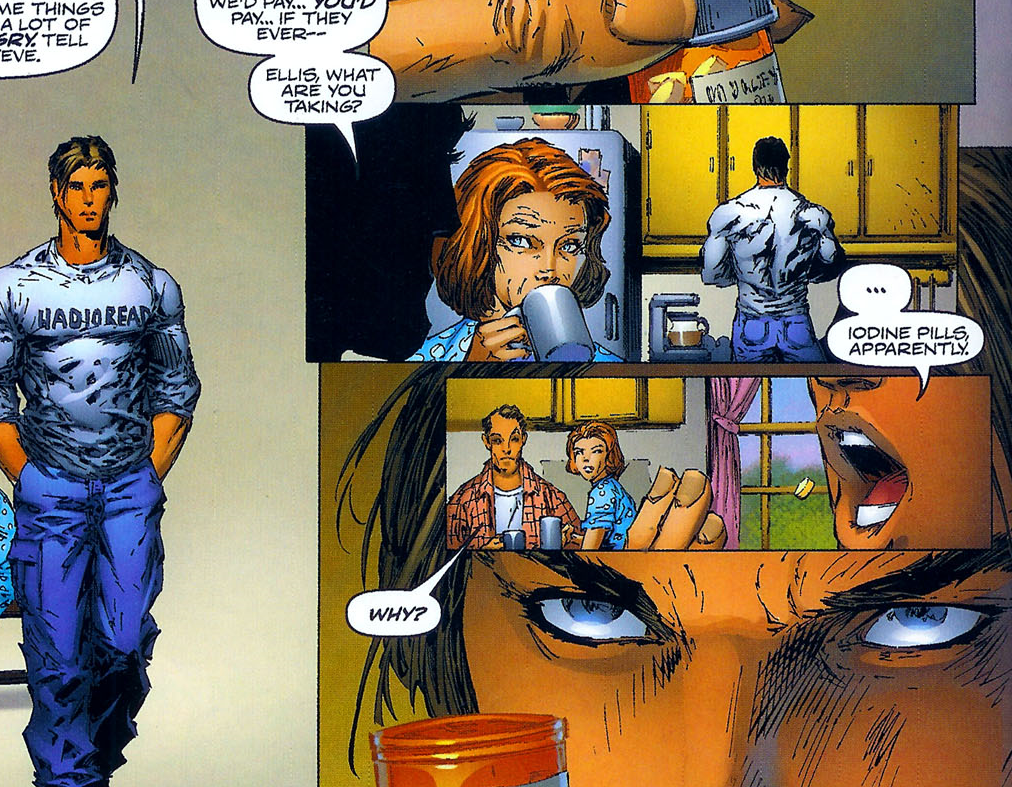 "Crazy" also includes the shocking plot twist when, after Ellis's "Mom" dies in battle with the attackers, his "Dad" suddenly seems to feel that the only sensible thing to do is to kill their "son" before he falls into the wrong hands. "Dad" starts going into a long-winded rant about why this is suddenly necessary; apparently he was hoping Ellis would "listen to reason" and not put up a fight in self-defense.

(I was having serious trouble with the basic premise in that scene -- and I don't just mean the part about "please don't make this any harder than it has to be" as a speech which "Dad" seemed to honestly believe might magically persuade Ellis to just hold still and let himself be killed, although that was bad enough! My main point was: If they thought his continued existence was so dangerous to the rest of the world, and if they were willing to kill him to prevent that, then why hadn't they played it safe and killed him years ago, just to be on the safe side, instead of waiting until the Very Last Minute -- which might turn out to be "too late to get the job done," as indeed it did?)

Not the answer you're looking for? Browse other questions tagged story-identification comics genetic-engineering powers government or ask your own question.

23
Looking for two stories about a telekinetic boy
6
Fantasy short story with soul-taking magic users
3
What's the name of this horror story for kids?
3
Kid in a car accident goes into a coma, gets transported to a different land, has to fight sister's boyfriend for his life
9
Help identify a collection of short stories
8
Comic book about guys with powers that are hunted by society
8
I’m looking for a book about an orphan girl who is found by a boy and his uncle
5
YA horror mystery book with mentions of witchcraft and Joan of Arc
3
Book with a girl werecat who works for the government