Do all Klingons have piece-meal disruptors?

In "Heart of Glory," two captive Klingons form a disruptor beam out of pieces taken from their armour and clothing.

Do all Klingons have this system? Only members of the military? Or is this something special the renegades cooked up?

Most Klingons would rather be armed than eat. You can't get into Stovokor wielding a bowl of Gagh. I would consider this a possibility for most species in the Alpha Quadrant who are using Federation-level technology. Building modular holdout weapons does not seem to be a stretch for Klingons, covert agent Romulans, or Federation-space mercenaries such as the Breen.

It would also make sense since Klingons are always wearing armor and their honor sashes, which could under the right circumstances, double as bandoliers and ammunition harnesses. It certainly seems plausible given the nature of Klingons and their desire to have a weapon available. 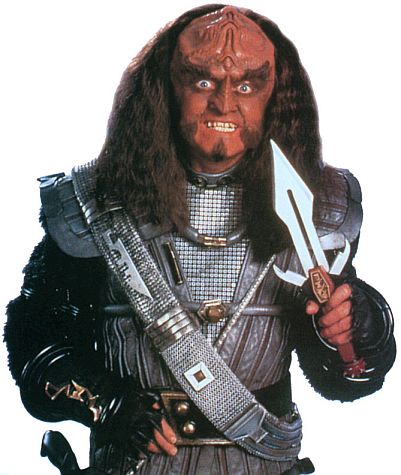 I would imagine that this is something that these two renegades cooked up. If all Klingons, or even just all members of the military, regularly carried the equipment to build a disruptor, you can be pretty sure that people would know about it. Every Klingon ever captured would be stripped naked and be given a thorough cavity search.

Because that didn't happen, it is safe to assume that building a disruptor out of scraps of armor and uniform is a rare enough occurrence.

The Enterprise and Voyager crews have also fashioned phasers out of random raw materials laying around when the situation (and/or plot) requires it, it's just them doing what they need to survive. As for being able to use armor for such a purpose, Memory Alpha doesn't have anything to say about that. It's possible, but I suspect from the nature of Klingons they'd be more likely to have hidden melee weapon pieces than disruptor parts in their armor.

Even Spock (in Patterns of Force) used the crystals from his and Kirk's subcutaneous transponders to create a crude laser beam to cut the bars from their holding cell. So Klingons with disruptor parts hidden as apart of their uniforms should not be a big surprise.

Not all Klingons use this, but ANY Klingon who can use a weapon in their culture has hidden weapons, in fact, in the STRIKE ZONE novel, Worf tells JLP the number of hidden weapons he has stacked in his Federation uniform (much more of a challenge than in Klingon uniforms) and he gains honor points with the klingon ambassador for that. This conversation came out due to the need to have all delegations, Klingon and Kreel alike, go into the talks without weapons. If I remember right, it's actually a competition of honor to see who can hide more weapons. :)

Just remember: there are civilian Klingons who can't use weapons, so not all klingons are special opps :) I think this answers the question

As far as stripping a warrior and not having any weapons are concerned, it is not true as a warrior is a weapon by his very nature.

Giving him a blade or energy weapon is merely an extension of that weaponry and not diminishing it by any means. Training and experience are what hone his abilities and makes him a more efficient weapon.

The Mok'barra is a prime example of this as it teaches non-armed combat techniques much like the arts of Karate, Jujitsu and the like. Being skilled in combat, armed and non-armed is what makes one a warrior.

Anyone can become skilled in these techniques and therefore it's not a strictly military action, but a dedication of the individual to regiment, training and experience that makes them a living weapon.

As for someone using pieces from their normal duty dress and piecing together a weapon, that is strictly a matter of planning for every contingency and any warrior worth his house is going to do that.

Having them there simply means they have had experiences where this was necessary for them to succeed in their mission. That it passed the transporter scanners is not amazing as it was broken down into it's base components and the computer didn't recognize it as a weapon because of this.

Once more it's a matter of the mind of a being versus the memory of a computer. The computer knows what a weapon is, basically once its assembled, but its parts can be used for so many things that it doesn't consider it as that until it's assembled.

A disruptor's power sources can easily be used for communications devices as well since they are simple batteries. just as most of the other parts are used for everyday other devices.

19
Why are there so many technologically similar civilizations in the Star Trek universe?
9
What is Starfleet protocol for disposing of an unclaimed body?
3
Does Tosk kill the hunters when he shoots them?
7
Why would the Federation allow a trial and request for extradition of Worf without formal relations in place with the Klingons?
5
Are the Cardassians (and Breen) required to withdraw from their homeworlds?
15
How did the transporter malfunction in "Star Trek: The Motion Picture"?
11
In the first episode of 'Star Trek: Discovery' what was the point of the Klingon 'torchbearer' vessel?
3
Did the Klingons damage the relay?
32
Do Klingons have escape pods?
8
Are all members of the United Federation of Planets on actual planets?