Why did Wednesday tell Shadow to toss the cell phone?

Why did Wednesday tell Shadow to toss the cell phone when "2 Cell Phones" was on his shopping list? Why didn't he note that to Wednesday? 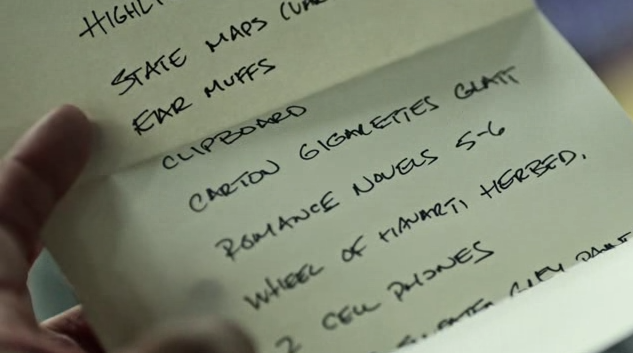 The only explanation I can come up with for the shopping list: it was Shadow's addition to the shopping list, not an original item by Wednesday. Shadow explains in the car that Wednesday needs a mobile phone, for that crucial thing called communication.

As to why Wednesday refuses to have one - it's because he knows the New Gods have eyes and ears everywhere, and modern technology is their forte. As seen later in the series, Wednesday immediately recognises a particular god's eye when

shown the satellite imagery in the police station.

I think it's safe to assume the same god (or some other god, doesn't matter) has easy access to mobile networks as well. In order not to supply them intelligence about himself, Wednesday prefers not to use the technology.

As to why this wasn't in the novel - it was written in 2000, I imagine mobile technology wasn't as popular or widely available back then as it is now, and certainly Wednesday wouldn't want to mess with that new stuff anyway, likely for the reasons I proposed above.

The "2 cell phones" on the list is most likely a continuity error, it is even written as such on the fan-written IMDB

In the presented scene, Wednesday is clearly surprised (and annoyed) at the purchase of the phones. Shadow doesn't respond with "It was on your list" or anything similar, hence it is most likely a prop list written by someone in studio, who misunderstood the scene.

As to why Wednesday doesn't want them - he doesn't trust technology as it is the domain of the New Gods.

6
In American Gods, what were Wednesday's plans regarding Sweeney and Shadow?
2
How did everyone find out about Shadow's dream?
3
Were there any other serious contenders for the role of Mr. Wednesday?
4
The ending of American Gods makes no sense to me. Wednesday's plan
8
Why does Horus consider Shadow critical in American Gods?
4
Why does Laura never mention that she has been "sacrificed for a god"?
5
Why shouldn't Shadow practice the coin trick Mad Sweeney taught him?
12
Why did Wednesday ask Shadow to hold his vigil?