I am looking for the name of a kids animated space movie from the 70's or 80s.

I vaguely remember the people or one species thought the other creature/species was bad. The bad "creatures" looked like a beetle type thing that had many round glass spheres like eyes and tentacles.

By the end they realise the creatures are actually good and need help to survive and the tentacles can heal.

This could be Hayao Miyazaki's Nausicaä of the Valley of the Wind.

I am looking for the name of a kids animated space movie from the 70's or 80s.

It's a 1984 Japanese movie. Its first release in the United States (and then worldwide) in 1985 was titled Warriors of the Wind and was about 30 minutes shorter than the original one.

The bad "creatures" looked like a beetle type thing that had many round glass spheres like eyes and tentacles.

They are called "Ohmu" and look like this, with round, shining eyes, many short legs and thin feelers 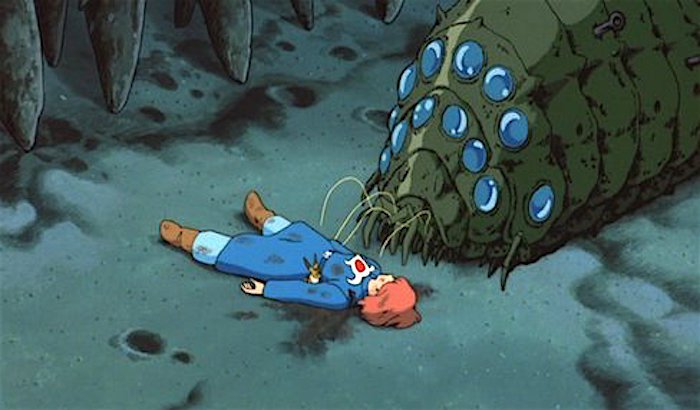 (note that this one is a small specimen, older Ohmus are much larger).

I vaguely remember the people or one species thought the other creature/species was bad.

The story is set in a post-apocaliptic world, where most of the surface of the Earth has become uninhabitable and is covered by the Toxic Jungle. Ohmus are feared because they are so big that they can destroy the small human settlements and can further spread the spores creating the Toxic Jungle.

The protagonist, a girl named Nausicaa, discovers that the flora and fauna of the Toxic Jungle is actually cleansing the world from the radioactive / poisonous elements, and decides to save the Ohmus from a militarist group planning to kill them.

In the action she is gravely wounded, and is healed by the Ohmus.

19
Late 80s - mid 90s Disney TV movie with mechs
5
Novel where intelligent species of the galaxy get wiped out periodically
5
Movie identification:scientists study a flying saucer and try to make it fly (70s or early 80s)
10
Looking for a book about a crystal like prison planet
6
Fantasy TV Show from the 80s i saw on Public Television when a kid
13
Obscure 80s-90s TV series with a spaceship Volkswagen and a giant space baby
13
An animated sci-fi movie with a fully armoured antagonist and a pale looking child