Is there an equivalent to The Federation in the Delta quadrant?

The United Federation of Planets spanned thousands of light years and had over 150 member planets across the Alpha and Beta quadrants. For the purpose of this question, I'm considering the following to be important traits of the Federation.

With these qualities in mind, is there something resembling the Federation in the Delta quadrant, around the time of Voyager? I didn't watch all of Voyager, but the Delta quadrant always seemed like a vast and desolate wasteland, with independent systems here and there, and the occasional violent predatory group attacking them.

The part about "multiple species and cultures" is optional, but does speak to a Federation-like mentality of peaceful cooperation. Sadly I suspect the Borg have prevented most multi-planetary civilizations from growing too powerful.

In a word, no. Each of the regional powers that the Voyager encounters during its travels have at least one major feature that would cause them to be crossed off your list.

No society even comes close to Federation levels of cultural/societal diversity and interest in peaceful exploration. 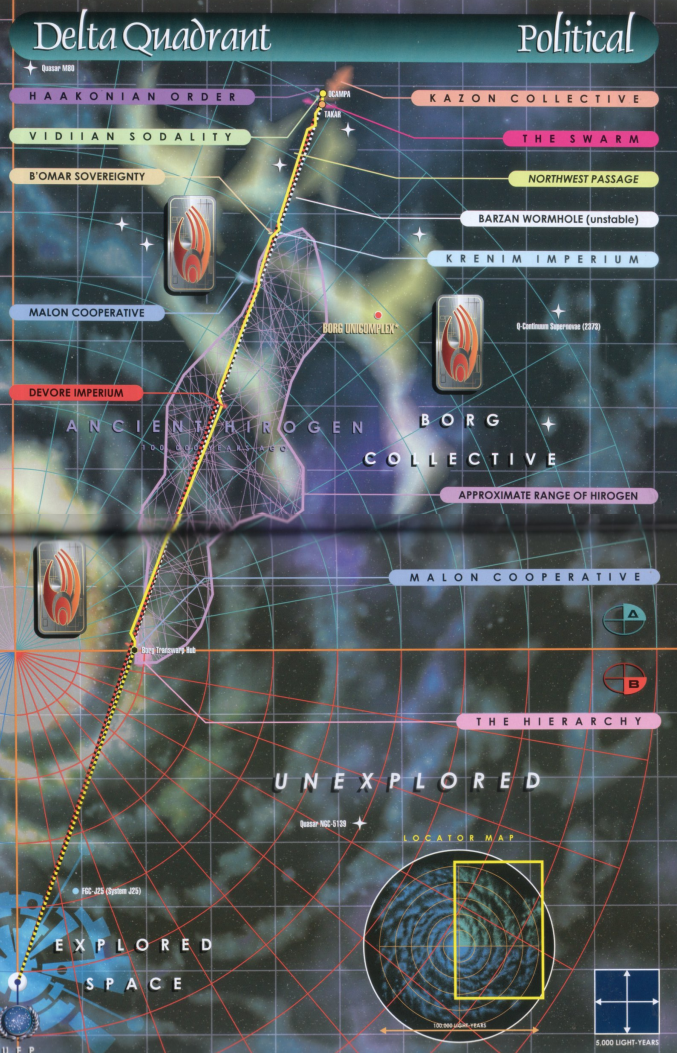 I would argue that although larger forces in the Delta quadrant can’t really be compared to the Federation due to how ideologically different they are, alliances and systems similar to how the Federation operates do exist. For example, the Kyrians and Vaskans. It could easily be argued that they had a similar ideology and philosophy to the Federation, perhaps even trying to copy its system (due to Voyager’s doctor telling them about it?), and just operated on a smaller scale than the Federation itself.

Territory: Considering they have access to technology such as starships and holodecks, I’d say that they have gained control of a system or two, or at the very least, have the ability to.

Peoples and Cultures: Considering both species are unique and live peacefully with each other, I would say they aren’t very xenophobic. Combine that with the fact that they let a hologram with the appearance of a human become a medical leader in their world.

Peaceful or Not: From what they’ve seen, 700 years later after the “Voyager incident”, they seem to be pretty peaceful after the true details of Voyager were found. I hate to bring up the point about Voyager’s doctor becoming a medical leader on their home world again, but if he was willing to stay on their planet for a long time, they couldn’t have been all that violent, could they?

Powerful or Not: Again, they had starships and directed energy weapons, so they must’ve been able to defend themselves quite well.

10
How powerful are supernovae in the Star Trek universe?
11
Universal Translator: Sometimes working instantly, sometimes not at all?
21
How was Voyager still in the Delta Quadrant at the end of the series?
7
Why do aliens from the Delta Quadrant also refer to that part of the galaxy as 'Delta Quadrant'?
2
How many Voyager crewmen die?
18
Were the Borg Always intended to be a Delta Quadrant power?
17
How long does it take to cross Federation space?
4
Technology sharing with new members in the United Federations of Planets?