How was Ursa's absence explained by Ozai?

How was Ursa's absence explained by Ozai?

Her disappearance must have been quite the palace intrigue in the Fire Nation.

Treason, but unknown on what grounds.

In the episode "The Day of Black Sun, Part 2: The Eclipse", Ozai tells Zuko his mother was a traitor:

OZAI: Don't you want to know what happened to your mother?

ZUKO: What happened that night?

OZAI: My father, Fire Lord Azulon, had commanded me to do the unthinkable to you, my own son, and I was going to do it. Your mother found out and swore she would protect you at any cost. She knew I wanted the throne and she proposed a plan, a plan in which I would become Fire Lord and your life would be spared. [...] Your mother did vicious, treasonous things that night. She knew the consequences and accepted them. For her treason, she was banished.

OZAI: Perhaps. Now I realize that banishment is far too merciful a penalty for treason. Your penalty will be far steeper.

Ozai doesn't go into details; one needs to read the comics for the full story. In The Search (2013), it's revealed that after the death of Iroh's son, Ozai asked Fire Lord Azulon to become the next heir. That was seen as a great disrespect, and Ozai had to exile his son Zuko to make up for it. Ursa heard of it and made a deal with Ozai; she'd make an untraceable poison for him to kill Azulon, but Zuko would be safe. Ursa had to leave after that, as Ozai couldn't trust a resentful poison-maker at his side.

So how was Ursa leaving presented to the public (and not just what Ozai may thought of it to himself and Zuko)? Probably Ozai couldn't say anything about the poison thing, and the exact details aren't given, but Ursa was said to be a traitor. This is evidenced by the comic Smoke and Shadow (2016), where Ukano, leader of the New Ozai Society (a rebel group not acknowledging Zuko as Fire Lord), talks about "the traitorous Ursa".

As a reminder, Ukano is the Fire Nation officer who was stationed in Omashu, an important Earth Kingdom city. He's also father to Mai, and to Tom-Tom, who was "kidnapped" by Team Avatar in "Return to Omashu" (S02E03). My point is that while being an Ozai fanatic, there's no indication Ukano was "in the know" about what happened to Ursa, and was likely given the same reason as everyone - namely, that of treason. Note that the booing crowd seems pleased by the "treason" explanation as well. 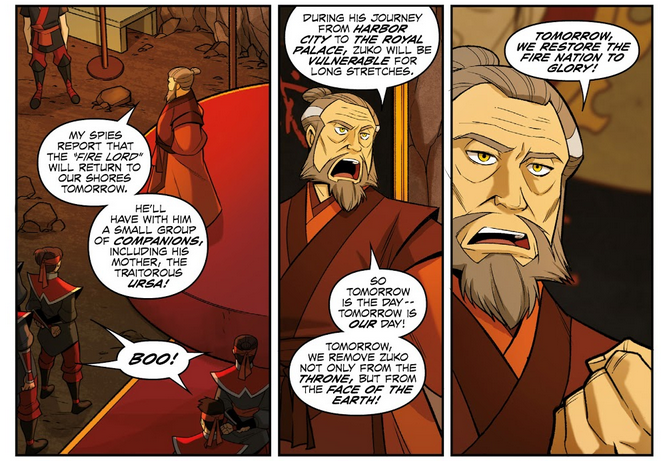 17
How does the Fire Nation survive through the 100 years between appearances of Sozin's comet?
12
Why didn't Iroh inherit?
13
How did the fire nation kill all airbenders?
5
Shouldn't Ozai have remained "Fire Lord"?
3
What happened to Firelord Ozai's supporters/followers after the Hundred Year War?
2
Did the Fire Nation support child labour?
15
Why was Toph put in a wooden cell in the Fire Nation city in Season 3 Episode 7?
6
Why was the Fire Nation so indifferent about the Northern Water Tribe after conquering the Earth Kingdom?
2
How did Azula know to not take credit?