What is the “big wooden fork” a reference to?

When Thor and Korg are at the weapons rack preparing to for Thor's fight against the Grandmaster's champion we have the following scene. In it Korg offers up a "big wooden fork" as a weapon to use but both of them quickly dismiss it.

Thor, Korg, and a gaggle of other prisoners/fighters have been led from their cells to a PRE-FIGHT HOLDING AREA.

Korg and Thor are by the weapons rack.

Korg: Yuck! There’s Still someone’s hair and blood all over this. Guys, can you clean up the weapons once you finish your fight? Disgusting slobs.

Korg: Yeah, not really useful unless you’re fighting off three vampires that were huddled together. 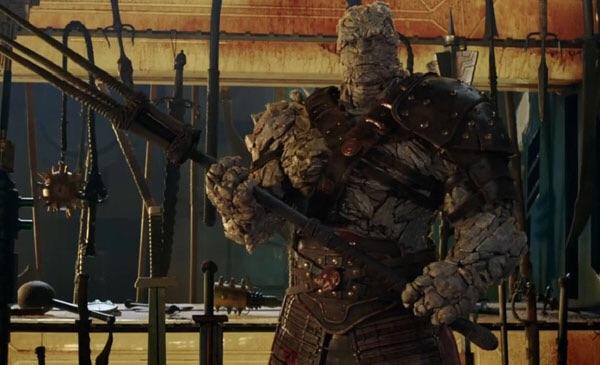 Inverse and various other sources such as reddit theorise that this is a reference to What We Do in the Shadows. This is because Taika Waititi directs both, plays Korg and one of the vampires in the latter.

However, is there a comment anywhere from Waititi confirming that this is the reference or is this a reference to something else?

You are looking into it too much. According to the director, that scene was largely ad-libbed.

Taika Waititi: And once we got to set and saw all these ridiculous weapons that the art department had made [...] we just basically started improvising, ad-libing, and started making fun of all these weapons.
Good One - Why Thor: Ragnorok Is So Damn Funny

Waititi goes on to explain that that scene had multiple takes that were 10+ minutes long, and that afterwards they edited it all down.

In fact, a lot of Thor: Ragnarok was created in this almost flippant and care free manner. Earlier in the same interview, Waititi said:

Thats how my sets usually work. It's gotta be fun and a lot of music and lightness. Its also a very creative space where mistakes and dumb ideas are encouraged. Because I think from dumb ideas is usually that's where great mistakes and great jokes come from.

We didn't really do much rehearsal either. All we did was talk about scenes. And as the film was being written and rewritten, the writer, Eric Pearson... I was also like planning out the jokes and things that I... I would just write down a list of things I thought might be good to have in the scene, but I didn't bother trying to put it in the script because I knew it would have to go through five different people to be approved. And often people don't understand the humor or how a good a joke could be until they see it.
Good One - Why Thor: Ragnorok Is So Damn Funny

As for the joke itself, in legend, vampires can heal from most injuries fairly quickly. One of the few known ways to actually kill a vampire than, is to drive a wooden stake through its heart. Therefore, if you have three vampires huddled together, the wooden fork would be an effective weapon.