I remember this comic book from around 2000's. I was too young to actually read it but stared at the cover very often. I don't think this was a series but perhaps a pilot of some sort.

The cover had these two girls in it, a blonde and a brunette, from a backward angle. They were riding a speeder, rocket or something like that. The other one was steering and holding her butt up. And the other one was sitting down with this great smoking gun on her shoulder. They were wearing skimpy outfits that had this metallic looking glossy texture and the shape reminded me of one-piece swimsuits, just with lots of holes

I also think that on the flip side of the comic book, there was a different story with the same characters, but drawn in a 'manga-ish' style. But I don't think the comic itself was Japanese, the other half had very western looking. Only once I saw a glimpse of the contents and it looked kind of violent, with blood and everything.

And I don't think this was like an erotica or anything like that. It was sold in regular shops. I once remember reading a Spawn comic that was on the shelf next to this one, in our local super market.

The cover I remembered was from Adam Warren's "The Dirty Pair Run From The Future" #1(of 4). 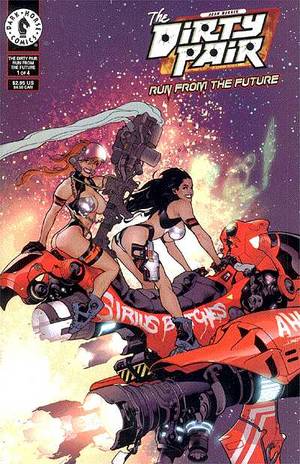 So apparently I misremembered a lot of things. The hair colours were wrong for one. Secondly I wasn't aware that this was an "English-language manga"-comic, (don't really know how that works) based on the Japanese light novels, manga, anime etc: “Dirty Pair”.

Thank you, @FuzzyBoots for setting me on the right trail.

6
Sci-fi comic from the 90s or 2000s; main character is a girl with white skin and black markings around her eyes
11
What was this French comic, published circa 1990, involving a group of mages fighting?
12
Comic/Manga from early 2000's: thief-like guy with a snarky fairy companion, accompanied by a female mage and a tank
9
Nintendo Game involving a fighting tournament and superhero costumes - Magazine comic adaptation
44
Late 1960's Comic Book with H shaped space ship
7
Late '70s / early '80s Comic With Lizard and Woman in Wasteland?
7
Asian sci-fi movie from early 2000's with two girls fighting on a rooftop?
2
Anime about two girls who have compact mirror-like things with little Tamagotchi-like creatures, and transform into cute outfits to battle monsters