Are there other half-breeds in Harry Potter? [closed]

I can think of a couple:

There was even a story of a girl who wanted to be with a merperson, but society forbade it, so she turned herself into a whale or shark, but if she had children with the merperson, that child would’ve been a half-merperson.

There are several different types of half-breeds in Harry Potter.

Fleur Delacour is part-Veela, her grandmother was one.

“An ’air from ze ’ead of a Veela,’ said Fleur. ‘One of my grandmuzzer’s.’ So Fleur was part Veela, thought Harry, making a mental note to tell Ron … then he remembered that Ron wasn’t speaking to him.”
- Harry Potter and the Goblet of Fire, Chapter 18 (The Weighing of the Wands)

Hagrid is half-giant, his mother was a giantess and his father was a wizard.

“And now he saw the vast outline of Hagrid, illuminated by the light of the crescent moon revealed suddenly from behind clouds; the blond Death Eater was aiming curse after curse at the gamekeeper, but Hagrid’s immense strength, and the toughened skin he had inherited from his giantess mother, seemed to be protecting him; Snape and Malfoy, however, were still running; they would soon be beyond the gates, able to Disapparate –”
- Harry Potter and the Half-Blood Prince, Chapter 28 (The Flight of the Prince)

Despite her denial of it, Madame Maxime is also half-giantess.

Headmistress Olympe Maxime is (in spite of her protestations to the contrary) half-giantess; brilliant, elegant and undeniably awe-inspiring.
- Beauxbatons Academy of Magic (Pottermore)

In the F.A.Q. of J.K. Rowling’s old website, she confirms that Professor Flitwick has a distant goblin ancestor, confirming that part-goblin wizards are possible.

Just like Dean Thomas (see ‘Extras’), Flitwick has a background that I now realise will never see its way into the books because it is not relevant to the plot. He is human but with a dash of goblin ancestry – something like a great, great, great grandfather. This is only interesting in as much as it gives him a perhaps unexpected empathy for people like Hagrid who are, in Death Eater parlance, half-breeds. However, Flitwick and Hagrid have never had a scene together, so Flitwick’s genetic composition has been relegated to the very back of my mind over the six novels in which he features, although I think it has informed his character. Slightly dotty though he may be, he is welcoming of all students, whatever their background (he did say in ‘Philosopher’s Stone’ that he was very fond of Lily, thus establishing that he was not prejudiced against Muggle-borns).
- Is Flitwick a short human or is he some other type of being? (F.A.Q. on J.K. Rowling’s website)

The Circus Arcanus has several part-beings working as freaks in their freak show. It’s not clear if they’re part-humans specifically, but they are half-breeds of some kind.

TINA walks past the street performers working in the open, scrutinizing them. A HALF-TROLL performs feats of strength. A few misshapen and particularly downtrodden humanoids—UNDERBEINGS without powers but of magical ancestry—shuffle around, taking money from the crowd. Horns hidden beneath hats, unusual eyes beneath hoods; HALF-ELVES and HALF-GOBLINS juggle and tumble.
- Fantastic Beasts: The Crimes of Grindelwald (The Original Screenplay)

Part-troll (though this is likely a joke)

Two people are suggested to be part-troll, though in both cases it seems more likely to be an insult rather than a factual statement of genetic possibility. Ron says a Snatcher is part-troll because he’s not smart and smells really bad, two traits common to trolls.

“They weren’t the brightest. One of them was definitely part troll, the smell off him …’

Ron glanced at Hermione, clearly hopeful she might soften at this small instance of humour, but her expression remained stony above her tightly knotted limbs.”
- Harry Potter and the Deathly Hallows, Chapter 19 (The Silver Doe)

Harry also suggests that Marcus Flint might be part-troll, but again this seems like just an insult.

“Harry noticed that she seemed to be speaking particularly to the Slytherin captain, Marcus Flint, a fifth-year. Harry thought Flint looked as if he had some troll blood in him.”
- Harry Potter and the Philosopher's Stone, Chapter 11 (Quidditch)

The November 2006 Wizard of the Month on J.K. Rowling’s official website was Lorcan d’Eath, a part-vampire who was a popular singer in the wizarding world. 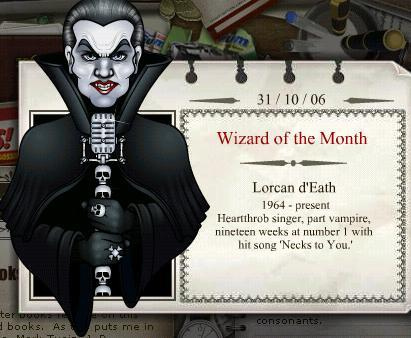 Part-elf (implied as possible on Pottermore)

Speaking of eccentrics, you’ll like our Head of house, Professor Filius Flitwick. People often underestimate him, because he’s really tiny (we think he’s part elf, but we’ve never been rude enough to ask) and he’s got a squeaky voice, but he’s the best and most knowledgeable Charms master alive in the world today.

“The fairy lays up to fifty eggs at a time on the underside of leaves. The eggs hatch into brightly coloured larvae. At the age of six to ten days these spin themselves a cocoon, from which they emerge one month later as fully formed winged adults.”
- Fantastic Beasts and Where to Find Them

Though they’re more intelligent and physically closer in size to wizards, merpeople aren’t implied to be genetically compatible with wizards, nor are any part-merperson wizards mentioned.

“Merpeople exist throughout the world, though they vary in appearance almost as much as humans. Their habits and customs remain as mysterious as those of the centaur, though those wizards who have mastered the language of Mermish speak of highly organised communities varying in size according to habitat, and some have elaborately constructed dwellings.”
- Fantastic Beasts and Where to Find Them

It’s unlikely either fairies or merpeople could reproduce with wizards.

There are various examples of Half-Breeds.

First off, Fleur Delacour and her sister Gabrielle are Half Veela.

Fleur is part Veela, and therefore possesses some of their magical powers.
- Fleur Delacour - Pottermore

She is not a direct half-breed though, her Grandmother was a Veela which makes her 1/4 Veela.

"An 'air from ze 'ead of a veela," said Fleur. "One of my grandmuzzer's."
- Harry Potter and the Goblet of Fire, Chapter 18 (The Weighing of the Wands).

He's also mentioned to be a part-elf though this is never proved but seems to be implied as possible.

Speaking of eccentrics, you’ll like our Head of house, Professor Filius Flitwick. People often underestimate him, because he’s really tiny (we think he’s part elf, but we’ve never been rude enough to ask) and he’s got a squeaky voice, but he’s the best and most knowledgeable Charms master alive in the world today.
- My Hogwarts House - Pottermore

Also, (most obviously) Hagrid is a half Giant.

Harry and Ron find this out in GoF, when they overhear Hagrid talking to Madame Maxime.

Ron looked around at Harry, his expression very serious indeed. "Did you know?" he whispered. "About Hagrid being half-giant?" "No," Harry said, shrugging. "So what?"
- Harry Potter and the Goblet of Fire, Chapter 23 (The Yule Ball)

Lorcan d'Eath was seen in J.K Rowlings Wizard of the month from 2006, he is portrayed as a popular singer in the Wizarding-World. 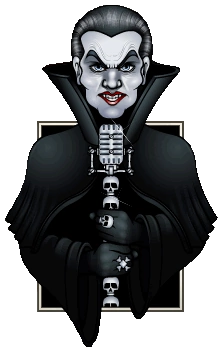