Is this character’s name a reference?

In the new Fantastic Beasts: The Crimes of Grindelwald, towards the end, a character is revealed who bears the name of

Now, it is fairly well-known that the actor who played

also played the character of

Marcus Aurelius in the movie Gladiator (2000).

Has anyone – either JKR herself or the director or someone else in the know – mentioned whether the naming of the character in FB:TCoG (I suggest a shorter acronym in future – perhaps just CoG?) is a conscious reference to that earlier character, or whether it is just coincidence?

Possibly - a copy of Marcus Aurelius is shown on Rowling’s site.

It seems possible that the name Aurelius is a reference to Marcus Aurelius, since the banner for the “Answers” section of J.K. Rowling’s website prominently features a copy of Marcus Aurelius. 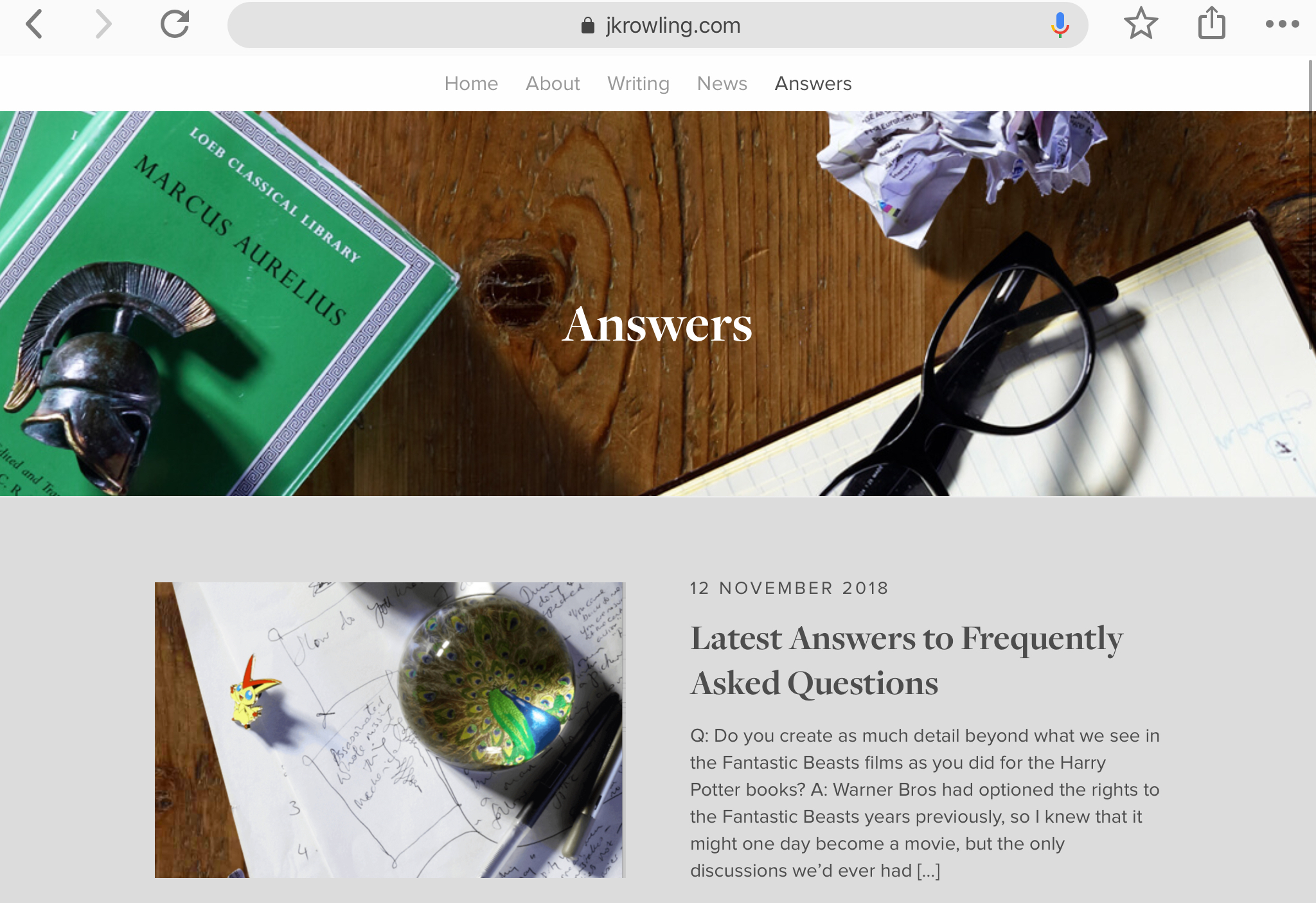 However, it’s also possible that Rowling is showing a copy of that book on her website simply as a reference to her character’s name, without him being named directly after the title character of it. Either way, Rowling has clearly seemed to notice that her character shares a name with the title character of the book Marcus Aurelius, since it’s highly unlikely to be a coincidence. In addition, she’s previously mentioned in one of her tweets that Marcus Aurelius ‘never let her down’, so that almost certainly means she’s both read and enjoyed it.

The tweet mentioning this was written on December 15, 2016, predating the Fantastic Beasts: Crimes of Grindelwald screenplay, so she would have read it before then. Someone who looked into the source code for her website says the Marcus Aurelius banner seems to have been uploaded in October 2016, so she may have had the name chosen since then.

But here’s what also interesting: I dug into the source code of her site, and the image appears to have been uploaded in October 2016 (it’s in the WordPress-created folder “wp-content/uploads/2016/10/JKR_Banner_OPINION_Final.jpg”).
- J.K. Rowling started hinting at that twist over two years ago (Hypable)

It’s perfectly conceivable that she may have named a character after title character of the book, since she’s mentioned reading it and liking it, and she’s previously named some of her characters after characters in classic literature she’s read, like Filch’s cat Mrs. Norris was named after a nosy character in Jane Austen’s Mansfield Park, and Hermione is a Shakespearean name.

Not the answer you're looking for? Browse other questions tagged harry-potter names fantastic-beasts the-crimes-of-grindelwald or ask your own question.

14
Reference for the first name of Sirius Black's mother, known from her portrait: Walburga
19
Why did Alfonso Cuaron change Dumbledore's attire and personality for the third film? And why Michael Gambon?
12
Reference for the first name of Neville Longbottom's grandmother: Augusta Longbottom
25
Why did this character join Grindelwald?
1
Did this character's self-sacrifice grant magical protection for Newt and Theseus?
7
What did Dumbledore teach?
20
Can this connection between Credence and Dumbledore be true?
3
Why did Grindelwald organise this event in the first place?
6
Was the tree pictured in this scene the Whomping Willow?