Is Superman more powerful than the Greek gods?

In DC's Justice League, Wonder Woman (Diana Prince) explains to Bruce Wayne the origins of the Mother Boxes and Steppenwolf.

So Steppenwolf has come before and has been beaten before. But, I am curious to why Superman almost single handedly beat him. Up until Superman turned up, the other members were almost beaten and everything that contributed to the other members of Justice League inflicting any damage to Steppenwolf was directly due to Superman first doing something to weaken him or put Steppenwolf in a compromising position.

So in the first Invasion of Earth that Diana talks about, these are some quick points that led to Earths victory.

In the fight against Steppenwolf involving the Justice League, these are some quick points that led to Earths victory again.

And from the resurrection scene of Superman,

We see that the other 5 members of the Justice League have no chance against Superman; in fact, it was only Wonder Women who was able to slow him down a little bit and as stated before, she has powers given to her by the gods. But, no-one was even close to being able to stop Superman and from this I concluded that he is way more powerful than any of the Justice League.

So, from that, I was beginning to wonder that, if the Justice League and more importantly, Superman overcame and defeated Steppenwolf with what looked like much more ease in the Second Invasion, then what power was required to defeat him in the First Invasion?

In the First Invasion there where dozens or more of the Amazonians, Atlanteans and tribes of men, plus help from many other aliens such as Green Lantern Corps and some of the Gods who also took up the fight. However, it just took 4 meta-humans, one special human (Batman) and Superman to defeat him as opposed to an army Gods, meta-humans, aliens and humans.

That being said, there needs to be something said about the differences between the first fight to overthrow Steppenwolf and the second fight.

So considering all that, was Superman actually more powerful than the Gods?

Or was it just that Steppenwolf was not as powerful as when they first battled him?

In the Silver Age (Action Comics no. 351, June 1967), Superman was shown to be less powerful than the combined might of the Olympian gods. We know this because the Greco-Roman gods (looking into the future and mistakenly concluding that Superman was a rival god, who was greatly revered by mortal men in the twentieth century) created the being Zha-Vam (named for having the powers of Zeus, Hercules, Achilles, Vulcan, Apollo, and Mercury) to challenge Superman. 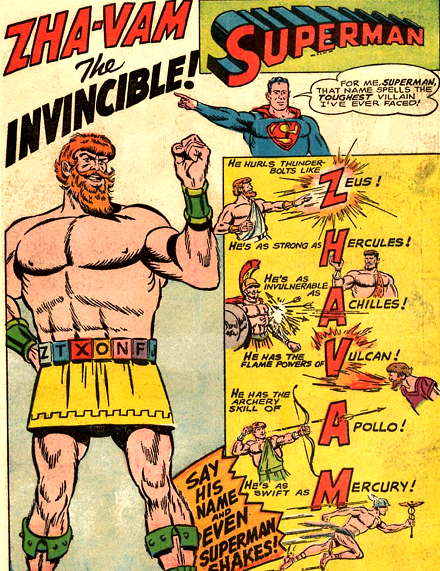 Zha-Vam could activate the powers of other gods by using the letters on his belt. Superman was unable to match the power the Olympians' champion, until he convinced a different faction of the ancient gods to grant him similar equipment in Action Comics no. 353.

Superman in these films is likely stronger than the gods in a fist fight.

In terms of more esoteric definitions of "power" like creating an invisible island of super women, producing an artifact that reshapes reality with a wish, or conquering a city in hours, their ill-defined magic may be more powerful. But in a fist-fight, their durability, output, and speed seems to be lower.

The Gods (and their equivalents) Are Vulnerable

On the precedent that Diana was intended to- and does- kill gods, it's fair to place demigods like Diana and Hercules on par with the gods themselves, like Zeus and Ares. Moreover, Zeus knew Diana would be raised in Amazonian honor-culture, meaning Diana had to be capable of killing gods in single-combat not one-sided assassinations. So to bear her intended mantel of God Killer, she was expected to be at least equal-to the gods to be killed. Thus Diana is a reasonable benchmark of godhood fighting strength.

As Ares killed all the other gods, we know gods can kill gods; as Diana kills Ares, we know demigods can kill gods. So we know the gods lack omnipotence or invulnerability. Ares doesn't dominate the planet as an unstoppable god even when only mortals are about. Enchantress and Incubus were subjugated by neolithic humans, enslaved by modern ones for a time, and ultimately killed by- mostly- conventional forces (two sets of high explosives deployed by a rag tag ad hoc military unit... incidentally, how did the Kryptonian Faora, a fledgling in her power, fair against military first responders by comparison?).

Diana can be wounded by small arms fire which is why she wears bracelets, armor, and a shield. Shazam could have been defeated by the Sins who exhibit relatively minor feats of strength. Finally, Steppenwolf is presumed dead at the hands of Parademons (if he's not dying, that means a world-ender with boom-tube teleportation is simply escaping to threaten the Earth again!) and those can be taken out even by Batman.

Every one of these vulnerabilities (small arms fire, magical lightning, kicked by super strength, blown up by a man-portable explosive, mauled by minions) are magnitudes less than the force of a point-blank nuclear strike survived by Superman. None of them come close to the scope of instantaneous destruction of mankind's most powerful weapon. Superman is significantly less vulnerable to direct attack than the gods.

The Gods Have Lower Feats

None of the gods demonstrate output that matches Superman's greatest feats- from catching trains (200-tons), derricks (150-tons), and arctic vessels (50-tons), to punching through the World Engine, smashing through a mountain, etc. The top end involve hundreds of tons easily. Not to mention this apocryphal feat wherein he supposedly shifted a tectonic plate!

As basic as his flying punch is, no other character has replicated that kind of direct destructive power. Maybe a lot more of a light show, but nothing as strong. Ares greatest feat-of-strength is containing Diana. Diana's greatest feat of strength is lifting a tank (28-tons). Shazam has the strength of Hercules- a demigod like Diana- his greatest feat of strength was lifting a bus (15-tons). The Amazons are able to hold Steppenwolf back from touching the Mother Box... a New God that stands toe-to-toe with the Earth's ancient ones.

In terms of speed, all the gods fight at fully observable speeds. While Diana is still faster-than-a-speeding-bullet in her fastest speed feat, she is not invisibly so; like when Flash's speed can't be perceived by security camera footage. And yet Superman is able to keep up with that speed.

The question uses one of the parties who has had the opportunity to compare the two directly (Diana being another candidate but with less experience in both) as a benchmark. While the combined pantheon drove the Apokolians back, in one trailer, Steppenwolf suggests that their combined protection is as good as the Lantern Corp or a single Kryptonian. Quote:

"There are no protectors here. No Lanterns. No Kryptonian. This world will fall like all the others."

The implication being that if there were protectors OR Lanterns OR A Kryptonian (singular!)... this world might not fall.

So Steppenwolf, seems to put one Kryptonian on par with all the gods ancient Earth could muster. This shouldn't be surprising because the old gods were basically precursors to the metahumans, not omnipotent deities per se. As Enchantress acknowledges:

The sun is setting . . . the metahumans are a sign of change.

They said the Age of Heroes would never come again.

The time of the gods has set, the Heroes were demigods (like Diana, Hercules, etc)... so the metahumans are their replacement. So it takes fewer superheroes to stop a Steppenwolf and one Superman to replace a pantheon of gods.

Long story short, Superman (the original, kryptonite wasn't even a thing) is the man without limits. (nowadays he has a clear limit to his powers) He even ends up becoming God when he breaks the reality wall in superman prime.

in "real life" the main difference between God, and the gods, is that the latter have limits. So this would mean that superman is stronger than greek gods, yes. To be fair, even wonder women fought some of these gods (like hades) and won, and her power is nowhere near superman. 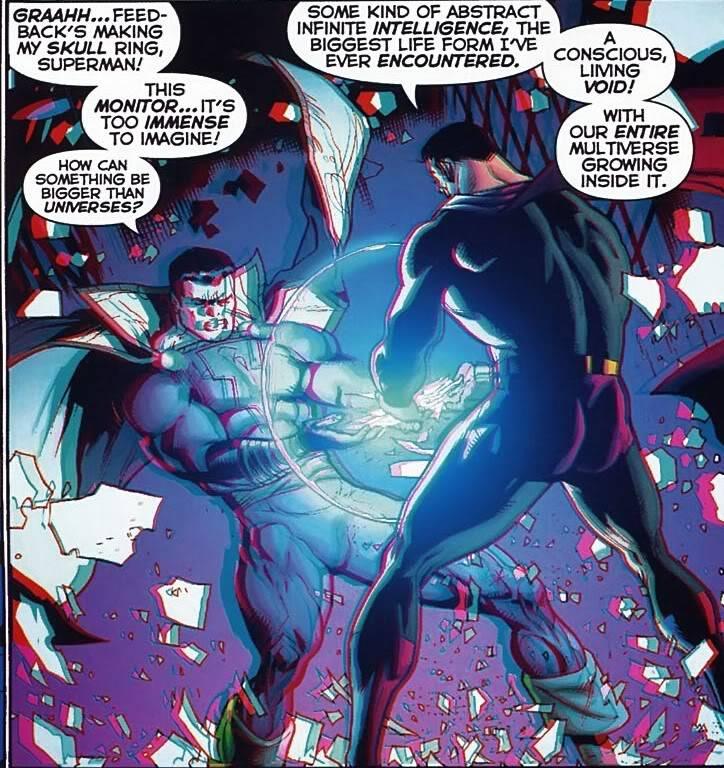 for example. here's super (with the help of shazam) lifting the book of existence. it contains the multiverse (aka an infinite dimension, with infinite weight) In this case in particular at least one of them has to have limitless power or they would not be able to lift it. 2 limits never add to infinite (that's math)

43
In Star Trek, do the Greek gods lack nipples?

21
Is Zeus alive in the new DC film continuity?
4
What is on the other end of the teleportation beam Steppenwolf uses?
10
Who are those heroes and gods in Justice League?
3
Who was that woman in Atlantis protecting one of Mother Boxes?
23
Is Wonder Woman also a speedster just like the Flash and Superman?
11
"The Old Gods died" - how did Steppenwolf know that?
19
Which Green Lantern appears in Justice League?
18
What was written on the arrow which Wonder Woman receives from Amazons?