How come there were no witnesses to the monster when the chamber of secrets was first opened?

CoS Ch.13 In my fifth year, the Chamber was opened and the monster attacked several students, finally killing one.

If there were witnesses to the attacks, then how come Hagrid was expelled? Even with Petrification, the students must have known that it was a basilisk that attacked them. It's hard to believe that a huge snake was able to attack several students and everyone ended up blaming a huge spider.

They may not have seen the creature that attacked them clearly.

The students who were attacked might not necessarily have a clear description of the creature that did it. Although Myrtle was attacked by the basilisk, she only remembered its yellow eyes - she didn’t remember what the creature that killed her looked like.

“So I unlocked the door, to tell him to go and use his own toilet, and then –’ Myrtle swelled importantly, her face shining, ‘I died.’

The important question to answer first is: who were these witnesses? The only two people we can be certain of are Tom Riddle, and Moaning Myrtle, but that gives us evidence enough:

We know that Tom Riddle got Hagrid expelled for keeping Aragog around (and scapegoated him as Slytherin's heir), and that Myrtle saw:

A pair of great big yellow eyes, watching me, over there.

Spiders have eight eyes, but two of their eyes are bigger than the others. 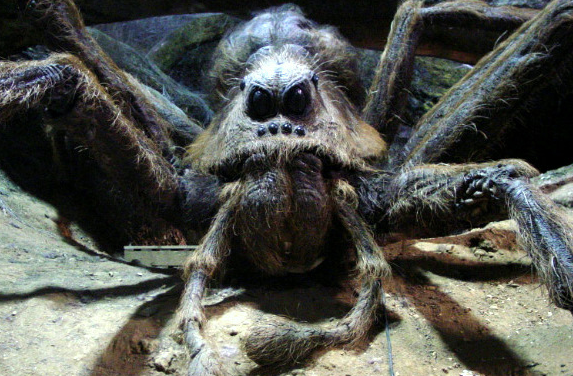 How is it possible to mistake a spider for a snake?

Myrtle had been crying, and wore thick glasses. She had also just been murdered by the gaze of a magical beast that was capable of petrifying multiple students 5 decades later.

The word of Myrtle alone would have been enough, but given that Riddle was a beloved student at Hogwarts, whose teachers were all said to be enamoured by, it's not surprising that it was easy to pin the blame on Hagrid. Additionally, it is said in The Chamber Of Secrets that the attacks stopped after Hagrid's expulsion, likely because Riddle was lying low.

We have only one evidence from an attacker in the books and that is from Myrtle:

So I unlocked the door, to tell him to go and use his own toilet, and then –’ Myrtle swelled importantly, her face shining, ‘I died.’

‘No idea,’ said Myrtle in hushed tones. ‘I just remember seeing a pair of great big yellow eyes. My whole body sort of seized up, and then I was floating away ...’

Apparently she died so fast and abruptly that she wasn't able to analyze the circumstances. Probably is was the same case with others (we don't know how many there were, maybe just a couple) - their attention was naturally drawn to the big yellow eyes first so they couldn't catch the details. Could it be that an attacked person saw the snake from a side\back view first and only then met it's eyes? It could, but it just didn't happened. By chance they all met the Basilisk suddenly and straight eye-to-eye.

Consider when the attacks were.

Firstly, during the Halloween feast. Later, late at night. After that, during class. After that, before a quidditch game.

All of the attacks were timed when there wouldn't be people wandering around to spot things.

The attacks were orchestrated by a skilled, powerful wizard who didn't want people to know the details of the attack. As Myrtle notes, the basilisk can be very sneaky, and they were aided by a powerful wizard.

This was true in the past as well, during the first attacks.

It is possible that Tom Riddle modified the memories of the other victims. Unlike the second time around when he was not on hand (being a mere memory from 50 years earlier), the first time the Chamber of Secrets was opened Riddle was in school. He would certainly have had the motivation to modify their memories, because if they could describe the attacks once they were revived, the trail would likely lead back to him. Modifying their memories would make it impossible for any of them to tell what really happened, and thus make it easier to frame Hagrid. In fact, if we're going with this theory, he could have even implanted false memories that would help implicate Hagrid, which would explain how Hagrid was convicted so easily (though in Riddle's conversation with Harry he implied that it was only his word against Hagrid's, i.e. there was no other corroborative testimony.)

We know that he had the requisite level of magical skill at that point to perform such memory modifications, because we know from Dumbledore in Half-Blood Prince that that the previous summer he was already capable of implanting entirely false memories in Morfin Gaunt:

In the summer of his sixteenth year, he left the orphanage to which he returned annually and set off to find his Gaunt relatives. And now, Harry, if you will stand ..."

Then he returned to the Gaunt hovel, performed the complex bit of magic that would implant a false memory in his uncle's mind,

Not the answer you're looking for? Browse other questions tagged harry-potter voldemort basilisk or ask your own question.