How is Leta Lestrange related to Bellatrix Lestrange's husband Rodolphus?

I know all about how she

causes the death of her infant brother,

but who is she? Is she Rodolphus Lestrange's sister? How does she link with the HP books?

This year, Zoe has also appeared alongside Scarlett Johansson in the comedy Rough Night (which she describes as "so much fun you forget you're even being paid"), and is currently filming Fantastic Beasts and Where to Find Them 2, which will be released next year. "I play Helena Bonham Carter's great-great aunt. She's an icon of mine so it's a real pinch-me feeling to even be associated with her. I think her performance in Fight Club is one of the best by a woman in a film."

That being the case (and based on what we currently know about the two Lestrange bloodlines) this would mean that Leta's great-grandfather was somehow related to Bellatrix's husband's great-(great?)-grandfather's brother, presumably by marriage since the Corvus Lestrange tree doesn't show a brother. 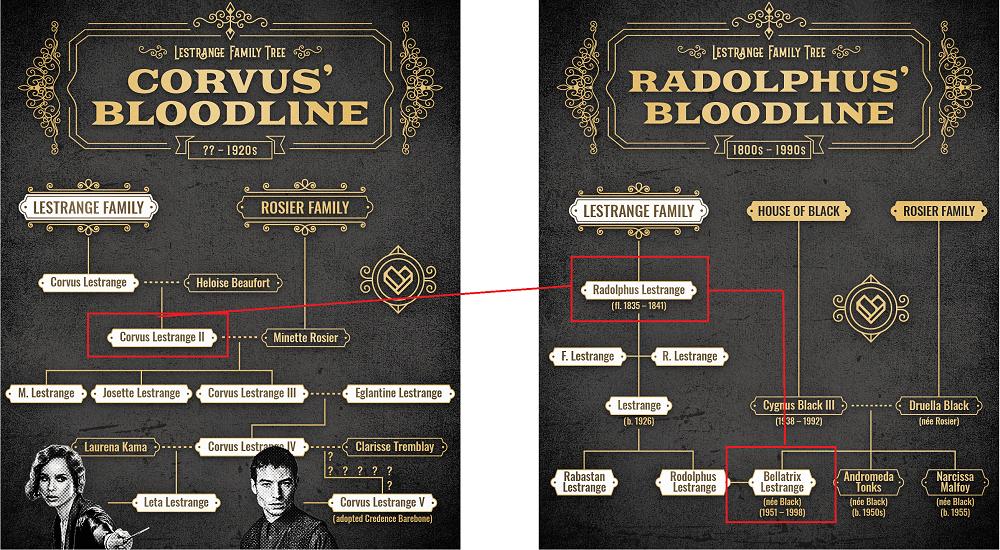 Leta Lestrange is definitely from the Lestrange family which makes her a sure relative to Rodolfus Lestrange, though it is not clear how close they are.

She could be his sister (sister by father, as apparently she was the only child of her mother), also she could be Rodolphus's aunt.

We do not know Rodolphus's age - Pottermore doesn't specify that, but can assume he is same age as his wife Bellatrix or older. Could be even much older, as we don't really know how the marriage was arranged. By the time of Harry Potter events Leta would be something around 95 years old.

Therefore it is possible her father had a son younger than Leta was (making her his sister). It makes Bellatrix's husband up to forty years older then she was, but hey, we know it was an arranged marriage after all.

It is also probable Rodolphus is Leta's father's grandson (making Leta his aunt). Both timings fit.

Other then that she doesn't seem to have any connection to the events in Harry Potter books.

While I don't think Leta is Bella's Great-Great Aunt as Zoe once said in an interview because Leta is an only child now that we know her brother died as an infant. It's unclear how she's related to Rodolphus, I'm guessing some sort of distant cousin.

39
How was Molly Weasley powerful enough to Kill Bellatrix Lestrange?
24
What Happened to Rodolphus Lestrange (Bellatrix's Husband)?
12
Has Leta Lestrange been mentioned in canon before?
10
Why weren't Rodolphus and Rabastan Lestrange also hailed as Voldemort's most loyal servants?
10
Do all the children in a wizard family have to go to the same wizarding school?
22
How can the Lestrange bloodline still exist?
9
Who was Credence travelling with on the boat?
8
Where did Bellatrix Lestrange live after she left her husband?
8
How much did Petunia Dursley know about the circumstances surrounding the death of Harry's parents?