What is the first non-Sol system planet that's colonized by humans in a work of fiction?

To be specific, I'm not looking for "Proxima Centauri B" or that sort of scientific nomenclature, and no Europa or Ganymede or other Sol-system colonies, but rather the kinds of planet names I vaguely recall from many science fiction stories, but can't remember exactly!

1937: In E.E. "Doc" Smith's "Galactic Patrol", the oldest of his Lensman books, originally serialized in 1937-38, humanity has colonized many planets in the galaxy. Among those named are Valeria, home of Lensman Van Buskirk, and the stormy planet Trenco, source of the valuable substance thionite. Also named is Aldebaran II, though it doesn't live up to your requirement of not being a scientific nomenclature. 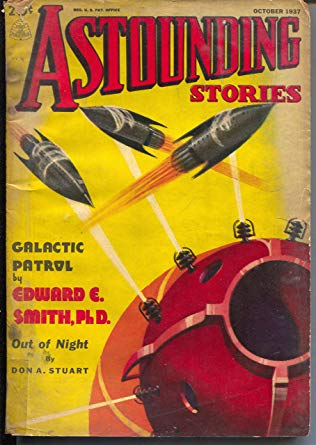 1942: Santanni and Trantor are human-colonized extra-solar planets featured in a number of Isaac Asimov's stories, e.g., in his Foundation series. They were introduced in his novelette "Black Friar of the Flame", first published in Planet Stories, Spring 1942, available at the Internet Archive:

"What good are your rebellions?" came the weary reply. "Are the Lhasinu so much more terrible than the oligarchy of Humans that rules Santanni or the dictator that rules Trantor. If the Lhasinu are not Human, they are at least intelligent. Loarism must live at peace with the rulers."

There may well be earlier examples of named human-colonized extra-solar planets in science fiction. Note, however, that the accepted answer to the question First story to describe humans colonizing another planet? is a 1928 story:

In view of this, it seems unlikely that we will find named extra-solar human colony worlds from before 1928. (The colonized planets in Schlossel's 1928 story are extra-solar, but as far as I can tell without reading it word for word, they are not named.)

1900: In The Struggle for Empire, by Robert William Cole, Iosia is a planet of an unnamed star somewhat more distant than Sirius:

For a long time past, a band of adventurers had been colonizing a planet called Iosia, which was situated far beyond the confines of the Sirian System.

The Struggle for Empire, Chapter III: The First Note of War

This planet is first colonized by Earth-humanity but coveted by the people of Kairet (a planet of Sirius) and becomes the flashpoint in the war.

After successfully defeating the Sirians, the Anglo-Saxon Empire (Earth) requires they also cede the planet Maikat:

The Anglo-Saxons demanded the evacuation of the planet that had been the original cause of the war [Iosia], the surrender of another planet called Maikat, that belonged to the Sirian system, the payment of a huge war indemnity, and the limitation of the Sirian war-ships for the future to their own planetary system.

ibid, Chapter XV: The End of the War

Not the answer you're looking for? Browse other questions tagged history-of space-colonization planets or ask your own question.