Why are Grindelwald's eyes different colours?

In Fantastic Beasts: The Crimes of Grindelwald, Grindelwald is clearly shown to have one black iris and one pale (white or grey) iris. 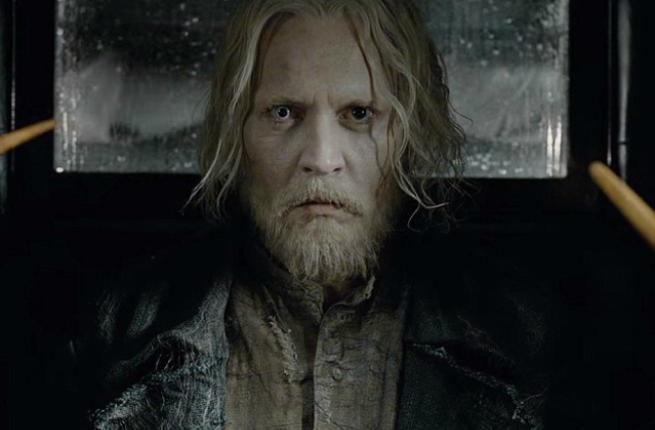 Is there an explanation of why this is the case?

(I'm aware of Johnny Depp's personal point-of-view but don't see that as an explanation in and of itself).

No in-universe reason is given as of yet for Grindelwald’s eyes.

Though it’s possible that there will be an in-universe explanation given for Grindelwald’s different eye colors in information released later on, currently there’s no known in-universe reason. As noted in the question, it’s a choice on the part of Johnny Depp, the actor playing him. When asked about the eyes’ backstory, Depp doesn’t say anything about its in-universe backstory, and only describes it as a symbolic representation of Grindelwald’s internal duality.

He now has, as one of your costars referred to, a “Scary Eye,” one eye rather different from the other. Does that have a backstory, is that just creepy?

It’s a character choice. I saw Grindelwald as more than one, if you know what I mean. I almost felt like he’s maybe two people. He’s twins in one body. So a gamey eye is more like the other side of him. Sort of like a brain for each eye, an albino twin, and he’s somewhere in the middle.
- Johnny Depp breaks silence on Fantastic Beasts sequel role (Entertainment Weekly)

Past that, no explanation is currently given for why Grindelwald’s eyes are two different colors. There may indeed be one, but if there is, it’s not mentioned anywhere yet.

It may be some sort of “replacement” eye like Mad-Eye Moody’s.

The one other person seen in the Harry Potter series with mismatched eyes is Mad-Eye Moody, who used to have two matching eyes at one point, but lost one and replaced it with a magical one.

“Mad-Eye Moody, who had long grizzled grey hair and a large chunk missing from his nose, was squinting suspiciously at Harry through his mismatched eyes. One eye was small, dark and beady, the other large, round and electric blue – the magical eye that could see through walls, doors and the back of Moody’s own head.”
- Harry Potter and the Order of the Phoenix, Chapter 3 (The Advance Guard)

Moody didn’t always have the magical eye - he used to have two normal matching eyes.

“Mad-Eye Moody was sitting there – though there was a very noticeable difference in his appearance. He did not have his magical eye, but two normal ones.”
- Harry Potter and the Goblet of Fire, Chapter 30 (The Pensieve)

Grindelwald may have also gotten a replacement eye at some point like Mad-Eye Moody did.

It less likely may be linked somehow to Grindelwald being a Seer.

Another possible in-universe reason for Grindelwald having two differently colored eyes is his Seer ability. He seems to be a far more skilled Seer than Trelawney, as he can See intentionally.

GRINDELWALD exhales vapor from a glowing skull-shaped hookah. His ACOLYTES watch as the smoke forms a vision of the Obscurus, a swirl of black and flashing red, then resolves into an image of CREDENCE.
- Fantastic Beasts: The Crimes of Grindelwald (The Original Screenplay)

Though it’s never mentioned that Seers have eyes that are in any way unusual, he seems to be more of a Seer than anyone else seen in the Harry Potter series before, and it is an ability related to ‘sight’, so having it could theoretically affect his eyes in some sort of way.