Why did the bullets curve in the Wanted movie?

Why did the bullets curve in the Wanted movie? Why did they not follow Newton's law of Motion?

Was there an in-universe explanation given for why they would act in such a counter intuitive way? Or is there a real world explanation for how it would be accomplished?

However, the movie itself does attempt to explain how bullets are curved through the air.

Each of the assassins have the superhuman ability to speed up their heart to a super-accelerated rate; this enables them to move at a super fast speed and exert superhuman force. When this speed and force is focused on flinging and firing a gun the bullet is curved through the air.

Also most of the bullets they use aren't perfect, they have engravings which (within the context of the movie) alters its flight pattern.

But again, these movie physics aren't based in reality. Mythbusters proved that even with super human speed and force, along with an altered bullet, a bullet could not be curved as shown in the movie.

The logic was that they were using the marks on the bullet plus that motion of the gun while firing to result in a curving effect, the same way (but more dramatically) as you would curve a baseball. (The carving on the bullet acting the same way as the stitching on the baseball, amplifying the effect of the spin on the air pressure.)

Realistic? No. But allowing for superhuman skill and some artistic license, at least entertaining enough to allow suspension of disbelief.

I'm going to assume we qualitatively follow Newton's Laws, even if we don't crunch numbers to prove so.

Just so we're on the same page, here are Newton's laws or Motion:

So from the first law we see that we need a constant acceleration towards the centre of rotation (Swinging the arm when firing only affects the starting velocity, not the acceleration), this requires a force to act on the bullet originating from the same direction, and this would then push against the originator of the force.

So we have two options, as I see it: A force external to the system acts on the bullet, or the forces already acting on the bullet, i.e. air resistance. 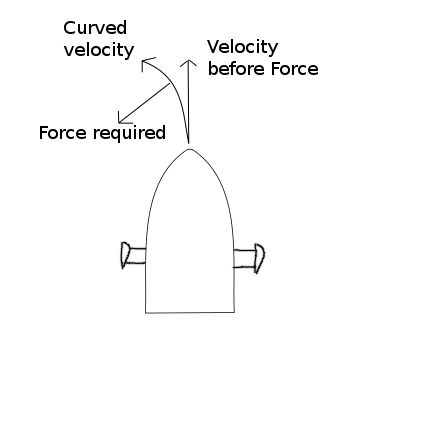 So we can see the velocity the bullet would go before the extra force was applied, the new 'curved' velocity and the force required...

An external force would have to be some electromagnetic force, but I can't imagine that being exerted by an assassin, who would need powers like Magneto.

I've wracked my brains for about 10 minutes thinking of a way to get a force towards a point so we have a curved trajectory, and the solution is the lame looking spoilers/wings on the back of the bullet, and no rifling. It's the only solution (I could think of) that would cause the trajectory we see in the film.

But really, it's not possible. The spoilers would be unreliable at best I'd imagine. A ball could be fired in such a way that the spin could cause it to curve, but making it spin in the barrel would be another challenge, for another day.

I think that a better explanation would have been that each assassin has an innate ability to manipulate probability to a limited degree. Hence when he was trying to "curve" the bullet, it was about his focus and his desire to curve the bullet, not the speed he moved his arm. His focus and will to hit the pig and not A.J. allowed him to instinctively manipulate probability and "bend the laws of physics" to curve the bullet around Angie and hit the pig. Just like the Assassin in the beginning jumping between the buildings, his focus allowed him to bend the rules momentarily to greatly boost his speed and jump strength to clear the distance.

It's not about "controlled, extreme adrenaline rush", it's a temporary, limited manipulation of the laws of physics through focus and strength of will.

To quote Matrix, "The mind makes it real"

Not the answer you're looking for? Browse other questions tagged movie wanted or ask your own question.

4
Why is the original "self" lost through death in The 13th Floor and replaced by the virtual one?
4
Why do the Dead attack Aragorn, Legolas and Gimli in the movies?
6
Movie from the 90s where the superhero gets the strength from the galaxy
6
French sci-fi movie from the 1970s, space scenes filmed underwater
2
What are the motives of the aliens in the movie "Extraterrestrial"?
22
Why is Hagrid's face obscured in the memory recollection in Tom Riddle's Diary?
7
Trying to identify a high fantasy movie on the SyFy channel, two women accidentally bewitch men?
6
Why did the graboid destroy Burt's truck?
7
Sci-fi movie where a guy loses a girl, tries to hijack a train, finds the girl but she leaves him