Short story: guy discovers duplication spell, clones himself for music band in the woods, one clone leaves and starts revolution

The story was narrated by a guy who discovered years ago (after becoming curious about the occult and dabbling for some with no hint of success at other spells he finds in old tomes dug up in old book stores) a single successful bit of magic -- a duplication spell.

Realizing the unwanted attention it could bring, he decides to live under the radar, quietly living off in a cabin in the woods, fairly self-sufficient through employment of the spell (its mechanics is never actually described), either by duplicating money or (perhaps after worrying about the Secret Service noting duplicate serial bill numbers) by borrowing items during trips to the nearest town and duplicating the items themselves before returning them. After seeing an instrument (maybe a trombone) for sale in a shop, he gets it in his head to take up music again, only, in his exile, he doesn't have anyone to play with (and anyway, he may have been getting a bit lonely) so he duplicates himself, and each of the clones take up a different instrument, until they have a brass band. The clones aren't perfect copies, though -- each has at least a slight tendency to accentuate this or that bit of his of his personality, but they all get along fairly well... for a while, anyway.

One of them takes a bit after the original's radical youth days more. That clone (I'll call him the drummer, though I don't actually remember for certain which instrument he played) gets more and more in the habit of passionately talking about politics, to the point that during one such occasion during a jam session, the others just take up their instruments and start playing over him because they don't want to listen to another political rant. The drummer mysteriously disappears by morning, and after looking around for him and realizing he must have departed without notice, they all feel relieved that he's left, as he was getting rather unpleasant. They need to make an extra clone to fill in for him, and it's a while before the replacement clone is good at the drums, but they settle back into their satisfied life.

One day that the original makes the trek into the nearest town to get something (supplies like food have to be replenished sometimes, as duplicated cans have the same shelf-lifes as the originals), and nearly gets shot by a terrified person who recognizes his face, saying something to a companion like "Oh God, run, it's one of Them!"

The original goes back to the cabin to warn the others, but he returns to a sickening scene -- all his clone friends are dead, gunned down. From the casings and general mess, it's evident that a whole troop rushed in and gunned them down, and from the evidence left behind (maybe many identical boot prints) and the earlier reaction in town, it's clear that it was drummer and/or clones of his own.

The original briefly wonders why the killers hadn't waited around to kill him upon his return, too, but then recalls they they wouldn't have known about the replacement drummer, and thus they evidently thought they had wiped out the original with his clones.

For the first time in years, he's alone. Amid the carnage it momentarily occurs to him to clone more of himself again, but he feels like throwing up again at the idea.

From what he can piece together, maybe from final newspaper editions strewn about emptied towns, the clones have been sweeping across America.

I think he mentions, in the text, having furtively espied some of the many-generations-removed killer clones. Maybe even on his way back to the cabin he caught a glimpse of the death squad departing or something. They're grim with hollow gazes, clearly subject to some generation loss effect.

I don't recall where he goes from there -- I think the story may have left it ambiguous at the end, being written in the first person as a record he's leaving somewhere, in case anyone else remains to ever read it.

I probably saw this in an Analog, Asimov's SF, or F&SF from the '70s through early '00s, or in some best-of-the-year collection.

Double, double, toil and trouble by Holley Cantine. I read it in The 6th Annual of the Year's Best S-F. 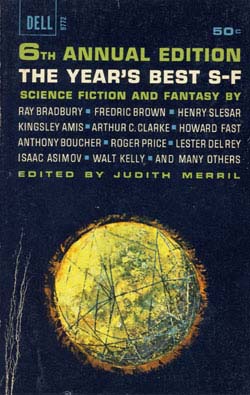 I can provide supporting quotes, but to be honest you've described the story so perfectly that the quotes would just be repeating parts of your description. At the end of the story the drummer (it was the drummer, or more precisely the bass drummer) has doubled himself many times to form an army and stormed Washington. The story ends:

This is an army that puts the ancient Mongols to shame. Not only is it able to do without any service of supply; since each man can carry all his own provisions and ammunition, doubling more as needed, but the supply of troops is inexhaustible, as long as just one of them remains alive, and they fight with a blind, savage fanaticism which has lost every trace of the idealism with which he started.

After reading some of the reports of wanton massacre, I have been strongly tempted to double myself into an army, and go out to try to destroy these monsters, but am deterred by one consideration. What is to prevent me from degenerating into their likeness, if I follow their example? Were not these fiends—and not so very long ago—myself?

11
Novel with clones grown in organages and a princess who has visions of fate
8
Identify this short story: Musician discovers method of duplication, and duplicates trombone, self
10
Trying to find a specific book about clones
3
Have any clones married?
9
70s movie. A man and his clone are trying to find out who cloned him and why they are trying to kill them
6
Young adult/teen maybe children's? Book about a clone (Thriller?)
4
Short story about a boy cloning himself, who then ends up fighting with the clone (open ending/plot twist of the clone being the one that survived?)
2
Manga where the protagonist can only make cursed items (and tokens that remove curses) and gets kicked out of his party
6
English Teenage / Children's Sci-fi series about girl clones, available from the 2000s at most?