What would a picture of Galactus show?

As seen in Has Galactus ever been depicted as anything other than a humanoid? , Galactus looks different to every race, because the mind cannot comprehend what it is seeing. If one would take a picture though would his true visible form show up in the picture, being that a camera just records what is on the visible spectrum, rather than interpreting what it sees?

According to Marvels, Galactus captured on camera looks like Galactus as humans see him: 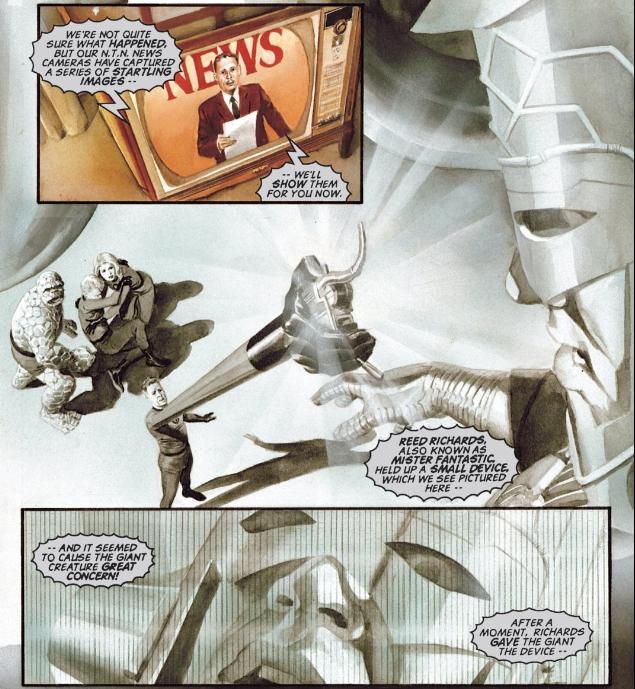 We don't see a non-human watching this transmission, so we don't know if another species watching this would also see Galactus as humans do, or would see him as their race does. As Kevin Workman points out in the comments, it could be that the picture does capture the true image of Galactus, and the viewer would continue to see said image as what they'd see in person.

In practice, however, a picture of Galactus won't reveal that true form (as asked in the question). Whether what's captured is somehow the cultural image of the picture taker, or the "true form" in some way, someone looking at the picture will not see the true form.

(Note that this story was written after Byrne established that Galactus doesn't look like we think he does - however, this story wouldn't be advanced by an image that didn't match what the people saw. And, on top of that, Alex Ross tends to be a traditionalist, and might ignore Byrne's call on general principles.)

66
Has Galactus ever been depicted as anything other than a humanoid?