Who's standing behind Theoden in the “So it begins” meme?

Who are the characters shown here, standing behind Theoden?

I don't know, and can't figure out who they are from the character list on The Two Towers (film) nor after a bunch of googling. This question is specifically for the above scene in Jackson's movie adaptation. Thanks so much.

Edit: This is of course during the battle at Helm's Deep. Thanks to any LotR buffs who might know. Someone sent this around at work and issued a challenge to name the three characters. All in good fun, and happy Friday!

Update: I rewatched TTT and took some video clips, it's a little easier to see the actors, see this, this, and this. Thanks @Valorum for figuring out the character on the right is Gamling, but the guy on the left is still a mystery! He has no speaking lines. movie-dude refers to him as an unnamed extra (see #46). My wife and I went down the list of actors, including those uncredited, and couldn't pick him out. The hunt continues!

Update 2: I got confirmation from a reliable source that the guy on the right in the picture is Gamling (actor Bruce Hopkins). It's much easier to tell if you watch the video I linked (Theoden says "Give them a volley" and then you see a profile shot of Gamling shouting "Fire!"). Even though the guy on the left looks a lot like the picture of Gamling in @Valorum's answer, he is a different actor.

The chap on the left of the image is Gamling. The other guy appears to be an unnamed extra. Both are described in the script as "Captains of Rohan" and seem to serve as Theoden's loyal lieutenants throughout the battle, issuing orders on his behalf. 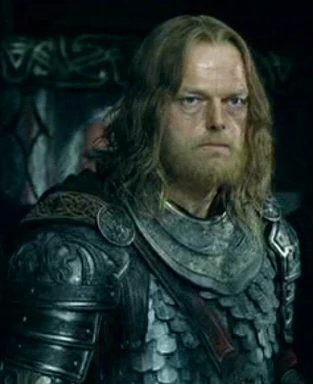 20
Is the white standing stone on the Barrow-Downs magical or evil?
23
Why did Aragorn and Theoden ride out at the Hornburg?
28
What was behind the door in the Paths of the Dead?
52
How can a storm cloud in Middle-earth “move behind the sun”?
4
Did George Lucas ever suggest that he was influenced or inspired by Tolkien?
7
Did Gandalf tell Theoden about the Ring?
35
What were the two standing stones that Frodo sees?
27
How did Aragorn, Legolas, and Gimli know what Uruk-hai were?
16
Why did Theoden allow the Uruk-Hai to approach Helm's Deep without harassing them?