I have been trying to recall what this book is from almost thirty years, I read it as a teen. I think it was published in the 1980s.

The story takes place in a distant space faring future, where everyone is catalogued and designated by a galactic A.I. super-computer (space S.S. of a sort). The galactic government is tyrannical, and a small time private detective is recruited by a rebel faction to be the perfect weapon/spy to bring down the computer and government.

In this novel's universe, some people are born with mutations and abilities. The main character is a mutant whose power is that he can not be remembered for more than a day by anyone that has encountered him. Consequently, he is the perfect foil to this A.I. computer, as no one could ever remember him as to record his birth, thus he's off the grid and technically does not exist.

I recall that he may also have either a mutation that has caused him to have one hand that is larger than the other, or it's a transplanted hand from person a dark skinned Sub- Saharan descent. The main character is Caucasian (per the cover).

I suspect this MAY be a slightly misremembered A Gift from Earth by Larry Niven.

The action takes place on the planet Plateau in Tau Ceti. It is so-named because the only habitable portion of the planet is a huge flat mountain that rises out of the deadly atmosphere. The plateau is about the size of California, and divided into three areas bounded by large "steps" between them, with the lowest section being the largest.

When they landed, the crew of the original ship created a serf-like government by using the steps as borders and putting the colonists on the lower sections. They live on the smallest section at the top, and police absolutely anything. Any violation, no matter how small, is punishable by death and organ harvesting.

The plot involves a man who has the ability to make people simply not notice he's there. It takes him a long time to realize he even has this power. All he knows is that when he talks to people their eyes glaze over and they wander off. So for most of the book he thinks he's just really boring.

He further realizes that the effect is purely visual, so even things like security cameras ignore him as long as it's ultimately a guy looking at a screen. Only motion detectors and such are any threat.

When he realizes what's going on, he begins to use his "power" to bring down the government. The name of the story is due to a second plotline, the recent arrival of a package sent from Earth, containing a sort of artificial heart. This means you no longer have to harvest hearts, and the same tech can be used for other organs as well, threatening to overturn the entire "economy".

You are thinking of Mute by Piers Anthony.

Mute is science fantasy of mutation and psi: special mental powers. The protagonist, Knot, is a double mutant: he has a physical deformity, and the psi power to make others forget him.

Mute is a novel in which the mutant named Knot and the galactic agent named Finesse combat the Lobos who want to take over the Galactic Co-ordination Computer. 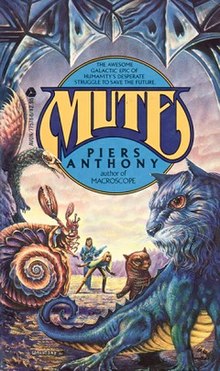 12
Older sci-fi novel: Girl meets stranded time traveller/wizard
6
Novel about a man finding a ring on an ancient planet that heals him
5
A human has psychic power that makes people forget that he is there. Including his parents
10
A sci-fi novel about augmented mental power
8
YA sci-fi/fantasy/horror book about a kid that has to overcome a lot of trials
2
Sci Fi book about ESP. Each person with ESP has just one power
7
Book about a man with an alien cop that lived inside him, healed him when needed and chased a fugitive