How was Domino able to be tortured when she was so lucky?

In Deadpool 2 why was Domino able to be tortured when her mutant power was being 'lucky'?

I understand that most mutants don't show their powers right away, eg

The majority of mutants develop these abilities, which vary from person to person, usually upon puberty, though there are some mutants who display powers and/or physical mutations from birth, or in their twenties. Some mutants even display abilities from within the womb and posthumously, like Professor Charles Xavier and Jean Grey, respectively.

And that some mutants are not able to control their powers when at this age, but Domino was sent to school for mutants and she obviously had her power and being lucky does not seem like a power that can be controlled in the first place. Was it that it was not working correctly due to her age or something else?

What was the reason for her to be able to be tortured as a young mutant?

I don't think we have an answer from the movie. But logically: her power isn't infinite.

Sure, she's lucky. For example, if one badguy tries to attack her, maybe he'll end up slipping on a banana peel and knocking himself out. But what if 10 badguys attack her? 100?

The answer of course depends on the needs of the plot, but the point is that her powers don't make her invulnerable from any danger without any limits.

You could also think about it in terms of long-term luck: if she hadn't been tortured, she wouldn't have been put on the path she's on. Or maybe the alternative to being tortured was somehow worse: maybe without her power, she would have been killed.

Or maybe she just didn't have her powers yet.

But in the end, we don't have an answer from the movie, so it's up to each viewer to come up with their own theories.

I don't think the movies explained this.

The comics, specifically the one Domino series seems particularly relevant to this though, through events shown through flashbacks.

In this continuity, Domino doesn't go to the Essex School. She was created as part of a secret government breeding program and was the only one to survive it (probably due to her power). We see that she is able to use her powers against them at least once in Domino #3, right on her 10th birthday. The doctors there (who she describes as being the closest thing she has to family although they treat her like a "cosmetics rat") taser her (on what seems to be the lowest albeit still painful setting) and she doesn't do anything to react.

They then give her a cat, let her get attached to it, then were going to taser it. Just before this happened, the one doctor who was allergic to cats sneezed and accidentally tasered the other doctor, which was obviously caused by Domino's powers. Because of this they brand her with a black tattoo over her eye so that she remembers what she did every time she looks in a mirror. The operation is briefly shown in Domino #1: 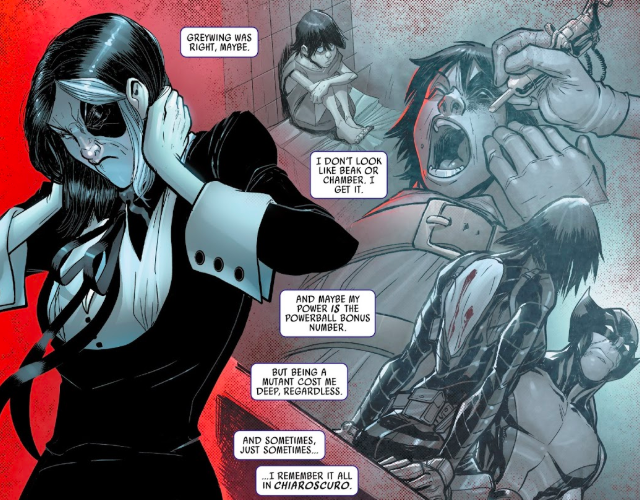 As you can see, she's restrained on the table, and it doesn't seem like luck is helping her.

Based on this I would say that it's likely that:

We don't know what form of torture Domino was subjected to, it did not have to be physical (which her luck would have probably counteracted) it might have been mental, or, if it was determined she could not be tortured directly possibly other children where tortured in her place, this in fact may have been her "luck" keeping her safe by putting others in her place. But this would be a form of torture for her.

18
How do the mutant levels correlate with the mutant classifications?
14
What happens if Hope copies Rogue?
0
Why didn't Xavier go back in time?
7
Why do mutants get their specific powers?
12
Does Rogue ever take advantage of the removable power suppression we see?
9
Why was Quicksilver vulnerable to Scarlet Witch's curse in the Decimation comics?
52
Is movie Deadpool's fourth wall breaking a "mutant power"?
4
Did something cause the mutant gene to disappear from occurring naturally in humans?