Book about kids with mental powers and aliens

I am looking to find the name of a book I read a few years ago, but cannot remember.

I have some information about the book from memory but after an hour searching google I am none the wiser.

A few bits of info

Intervention by Julian May. It's the novel linking the first series (Saga of Pliocene Exiles) and the second series (Galactic Milieu).

It shows the childhood of the Remillard family who are all powerful psychics and the key players in both series. Earth is watched over by four alien races, who are debating whether or not to allow humans to join their interstellar society. 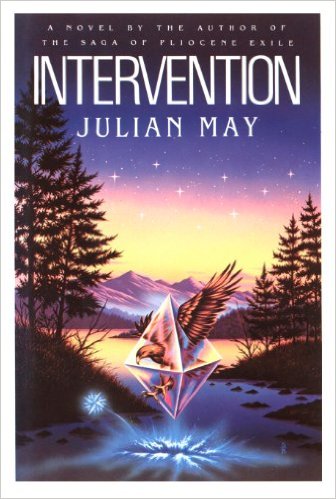 Not the answer you're looking for? Browse other questions tagged story-identification aliens powers or ask your own question.

10
Book series about time travel from future to distant past, psychic powers?

8
looking for early 2000's sci fi youth fiction set in future, kids have mental powers that let them simulate war
7
Sci-fi series with a war against pink blob-like bad guys who can mentally inflict pain
10
Aliens from different races hunt a weapon-lifeform that has gone rogue
12
Story where stardrive test-pilot visits alien solar system and is attacked by a psychic (alien) child
8
Comic book about guys with powers that are hunted by society
15
Which book on a deserted planet with a maze and an insane ancient creature?
6
Book with like 10 kids with powers and invading aliens