I read this book on an old kindle but sadly it broke down and I never got it fixed and haven't been able to find it since. The female lead becomes either a priestess or a wizard after the summoning/trasnporting since that's what she was role-playing as. I think there might be flame or fire in the title.

All the protagonists are adults and the FL is at some role play retreat thing cause of her husband/boyfriend, though he is not part of her party. Her party consists of 4/5 guys who are complete strangers to her. She is seen as the leader due to her hair that looks like flames due to some sort of prophecy in the other world. 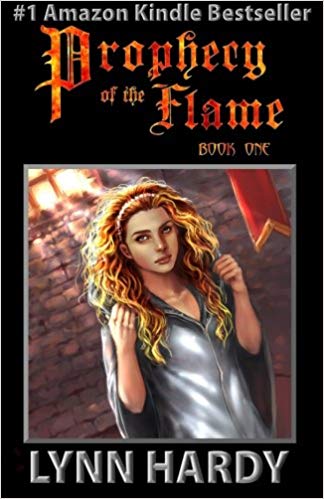 In a blinding flash of light, five strangers are yanked from this world and thrust into a land of sorcery as they are granted the looks and abilities of the people they were playing. This band of wannabe heroes soon discovers that having the powers they have always dreamed of, does not make life a dream come true. The Crusaders of the Light struggle to form a cohesive band as they blend twentieth century technology with the supernatural powers of this new world, fighting to liberate the kingdom of Cuthburan from the evil horde threatening humanity. Battle is also waged within Reba, an ordinary housewife who has become the most powerful mage on the planet, as she struggles to remain true to her wedding vows. Drawn against her will to the arms of Prince Alexandros, Reba must choose marriage toa [sic] handsome prince in a magical world or returning to the husband she left behind.

I can't find anything explicitly noting that it's her hair, but she does get saddled with the eponymous prophecy as per this review:

I connected most definitely with the main character, Archmage Reba who has suddenly become the one the prophecy has described to save the Kingdom of Cuthburan and even possibly the human race on this planet. She is also caught between the prophecy claiming that the "flamed one" should marry the oldest royal prince, or has this prophecy been somehow manipulated over time to portray something more than what it is.